At the beginning of 2013, we issued an Executive Briefing on the proposed take-over of Sprint-Nextel by Softbank, which we believed to be the starting gun for disruption in the US mobile market.

At the time, not only was 68% of revenue in the US market controlled by the top two operators, AT&T and Verizon, it was also an unusually lucrative market in general, being both rich and high-spending (see Figure 1, taken from the The Future Value of Voice & Messaging strategy report). Further, the great majority of net-adds were concentrated among the top two operators, with T-Mobile USA flat-lining and Sprint beginning to lose subscribers. We expected Sprint to initiate a price war, following a plan similar to Softbank’s in Japan, separating the cost of devices from that of service, making sure to offer the hero smartphone of the day, and offering good value on data bundles.

Figure 1: The US, a rich country that spends heavily on telecoms 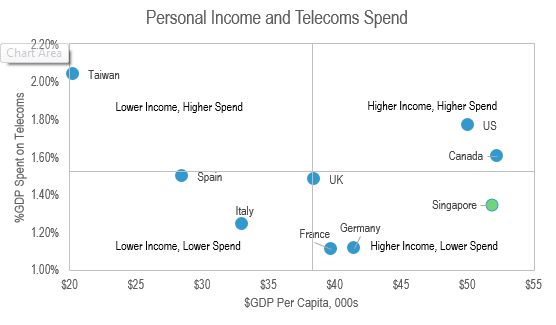 In the event, the fight for control of Sprint turned out to be more drawn out and complex than anyone expected. Add to this the complexity of Sprint’s major network upgrade, Network Vision, as shown in Figure 2, and the fact that the plans changed in order to take advantage of Softbank’s procurement of devices for the 2.5GHz band, and it is perhaps less surprising that we have yet to see a major strategic initiative from Sprint.

Figure 2: The Softbank deal brought with it major changes to Network Vision 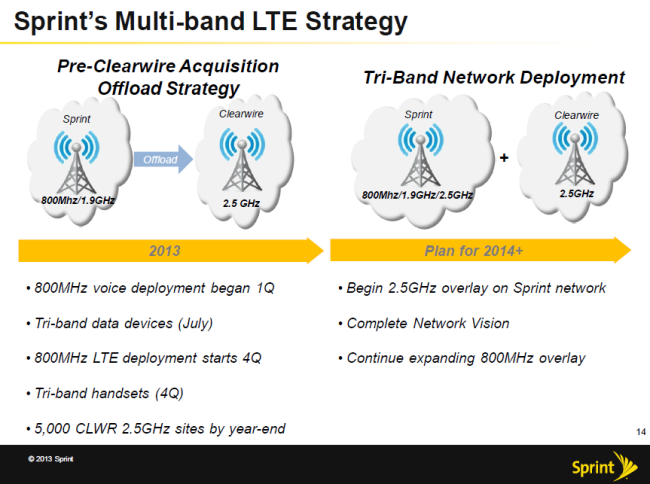 Instead, T-Mobile USA implemented a very similar strategy, having completed the grieving process for the AT&T deal and secured investment from DTAG for their LTE roll-out and spectrum enhancements. So far, their “uncarrier” strategy has delivered impressive subscriber growth at the expense of slashing prices. The tale of 2013 in terms of subscribers can be seen in the following chart, updated from the original Sprint/Softbank note. (Note that AT&T, VZW, and T-Mobile have released data for calendar Q3, but Sprint hasn’t yet – the big question, going by the chart, will be whether T-Mobile has overtaken Sprint for cumulative net-adds.)

Figure 3: The duopoly marches on, T-Mobile recovers, Sprint in trouble 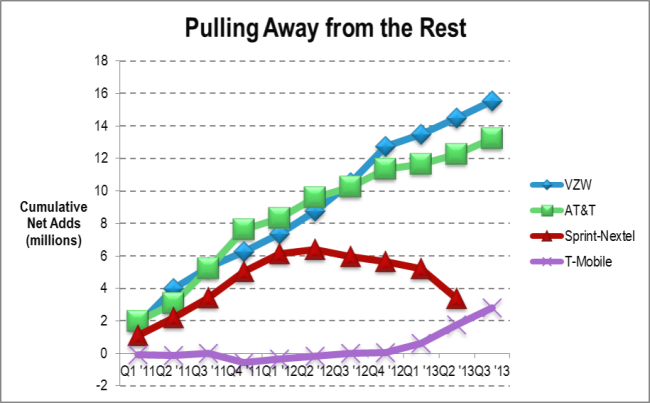 However, Sprint did have a major strategic initiative in the last two years – and one that went badly wrong. We refer, of course, to the shutdown of the Nextel half of Sprint-Nextel.

There is much that is good inside Sprint, which explains both why so much effort went into its “turnaround” and why Masayoshi Son was interested. For example, its performance in terms of ARPU is strong, to say the least. The following chart, Figure 4, illustrates the point. Total ARPU in post-paid, which is most of the business, is both high at just under $65/mo and rising steadily. ARPU in pre-paid is essentially flat around $25/mo. The problem was Nextel and specifically, Nextel post-paid – while pre-paid hovered around $35/mo, post-paid trended steadily down from $45/mo to parity with pre-paid by the end. 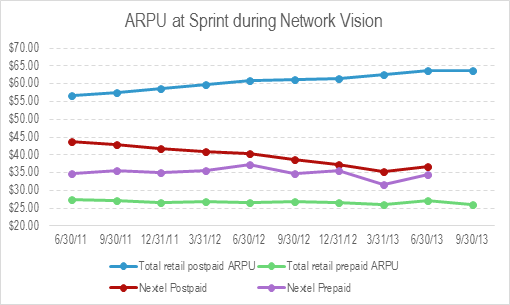 The difference between the two halves of Sprint that were doing the work here is fairly obvious. Nextel’s unique iDEN network was basically an orphan, without a development path beyond the equivalent of 2005-era WCDMA speeds, and without smartphones. Sprint CDMA, and later LTE, could offer wireless broadband and could offer the iPhone. Clearly, something had to be done. You can see the importance of smartphone adoption from the following graphic, Figure 5, showing that smartphones drove ARPU on Sprint’s CDMA network. 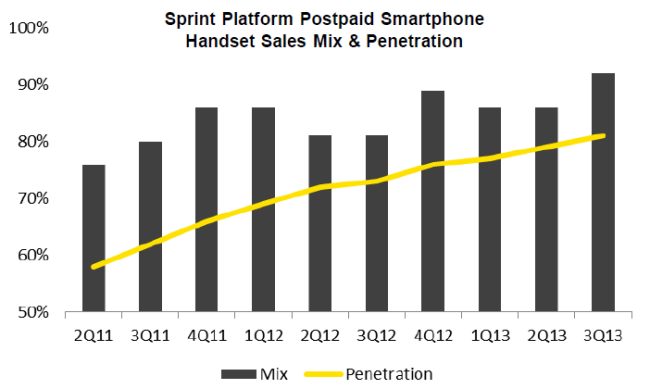 It is true that smartphones create opportunities to substitute OTT voice and messaging, but this is less of a problem in the US. As the following chart from the Future Value of Voice and Messaging strategy report shows, voice and messaging are both cheap in the US, and people spend heavily on mobile data. 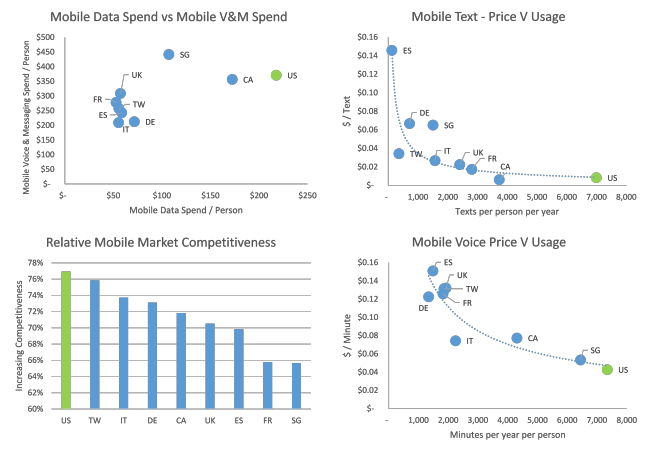 So far, the pull effect of better devices on data usage has helped Sprint grow revenues, while it also drew subscribers away from Nextel. Sprint’s strategy in response to this was to transition Nextel subscribers over to the mainline platform, and then shut down the network, while recycling savings and spectrum from the closure of Nextel into their LTE deployment.