How should governments regulate 5G?

The old regulatory models are less relevant for 5G

Regulators in different markets around the world have a tried and tested formula for making spectrum available for new networks and for regulating the operators that run those networks. They have successfully used this formula for 2G, 3G, and 4G.

However, 5G is different and may require a different approach for both licensing spectrum and for regulating mobile network operators’ services. As we outline in the section 5G benefits industry and society, unlike its predecessors, 5G is not simply a faster pipe which therefore benefits individual end-users. Instead, it has been designed with new capabilities that can have a profound effect on enterprises and entire industries.

These capabilities and how they compare to LTE and to other wireless technologies are outlined in the Appendix. Because 5G can create so much value to all constituents of society, STL Partners contends that the focus of governments and regulators should be in ensuring that:

Put simply, our analysis suggests that the upside from rapid 5G deployment far outweighs the short-term benefits of high spectrum licensing fees. From a pure economic perspective, 5G should contribute an additional $1.4 trillion of Gross Domestic Product globally in 20301. The higher rates of employment, corporate profits, and consumer spending associated with this increased GDP will translate into significant increases in receipts of corporation and income taxes, national insurance contributions, and sales tax for governments as well as enhanced national competitiveness.

These annual inflows to the public purse will be far bigger than the one-off payment from licensing spectrum. But these benefits only accrue if 5G is deployed quickly and effectively so that its full potential is realised by industry in each market. A slow 5G rollout risks enterprises investing in workaround solutions that do not require 5G and do not generate the same value.

A focus on short-term auction fees could be counter-productive as it may inhibit operators’ ability to invest aggressively in rolling out 5G. But as we show in graphic below, it is easy to administer, shows the regulator is ‘doing a good job’, and results in higher short-term economic benefits. We believe that governments need to look at the longer-term sustainable benefits of 5G deployment and, potentially, opt for spectrum licensing ‘beauty contests’ – in which spectrum is allocated on a detailed raft of requirements such as rollout speed and network performance – rather than auctions. Such an approach may require input beyond the telecommunications regulator. For example, the treasury, health and social welfare, business, transport and energy ministries might also be needed to evaluate whether a spectrum beauty contest offers a better social and economic return than a spectrum auction.

And it’s not all about money, globally 5G could result in 1 billion patients with improved access to healthcare globally in 20302. Governments, therefore, need to evaluate the social benefits of 5G as well as the economic ones. But managing a regulatory approach for 5G via input from different government departments is complex and may require management at the highest level. 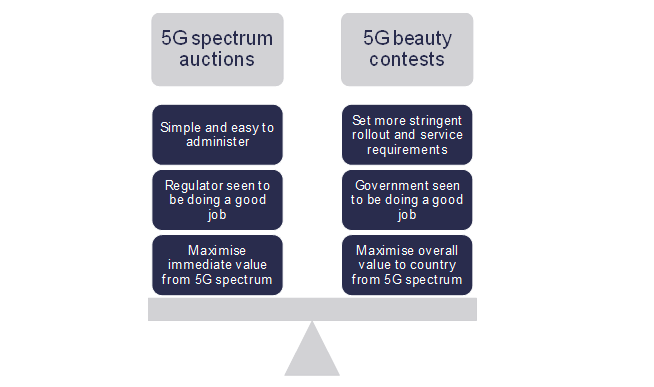 Recognising that not all markets are the same

While we have outlined above a bias towards spectrum beauty contests over auctions for 5G, it is important to note that the right approach will vary by country. Based on what we have already seen from the 5G deployments and announcements in 2018 and 2019, there is a clear delineation between countries in their 5G rollout speed. We have segmented markets into three types in Figure 2:

The table below outlines reasons why segments are operating at different 5G rollout speeds and offers suggestions for how governments might wish to stimulate operator 5G investment in each segment. 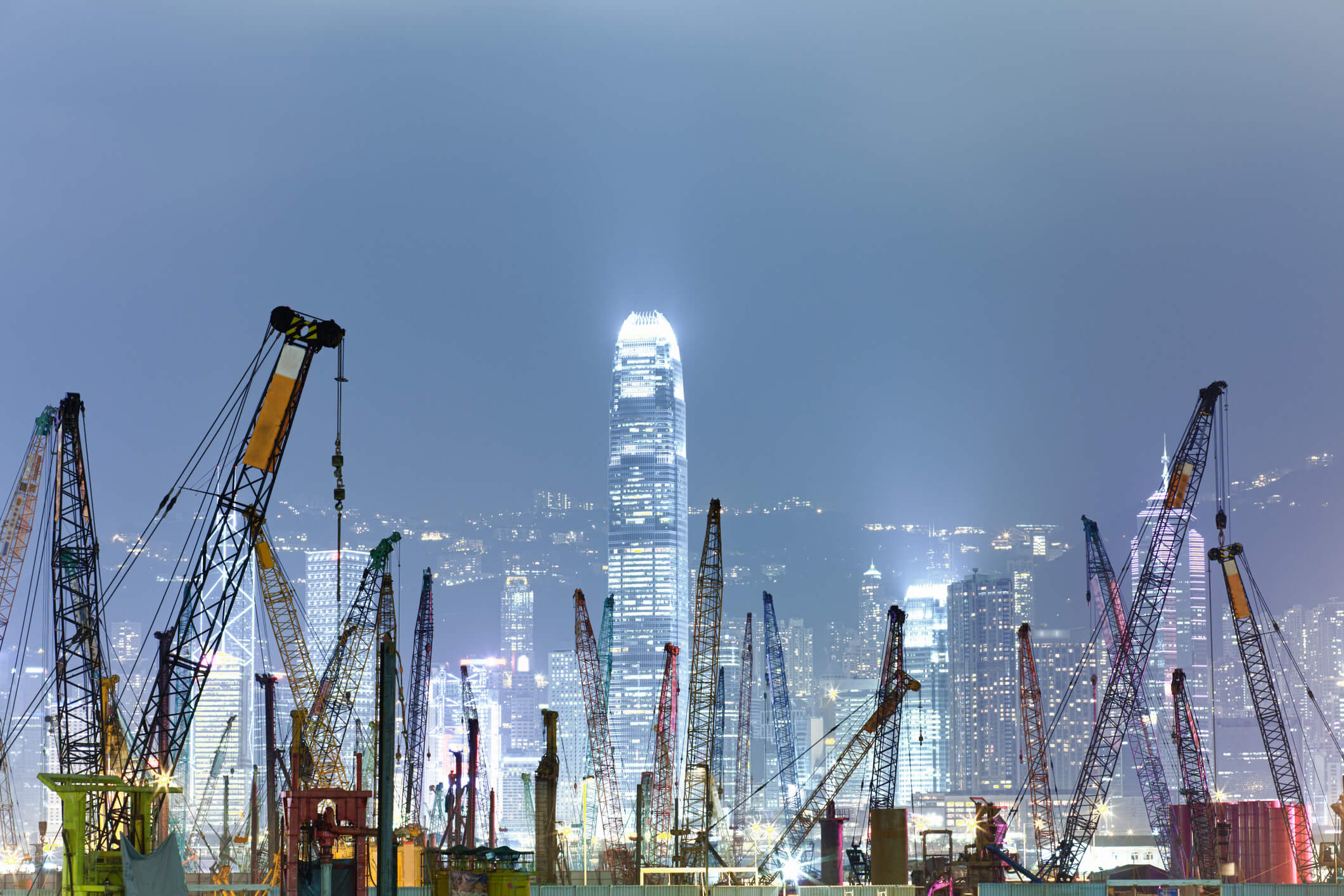 The Industrial IoT is a confusing world

This report is the final report in a mini-series about the Internet for Things (I4T), which we see as the next stage of evolution from today’s IoT.

The first report, The IoT is dead: Long live the Internet for Things, outlines why today’s IoT infrastructure is insufficient for meeting businesses’ needs. The main problem with today’s IoT is that every company’s data is locked in its own silo, and one company’s solutions are likely deployed on a different platform than their partners’. So companies can optimise their internal operations, but have limited scope to use IoT to optimise operations involving multiple organisations.

The second report, Digital twins: A catalyst of disruption in the Coordination Age, provides an overview of what a digital twin is, and how they can play a role in overcoming the limitations of today’s IoT industry.

This report looks more closely at the state of development of enterprise and industrial IoT and the leading players in today’s IoT industry, which we believe is a crucial driver of the Coordination Age. In the Coordination Age, we believe the crucial socio-economic need in the world – and therefore the biggest business opportunity – is to make better use of our resources, whether that is time, money, or raw materials. Given the number of people employed in and resources going through industrial processes, figuring out what’s needed to make the industrial IoT reach its full potential is a big part of making this possible.

There are three ways of dividing up the types of IoT applications. As described by IoT expert Stacey Higginbotham, each group has distinct needs and priorities based on their main purpose:

The Internet for Things (I4T) is in large part about bridging the divide between Enterprise and Industrial IoT. The idea is to be able to share highly sensitive industrial information, such as a change in operational status that will affect a supply chain, or a fault in public infrastructure like roads, rail or electricity grid, that will affect surroundings and require repairs. This requires new solutions that can coordinate and track the movement of Industrial IoT data into Enterprise IoT insights and actions.

Understandably, enterprises are way of opening any vulnerabilities into their operations through deeper or broader connections, so finding a secure way to bring about the I4T is the primary concern.

The proliferation of IoT platforms

Almost every major player in the ICT world is pitching for a role in both Enterprise and Industrial IoT. Most largescale manufacturers and telecoms operators are also trying to carve out a role in the IoT industry.

By and large, these players have developed specific IoT solutions linked to their core businesses, and then expanded by developing some kind of “IoT platform” that brings together a broader range of capabilities across the IT stack necessary to provide end-to-end IoT solutions.
The result is a hugely complex industry with many overlapping and competing “platforms”. Because they all do something different, the term “platform” is often unhelpful in understanding what a company provides.

A company’s “IoT platform” might comprise of any combination of these four layers of the IoT stack, all of which are key components of an end-to-end solution: 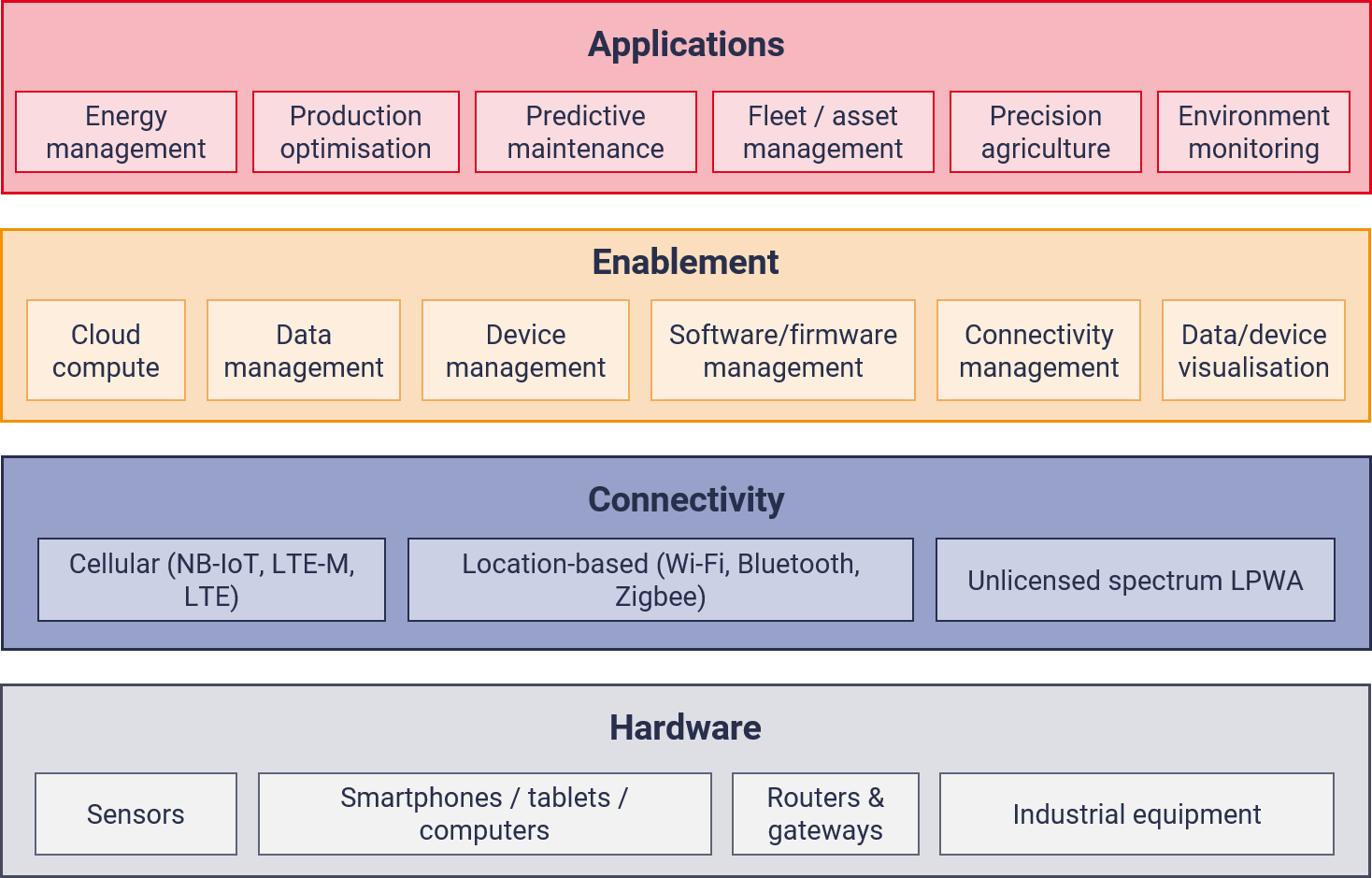 There are two key reasons why platforms offering end-to-end services have dominated the early development of the IoT industry:

Making sense of the confusion

It is a daunting task to work out how to bring IoT into play in any organisation. It requires a thorough re-think of how a business operates, for a start, then tinkering with (or transforming) its core systems and processes, depending on how you approach it.

That’s tricky enough even without the burgeoning market of self-proclaimed “leaders of industrial IoT” and technology players’ “IoT platforms”.

This report does not attempt to answer “what is the best way / platform” for different IoT implementations. There are many other resources available that attempt to offer comparisons to help guide users through the task of picking the right tools for the job.

The objective here is to gain a sense of what is real today, and where the opportunities and gaps are, in order to help telecoms operators and their partners understand how they can help enterprises move beyond the IoT, into the I4T.