Very weak Q1 2014 results from Telefonica and other European players

Telefonica’s efforts to transition to a new Telco 2.0 business model are well-regarded at STL Partners.  The company, together with SingTel, topped our recent Telco 2.0 Transformation Index which explored six major Communication Service Providers (AT&T, Verizon, Telefonica, SingTel, Vodafone and Ooredoo) in depth to determine their relative strengths and weaknesses and provide specific recommendations for them, their partners and the industry overall.

But Telefonica’s Q1 2014 results were even worse than recent ones from two other European players, Deutsche Telekom and Orange, which both posted revenue declines of 4%.  Telefonica’s Group revenue came in at €12.2 billion which was down 12% on Q1 2013.  Part of this was a result of the disposal of the Czech subsidiary and weaker currencies in Latin America, in which around 50% of revenue is generated.  Nevertheless, the negative trend for Telefonica and other European players is clear.

As the first chart in Figure 1 shows, Telefonica’s revenues have followed a gentle parabola over the last eight years.  They rose from 2006 to 2010, reaching a peak in Q4 of that year, before declining steadily to leave the company in Q1 2014 back where it started in Q1 2006.

The second chart, however, adds more insight.  It shows the year-on-year percentage growth or decline in revenue for each quarter.  It is clear that between 2006 and 2008 revenue growth was already slowing down and, following the 2008 economic crisis in which Spain (which generates around quarter of Telefonica’s revenue) was hit particularly hard, the company’s revenue declined in 2009.  The economic recovery that followed enabled Telefonica to report growth again in 2010 and 2011 before the underlying structural challenges of the telecoms industry – the decline of voice and messaging – kicked in, resulting in revenue decline since 2012.

Figure 1: Telefonica’s growth and decline over the last 8 years 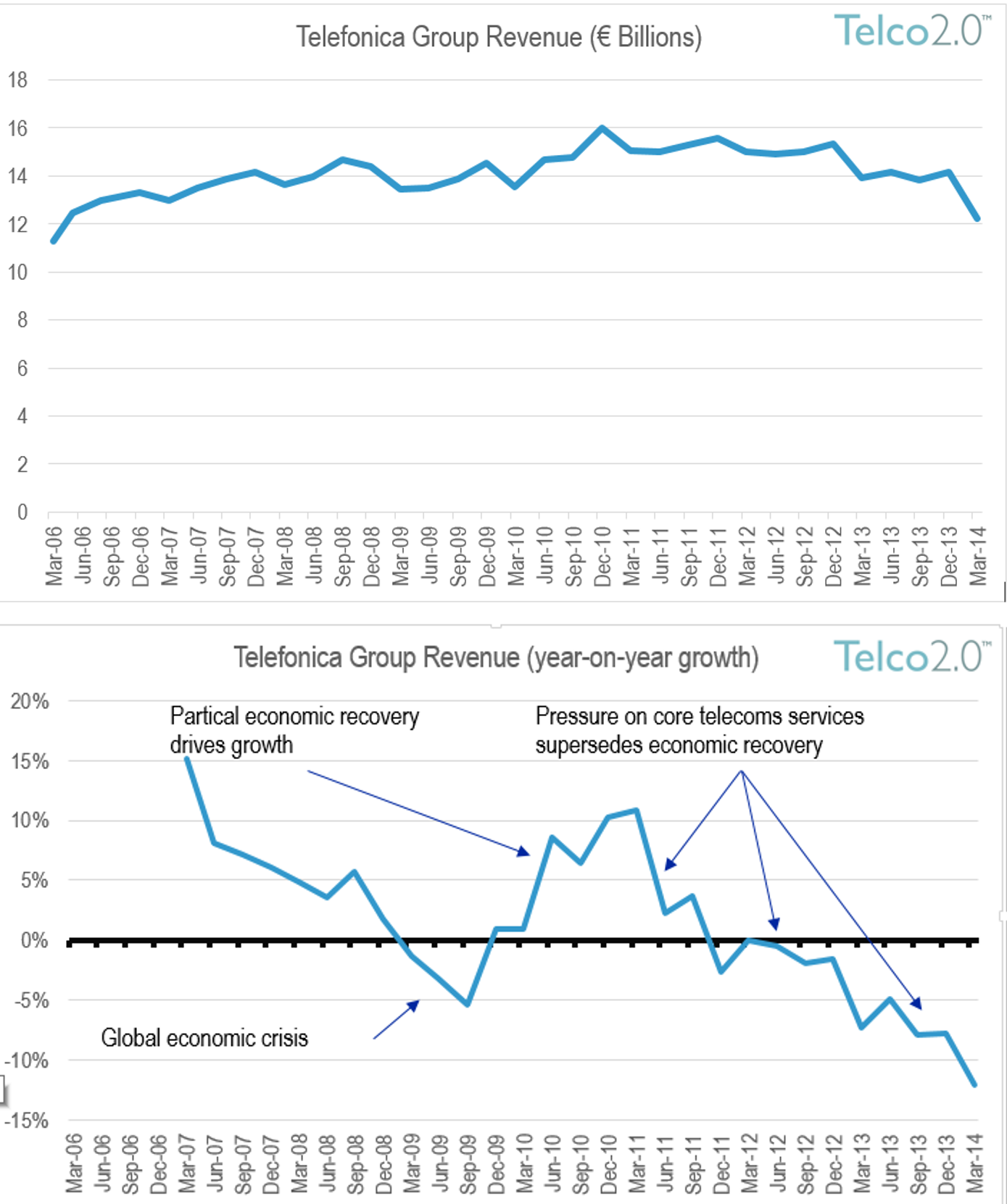 One thing is clear: the only way is down for most CSPs and for the industry overall

The biggest concern for Telefonica and something that STL Partners believes will be replicated in other CSPs over the next few years is the accelerating nature of the decline since the peak.  It seems clear that Telco 1.0 revenues are not going to decline in a steady fashion but, once they reach a tipping point, to tumble away quickly as:

The results of the European CSPs confirms STL Partners belief that the outlook for the global industry in the next few years is negative overall.  It is clear that telecoms industry maturity is at different stages globally:

Given these different mixes, STL Partners reaffirms its forecast of 2012 that overall the industry will contract by up to 10% between 2013 and 2017 as core Telco 1.0 service revenue decline accelerates once more and more countries get beyond the peak.  This is illustrated for the mobile industry in Figure 2, below. 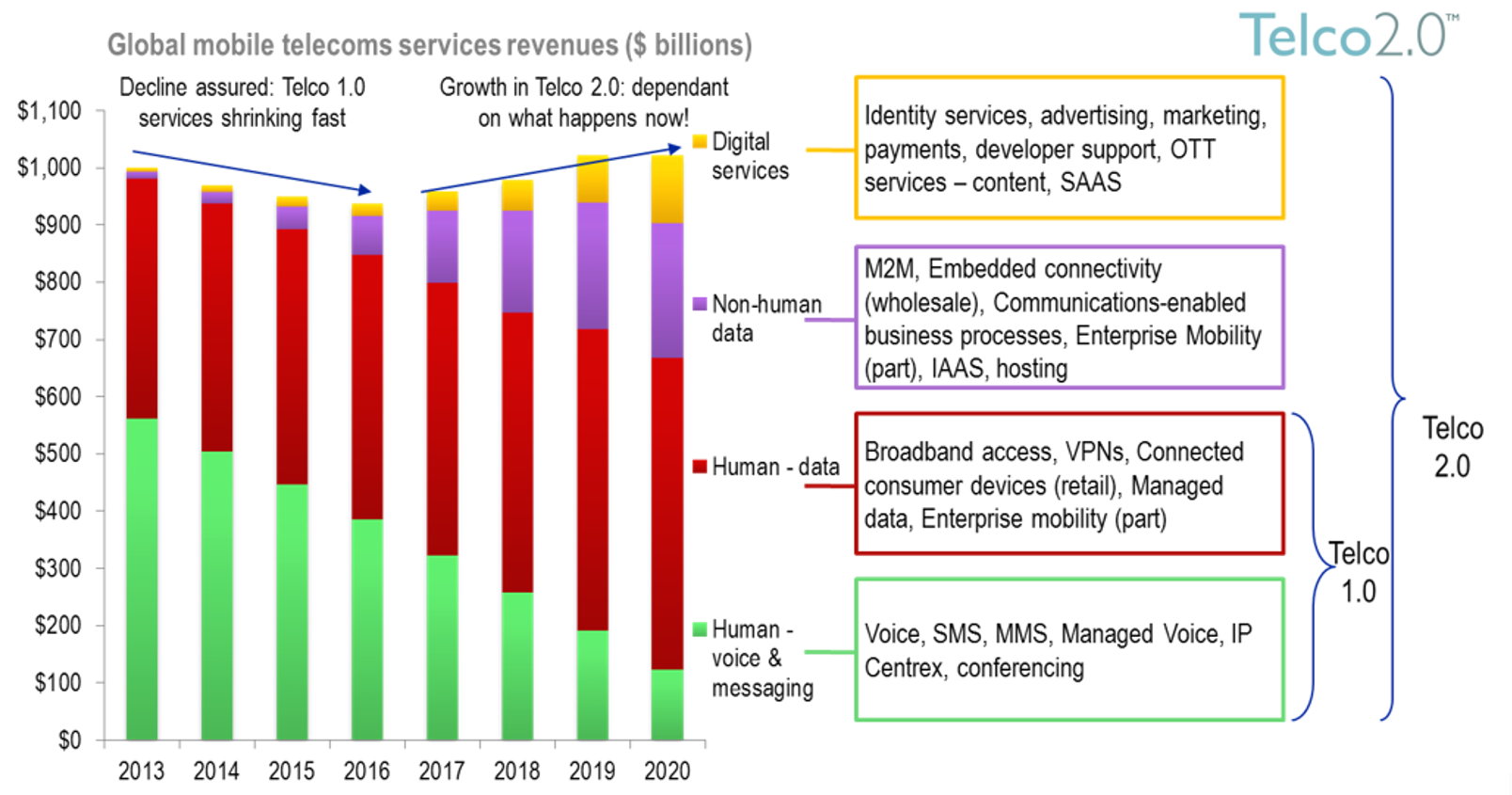 Upturn in telecoms industry fortunes after 2016 dependent on current activities

If the downturn to 2016 is a virtual certainty, the shape of the recovery beyond this, which STL Partners (tentatively) forecasts, is not. The industry’s fortunes could be much better or worse than the forecast owing to the importance of transformation activities which all players (CSPs, Network Equipment Providers, IT players, etc.) need to make now.

The growth of what we have termed Human Data (personal data for consumers and business customers, including some aspects of Enterprise Mobility), Non-Human Data (connection of devices and applications – Internet of Things, Machine2Machine, Infrastructure as a Service, and some Enterprise Mobility) and Digital Services (end-user and B2B2X enabling applications and services) requires CSPs and their partners to develop new skills, assets, partnerships, customer relationships and operating and financial models – a new business model.

As IBM found in moving from being hardware manufacturer to a services player during the 1990’s, transforming the business model is hard.  IBM was very close to bankruptcy in the early 90’s before disrupting itself and re-emerging as a dominant force again in recent years.  CSPs and NEPs, in particular, are now seeking to do the same and must act decisively from 2013-2016 if they are to enjoy a rebirth rather than continued and sustained decline.