This is an extract of two sections of the latest Telco 2.0 Strategy Report The Future Value of Voice and Messaging for members of the premium Telco 2.0 Executive Briefing Service.

The Transition in User Behaviour

A global change in user behaviour

In November, 2012 we published European Mobile: The Future’s not Bright, it’s Brutal. Very soon after its publication, we issued an update in the light of results from Vodafone and Telefonica that suggested its predictions were being borne out much faster than we had expected.

Essentially, the macro-economic challenges faced by operators in southern Europe are catalysing the processes of change we identify in the industry more broadly.

This should not be seen as a “Club Med problem”. Vodafone reported a 2.7% drop in service revenue in the Netherlands, driven by customers reducing their out-of-bundle spending. This sensitivity and awareness of how close users are getting to their monthly bundle allowances is probably a good predictor of willingness to adopt new voice and messaging applications, i.e. if a user is regularly using more minutes or texts than are included in their service bundle, they will start to look for free or lower cost alternatives. KPN Mobile has already experienced a “WhatsApp shock” to its messaging revenues. Even in Vodafone Germany, voice revenues were down 6.1% and messaging 3.7%. Although enterprise and wholesale business were strong, prepaid lost enough revenue to leave the company only barely ahead. This suggests that the sizable low-wage segment of the German labour market is under macro-economic stress, and a shock is coming.

The problem is global, for example, at the 2013 Mobile World Congress, the CEO of KT Corp described voice revenues as “collapsing” and stated that as a result, revenues from their fixed operation had halved in two years. His counterpart at Turk Telekom asserted that “voice is dead”.

The combination of technological and macro-economic challenge results in disruptive, rather than linear change. For example, Spanish subscribers who adopt WhatsApp to substitute expensive operator messaging (and indeed voice) with relatively cheap data because they are struggling financially have no particular reason to return when the recovery eventually arrives.

Price is not the only issue

Also, it is worth noting that price is not the whole problem. Back at MWC 2013, the CEO of Viber, an OTT voice and messaging provider, claimed that the app has the highest penetration in Monaco, where over 94% of the population use Viber every day. Not only is Monaco somewhere not short of money, but it is also a market where the incumbent operator bundles unlimited SMS, though we feel that these statistics might slightly stretch the definition of population as there are many French subscribers using Monaco SIM cards. However, once adoption takes off it will be driven by social factors (the dynamics of innovation diffusion) and by competition on features.

The interaction styles and use cases of new voice and messaging apps that have been adopted by users are frequently quite different to the ones that have been imagined by telecoms operators. Between them, telcos have done little more than add mobility to telephony during the last 100 years, However, because of the Internet and growth of the smartphone, users now have many more ways to communicate and interact other than just calling one another.

SMS (only telcos’ second mass ‘hit’ product after voice) and MMS are “fire-and-forget” – messages are independent of each other, and transported on a store-and-forward basis. Most IM applications are either conversation-based, with messages being organised in threads, or else stream-based, with users releasing messages on a broadcast or publish-subscribe basis. They often also have a notion of groups, communities, or topics. In getting used to these and internalising their shortcuts, netiquette, and style, customers are becoming socialised into these applications, which will render the return of telcos as the messaging platform leaders with Rich Communication System (RCS) less and less likely. Figure 1 illustrates graphically some important psychological and social benefits of four different forms of communication. 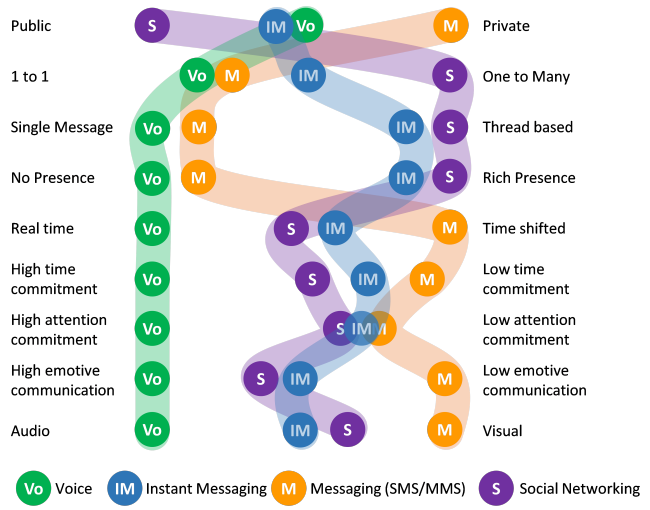 The different benefits can clearly be seen. Taking voice as an example, we can see that a voice call could be a private conversation, a conference call, or even part of a webinar. Typically, voice calls are 1 to 1, single instance, and with little presence information conveyed (engaged tone or voicemail to others). By their very nature, voice calls are real time and have a high time commitment along with the need to pay attention to the entire conversation. Whilst not as strong as video or face to face communication, a voice call can communicate high emotion and of course is audio.

SMS has very different advantages. The majority of SMS sent are typically private, 1 to 1 conversations, and are not thread based. They are not real time, have no presence information, and require low time commitment, because of this they typically have minimal attention needs and while it is possible to use a wide array of emoticons or smileys, they are not the same as voice or pictures. Even though some applications are starting to blur the line with voice memos, today SMS messaging is a visual experience.

Instant messaging, whether enterprise or consumer, offers a richer experience than SMS. It can include presence, it is often thread based, and can include pictures, audio, videos, and real time picture or video sharing. Social takes the communications experience a step further than IM, and many of the applications such as Facebook Messenger, LINE, KakaoTalk, and WhatsApp are exploiting the capabilities of these communications mechanisms to disrupt existing or traditional channels.

Voice calls, whether telephony or ‘OTT’, continue to possess their original benefits. But now, people are learning to use other forms of communication that better fit the psychological and social advantages that they seek in different contexts. We consider these changes to be permanent and ongoing shifts in customer behaviour towards more effective applications, and there will doubtless be more – which is both a threat and an opportunity for telcos and others.

The applicable model of how these shifts transpire is probably a Bass diffusion process, where innovators enter a market early and are followed by imitators as the mass majority. Subsequently, the innovators then migrate to a new technology or service, and the cycle continues.

One of the best predictors of churn is knowing a churner, and it is to be expected that users of WhatsApp, Vine, etc. will take their friends with them. Economic pain will both accelerate the diffusion process and also spread it deeper into the population, as we have seen in South Korea with KakaoTalk.

High-margin segments are more at risk

Generally, all these effects are concentrated and emphasised in the segments that are traditionally unusually profitable, as this is where users stand to gain most from the price arbitrage. A finding from European Mobile: The Future’s not Bright, it’s Brutal and borne out by the research carried out for this report is that prices in Southern Europe were historically high, offering better margins to operators than elsewhere in Europe. Similarly, international and roaming calls are preferentially affected – although international minutes of use continue to grow near their historic average rates, all of this and more accrues to Skype, Google, and others. Roaming, despite regulatory efforts, remains expensive and a target for disruptors. It is telling that Truphone, a subject of our 2008 voice report, has transitioned from being a company that competed with generic mobile voice to being one that targets roaming.