At our November Telco 2.0 brainstorm, the second session concentrated on the business opportunity in the core voice and messaging business. Here we review the key messages, and explore some of the future business model scenarios.

Telcos have consistently abandoned their core product, and are ignoring new business models, whilst pursuing fools’ gold in media content. The timing of this discussion is rather apposite. Despite our belief in Vodafone’s long-term strength, they have just announced that their core voice business has stagnated:

The performance of the company’s European operations suffered from the tough economic climate with margins decreasing from 38.2% to 36.2% on revenues that were down 1.1% on an organic basis. The company blamed ongoing price pressure on core voice and messaging services.

As we said before, if you don’t improve your core product at all since launching digital networks, and assume two-sided Internet business models won’t have any effect on you, you get all you deserve. Please see our Voice & Messaging 2.0 report?]

The lead-in to the session was by Chief Analyst of STL Partners, Martin Geddes. His thesis is a simple one: telcos have consistently abandoned their core product, and are ignoring new business models, whilst pursuing fools’ gold in media content. The old model — charging users for software services that have no marginal cost or barriers to entry — is dying. That doesn’t stop initiatives like Rich Communications Suite (RCS) from trying.

To illustrate future business models he gave three examples of how money could be made in future. Each of these focused on different aspects of the consumer to call centre interaction. As you may remember, customer care is one of the key B2B2C value-added services in a Telco 2.0 platform. [For full details, see our report The 2-Sided Telecoms Market Opportunity.]

The first of these was from a Canadian start-up we’ve profiled before, called Fonolo. It exquisitely demonstrates that the value is in integration of telephony and the Web, as well as moving from the call itself to the set-up of the interaction. We asked their CEO, Shai Berger, to tell us more in this video clip:

Note that their current business model is a mixture of advertising and end-user premium fees. This is being positioned as a traditional consumer VAS, with a sprinkling of two-sided markets via advertising. The question, however, is who benefits more: the consumer, or the call centre? We think that it’s the latter, and the consumer is the price-sensitive side. The call centre wants the maximum rate of self-care, high customer satisfaction, and the web site offers the ability to do all kinds of enhanced multi-modal interactions that a 0-9*# keypad can’t do well. Even basic things like showing where you are in the queue, and a picture of the person you’re talking to, would make for a far better user experience.

Therefore in our two-sided market world, we’d get telcos to distribute and promote this tool (on their fixed, mobile and on-device portals). They would then sell these enhanced capabilities to call centres.

The second example Martin gave was around outbound calling from call centres. Today the typical experience is something like the following. The call centre operator has to wait for the phone to ring, finds it goes to voicemail (up to 80% of calls to business users go to voicemail), and then leaves a message asking the user to call back to complete the business process. By the time the user gets the message, the call centre may be closed. Or the user simply never responds. So you’re burning labour on leaving these messages, in a process that is both ineffective and inefficient. According to Oracle, customer service representatives making outbound calls typically spend 20-30 minutes per hour talking to customers. The rest is wasted.

A better experience would be simply to deposit a VoiceXML document directly into the user’s voicemail system. “The product you have requested is now in stock. Press one to have it shipped immediately, two to reschedule your delivery, three to cancel.��? The business process completes right their inside your voicemail system. And the telco collects and order of magnitude more revenue than they would get from a few cents of termination fee.

The third and final example was more futuristic, looking at how Paypal-like services could be brought from the Internet to telephony, taking out the errors, cost and fraud on today’s information and transactional exchanges to call centres.

These were just a few examples on how to re-imaging telephony to service the needs of call centres. There are many more such examples, and many more business processes to integrate. Telephony could easily become a growth engine again for telecoms, if only telcos would wake up to the new two-sided business model.

The next speaker was JP Rangaswami from BT. Excluding the (important) access line revenue, BT only makes a small fraction of its revenue from telephony. Nonetheless, it has embarked on a multi-billion pound programme to create the ultimate voice and communications platform with its 21CN network initiative. Under JP’s guidance, BT has also recently bought Ribbit, a platform that extends telephony integration to Web developers. Clearly BT understands there’s life in being a “phone company��? yet (as long as you’ve a two-sided business model, naturally). 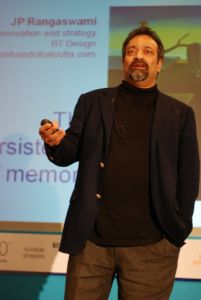 What JP proposed is that voice is a very much a feature, not the product. Using a Dali image to emphasise the strangeness and difference of the world we find ourselves in, he told his story through the history of two other media: the printed word, and photography.

In both of these cases, we’ve seen a mass democratisation and de-centralisation of the technology. Printing presses were centralised, and printing became an industry unto itself. It was a tool of control. For a while, there was a central printing shop in every company to do reprographics. Now, we see a “Print this page��? icon on your screen, and the printing press under your desk can smudge some ink on paper fibre for you in a moment, at a cost low enough you don’t even think about it. “Print��?, therefore, has simply been embedded into every other application. Likewise, imaging has gone from an industry into a feature. You don’t need to go twice to the photo shop, once to drop off your films, and again to pick up your prints. “Upload image��? is a standard feature of many web applications. It’s two clicks to share one from your photostream.

The message is that the model is undergoing fundamental change, and voice is following the same trajectory. Calls will increasingly be launched from within Web applications. Whoever can capture that context, enrich those interactions, and (particularly) ensure business processes complete will make the money. Carrying the data from A to B and counting minutes is not the model.

BT therefore clearly understands the nature of future business models, even if they are keeping their cards close to their chest in terms of execution. If their CEO can explain this to investors in a way they can grasp, and they can demonstrate some real revenues, then BT is seriously onto something.

Voice as a spice, not the meal

Our third presenter, Thomas Howe, is an independent consultant and blogger, and brings a hands-on perspective to using telco voice and messaging APIs to build a business. 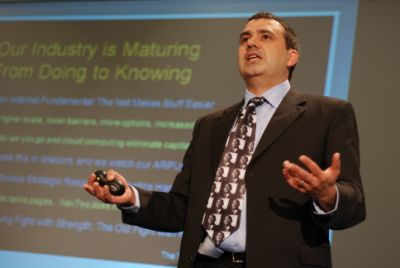 Thomas spoke about the new business model he sees for telcos. He sees the value is increasingly in knowing things about the customer, not doing things like moving bits around. Doing has become cheap and easy due to continued exponential improvements in technology. It’s hard-to-replicate data that provides business advantage, and telcos have that by the bucket load. In particular, telcos can combine the data with the network to offer new capabilities. It’s not particularly useful to know someone’s latitude and longitude. It is very useful to know if someone is at home, for example to take a delivery. That means understanding “someone��?, “at��? and “home��? — i.e. who are you, where are you, and what is “home��?? (This reflects our analysis on the seven questions any telco platform must answer.)

In the attendee feedback, there were three clear messages:

For readers interested in getting answers to these questions, and how to execute these ideas, we’ll be diving into these issues in our research in the run-up to the next Telco 2.0 brainstorm in the spring.

To summarise, existing voice platform initiatives like Parlay/OSA are network-centric, and what is needed is a business process centric approach. There are a few global commerce platform emerging, and none of them are from telcos. Yet there are already great telco successes in two-sided markets, such as SMS short codes and premium SMS. Telcos have to continue to build on these to service a wider range of business processes and upstream customers.

Meanwhile, astute attendees will have picked up the protestations of earlier keynote speaker Werner Vogels, CTO of Amazon. “And finally — our telecoms platform. Don’t worry, this is no threat to you.��? But he would say that, wouldn’t he?