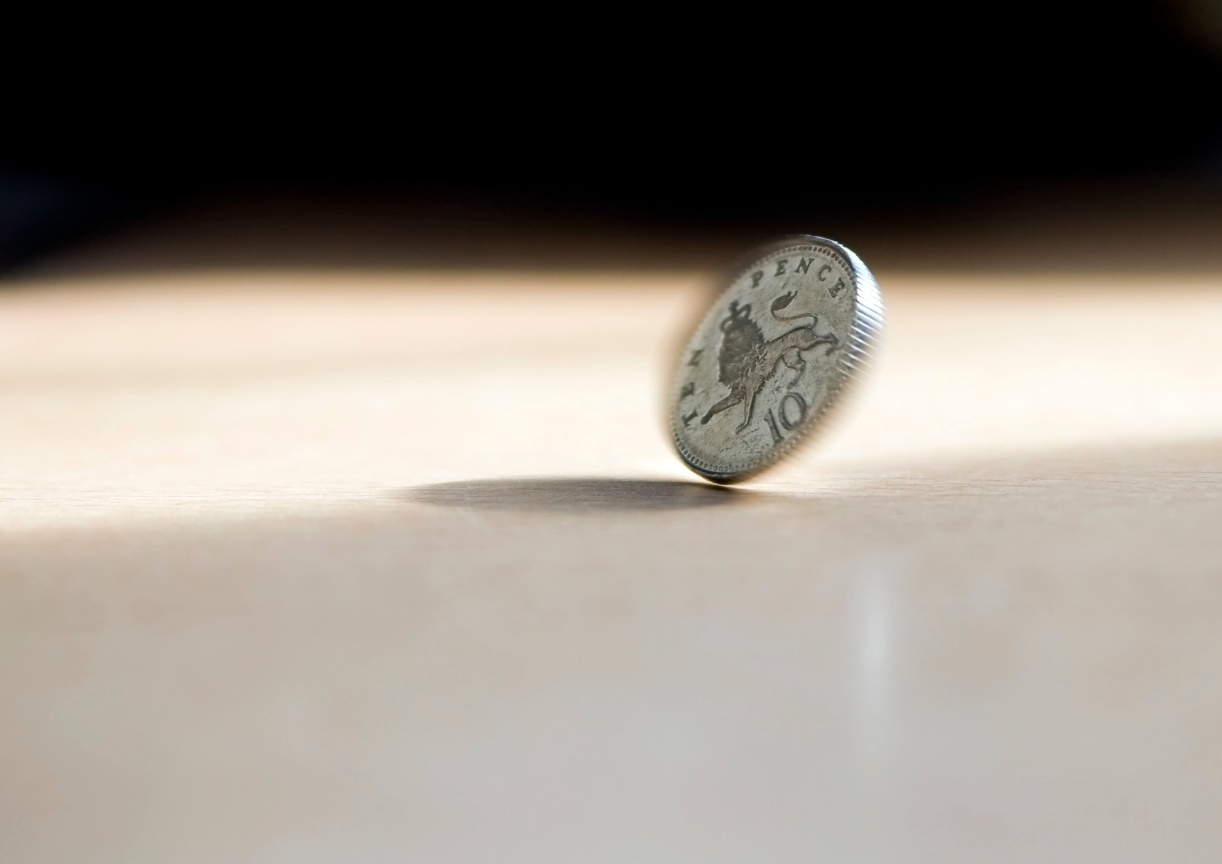 The 5G core is an instance of standardised, operationalised NFV

The 5G mobile core network as defined by the 3rd Generation Partnership Project (3GPP) standards body, along with the other network functions specific to 5G mobile networks (e.g. the Radio Access Network, or RAN), is intended to be ‘fully’ virtualised.

There are four main reasons for this, as set out below. The first two in the list relate more particularly to what we describe in this report as Phase 1 of the NFV project, as well as to the so-called Non-Standalone (NSA) 5G core. The last two reasons are dependent on capabilities being introduced as part of Phase 2 NFV and the Standalone (SA) mobile core:

There are serious questions as to whether the first two objectives in the above list have yet been adequately achieved, even in the context of 4G core (Evolved Packet Core: EPC) virtualisation let alone the context of the NSA 5G core (5GC). And in respect of the last two items in the list, there are many outstanding questions regarding the eventual technical and commercial models that will be adopted to support low-latency services from the network edge, and about the business models for network slicing in all its possible forms.Nonetheless, in the 3GPP 5G core, the industry has at least – and at last – reached agreement on a set of NFV standards, and has begun deploying and operating them as commercial 5G networks are rolled out. This is in stark contrast to the broader NFV project, where alignment around a set of industry-wide standards has proved elusive, although some momentum has built up around open-source programmes such as the Open Network Automation Platform (ONAP) and the Metro Ethernet Forum (MEF) in the past year or two.

The 5G networks that have been launched to date – which have all been done on the basis of the NSA core – are therefore an example of operationalised and standardised NFV that is finally delivering, albeit with the caveats expressed above.

In brief, 3GPP – and the many operators and vendors that have contributed to its work – have agreed on two 5GC standards. The first of these, the Non-Standalone (NSA) core (agreed as part of Release 15 of the standards, in December 2017), essentially involves using a virtualised and more ‘cloud-native’ version of the existing 4G core (or EPC) to support 5G New Radio (NR) wireless transmission in tandem with existing LTE services. This is illustrated in Figure 2 below: 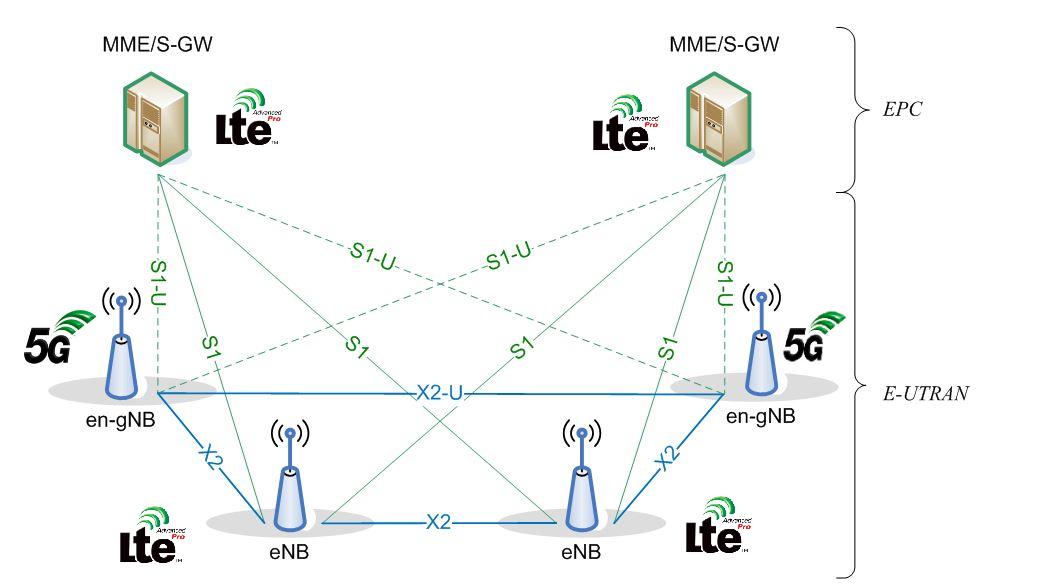 The purpose of the NSA core is to help facilitate a smooth and rapid introduction of 5G services by enabling telcos to reuse their existing virtual EPCs to support 5G NR, which in any case will be provided as a dual-band service – in combination with 4G, 3G and even 2G – for several years while 5G coverage is being built up.

The second of the 3GPP 5GC standards – the Standalone (SA) core – was first agreed in June 2018, also as part of Release 15. However, a further iteration of the SA specification is expected with Release 16, due in March 2020; and there may be further iterations in Release 17. As the name suggests, this is a completely new, 5G-only core. It has a simplified, ‘cloud-native’ and distributed architecture, and is designed to support services and functions such as network slicing, Ultra-Reliable Low-Latency Communications (URLLC) and enhanced Machine-Type Communications (eMTC, i.e. massive IoT). 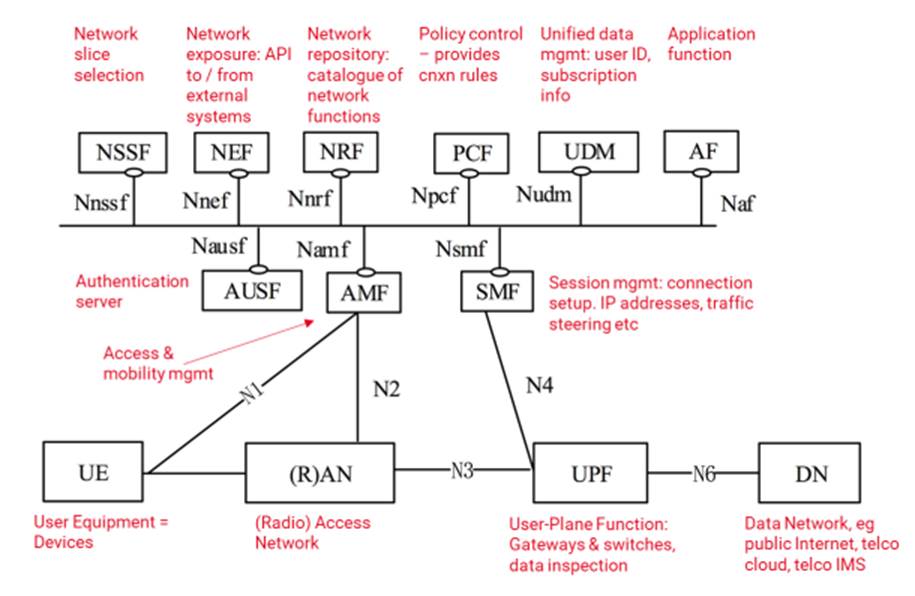 One major innovation compared with the 4G EPC is the decomposition of the Mobility Management Entity (MME) into two component parts: the Session Management Function (SMF) and the Access Management Function (AMF). This allows for optimisation of each of those functions to support increasingly complex use cases involving low-latency transmission of data, to and from multiple device types, across multiple network domains.

Each of the macro-level network functions illustrated in the above diagram are themselves composed of multiple ‘micro-services’ (smaller segments of software-based functionality) as part of the 5G core’s ‘cloud-native’ character. There are many formal, technical definitions of what ‘cloud-native’ means; but for our purposes, we take this term to mean that the software components forming part of a network function are disaggregated: broken up into loosely coupled ‘micro-services’ – containerised or otherwise – that are able in theory to be deployed, separately scaled and upgraded, orchestrated, and managed in innumerable permutations, configurations and distributions to support the demands of different use cases.

This means that not only the macro-level functions illustrated in the above diagram, but also the underlying micro-services, can in theory be adapted, recombined or exchanged with comparable micro-services from other vendors, to support the data-processing, security or mobility requirements of different use cases – although in the 3GPP standards, this can happen only within certain parameters in order not to compromise the integrity of specified services such as URLLC or eMTC.

The 5G core standards are designed for the ‘core’ telco business

The 3GPP standardisation effort has been driven by the desire to define and assure 5G network functionality, especially those aspects that relate to the ‘core’ telco business: connectivity. This is connectivity:

These are classic, core telco services of the first and second ‘ages’ of telecoms (the Communications Age and Information Age respectively), as described in a recent STL Partners report

These IoT / process-optimisation use cases represent services of the ‘third’ telco age (the Coordination Age), while digital content-rich services such as AR and VR can be viewed as advanced Information Age services.

In other words, the 5G core standards embody and perpetuate the view that the core (fundamental) telco business is providing standardised, commoditised, universally available and accessible connectivity services and platforms, over which predominantly third parties – as opposed to telcos themselves – develop and deliver useful and entertaining, value-generating, digital and coordination services. The 5G standards are for standard telcos – but we believe the potential of 5G for telcos can eventually be much more.