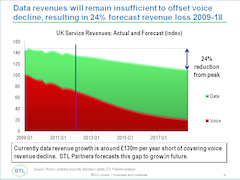 Below is an extract from this 16 page Telco 2.0 Report that can be downloaded in full in PDF format by members of the Telco 2.0 Executive Briefing service and the Telco 2.0 Transformation stream here. Non-members can subscribe here and for this and other enquiries, please email contact@telco2.net / call +44 (0) 207 247 5003.

It was clear at the Telco 2.0/New Digital Economics Brainstorm in London a few weeks ago that most executives across the European telecoms industry accept that the current telco business model is in decline (the ‘burning platform’), but wholehearted action to create sustainable new models is not in place.

Two thirds of delegates thought this leading indicator forecast ‘about right’ or ‘too optimistic’.

The core message to the leaders of the European telecoms industry is that they must make a more concerted effort to change direction now or will have much less control over their future destinies.

Some telcos are taking steps, but even the most advanced are still in experimental mode, and the rest somewhere between strategic slide-ware and tacit acceptance of a future as a ‘pipe’.

As well as prudent re-pricing of data and diligence in cost and efficiency management, the primary opportunities for telcos are to re-conceive the core communications proposition, re-define the overall experience of being a telco customer and ultimately to create interoperable multi-sided business models that help 3rd parties and end-users (people, organisations and devices) connect in more efficient and effective ways. These actions will create a more valuable and defensible role for telcos in the emerging digital economy.

To progress, the industry needs to overcome the following challenges:

Next steps for STL Partners and Telco 2.0

Telco 2.0 first described the core challenges facing the industry six years ago in ‘How to make money in an IP world‘, and proposed the ‘two-sided telecoms business model‘ as a key part of the solution four years ago. Over the last year we have published the ‘Roadmap to New Telco 2.0 Business Models‘ describing core innovations needed, and ‘Dealing with the Disruptors – Google, Apple, Facebook, Skype and Amazon‘ outlining strategies in the adjacent competitive landscape.

We’re now driving a range of implementation projects with individual players and collaborative consortiums and will be publishing a further detailed Telco 2.0 implementation guide later this year. Through our research we will also be benchmarking telcos’ strategies, to help the capital markets better understand how to make investment choices in the industry, and looking in-depth at creative strategies in voice and messaging, m-commerce, cloud services and M2M, as well as continuing our work with the World Economic Forum on one of the biggest prizes, how telcos can play a pivotal role in enabling the emergence of a new class of economic asset, ‘Personal Data‘.

The Platform is burning

Chris Barraclough, MD and Chief Strategist, Telco 2.0 / STL Partners, presented an example analysis of voice and data revenues from the UK market, and predicted a 24% decline from the peak in 2009 to 2018.

Delegates broadly supported this analysis, with over half saying they thought this was ‘about right’. We will be conducting and publishing further analysis in the top 5 European markets over the next few months.

NB The original ‘burning platform’ reference comes from this article describing a choice between certain death and possible death, and is now used to describe a situation where people are forced to act by dint of the alternative being somewhat worse. Nokia recently made ‘burning platform’ a famous phrase in the handset part of the telecoms sector, but it’s now relevant to telcos themselves as they face significant declines in their core revenues.

…Members of the Telco 2.0 Executive Briefing Subscription Service and the Telco 2.0 Transformation stream can download the full 16 page report in PDF format here. Non-Members, please subscribe here. For this or other enquiries, please email contact@telco2.net / call +44 (0) 207 247 5003.