Telco 2.0 is all about new business models telcos need in order to survive the crashing price of their staple product, voice. We reckon that addressing entirely different markets and needs — in particular the two-sided business model — is the answer. But sometimes it’s hard to explain this; so we came up with a new framework for it. So we’re going to try to work out what, precisely, goes into one of these “platforms” we keep talking about, how much of it there is, and eventually, how much it will cost.

To start, remember there are two things that go to make up this model:

1.) the ability for partners to re-package distribution assets (broadband networks, voice networks, etc.) independent of the telco’s own retail efforts, via rich new wholesale products; and

2.) B2B value-added services you build on top that use telco network and customer data assets to support largely non-telco business processes. In this article we’re just talking about the great big transaction platform that support the latter of these.

We assume the underlying infrastructure gets “Openreached” (for the access loops) or “Level(3)’d” (for the backbone). In other words, physical access ultimately becomes part of a multi-utility company, based off a model more like that for estate management, with 30+ year investment horizons and stable annunity rents. The core belongs to specialist wholesalers who thrive on volume. Also let’s assume telcos remain weak at feature-based product development (which seems fair). So, what is left? Quite a lot. But surely it’s now useless shorn of being an end-user services innovator? Absolutely not.

We’re talking authentication and identity here, based on the verified billing records in the BSS and OSS, plus security assets such as the SIM.

Mobile operators especially have a huge resource of information about location.

We already see some rich presence-and-availability services, though driven by a desperate bid to compete with Web 2.0 apps. Some instant messaging addicts (think of it as “digital chocolate”) spend a surprising amount of time updating avatars and mood messages to reflect their emotional state, not just doing one-to-one messaging. Capture these behaviours and you will create major opportunities in anything that involves changes of status. Presence is to time as cell-site location and GPS are to space — we just need to figure out the business model still.

Do you have credit?

All the data by-products of billing; telcos can make your application aware of money. The Internet can route packets, but not payments.

How can we reach you?

Operators not only can reach you via their own communications services, but often can associate together multiple addresses or identifiers.

Who do you know?

No-one has more social graph data than a telco. Users have invested their most previous assets — time and money — in creating this data. It’s very valuable.

However good the processes, there are always problems that have to be dealt with by a human being. Telcos have massive call-centre capability, and are used to providing support to both enterprises and consumers.
Does anyone really doubt that there’s money in those capabilities if they can be packaged and promoted appropriately?

The likely technical interfaces of the platform

Further, each one of these questions maps to a core-network entity and a network protocol, which permits us to sketch the design of the platform’s technical implementation. We talk a lot about open APIs, but now we can say very roughly that we need an interface for each one of those seven questions. This in turn means that the platform applications server will need to interact with each question’s underlying asset in the core. 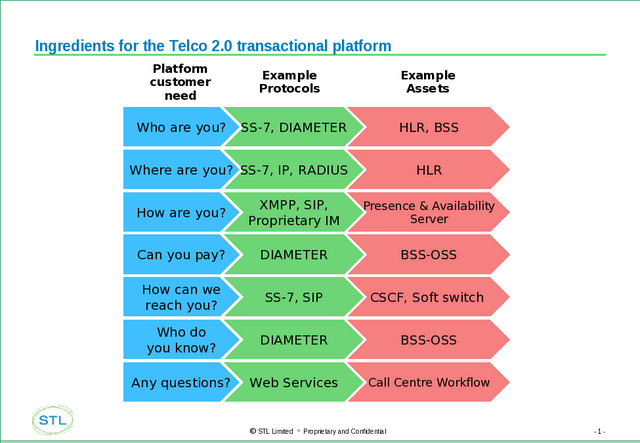 The wholesale pricing of the platform

How might these transactions with the telco platform be priced on average? At the upper end we can say, very roughly, that pricing will be somewhere below the cost of Turkcell and Telefonica’s “Mobile Signatures product” equivalent to one SMS per transaction, i.e. somewhere between €0.075 and €0.32 depending on location and price plan.

At the lower end we have Amazon Web Services’ 10,000 queue messages for $0.10, which feels cheap given the uniqueness of the data assets going into the service. Turkcell’s pricing feels steep — the Amazon page for any given product is assembled from about thirty different Web service calls, for context, and this is only one of millions of sites using dozens of AJAX (i.e. API) functions. So it will have to be somewhere between the two poles; for a wild guess, say €0.01 per transaction with any service as a starting point. 100 function calls = €1.

We can always adjust the pricing, but the obvious conclusion is that we’re talking about making our money out of a huge volume of transactions. Indeed, we even have an idea of how many transactions a telco would need to capture to make it worthwhile, and the scope-and-scale of the SDP required to do it; this begins to sound like a plan. €1 per 100 lookups doesn’t sound like much, but let’s compare some other platform businesses. We think the opportunity for transactional value-added services may be as much as $100bn a year by 2017, or €65bn in real money; that would suggest a fearsome number of transactions, 6.5 trillion a year.

Comparing the telco platform to its transactional competitors

But there are in fact several incredibly huge platforms that are, in the aggregate, approaching this even now. VisaNet, the information system behind Visa, processed 6,803 transactions a second on the peak day in 2006; which means they have to scale their systems for over 210 billion transactions a year. Their smaller rival, MasterCard, is about a third as big; so in total, taking into account another year’s growth and minor players, we’re looking at about 300 billion credit-card authorisations a year. NASDAQ’s systems are designed for 3 kilotransactions/second; HSBC’s internal IT system for 1.16. EUREX receives between 60 to 80 kilotransactions/second from the OPRA pricing feed alone.

One billable event to a partner can be many transactions

We know, however, that there are about four billion telecoms access lines on Earth. The interactions in a telco platform will be much more like OSS-BSS or cell site hand-off events than telephone calls; there’s already a significant multiplier between calls and non-call events in our existing networks. It’s the nature of the platform that its various APIs are meant to be combined to create some kind of business process; a payment is made either before commencing the process or afterwards, but the service that is being paid for might include dozens to hundreds of network events.

For example, today’s chip and PIN terminals are “fundamentally insecure”:http://www.telegraph.co.uk/news/main.jhtml?xml=/news/2008/02/27/npin127.xml. A future point-of-sale platform might use your mobile as a more secure terminal (since you trust your own equipment more than some tampered-with in-store hardware). A single payment could involve a dozen transactions between the merchant, bank and a telco that enables various supporting identity and credit functions.

The technology already exists to do it

In fact, we’re the only industry that could possibly process these numbers of transactions. If there are a hundred billable events a year per line on average, we’re already at 400 billion events; two VisaNets. But quite a lot of activity inside a telco core network isn’t billable, especially in mobile networks; the signalling channel is always busy with OSS, HLR, network management, logging, device management and many other kinds of traffic.

Consider the capabilities of typical telco equipment; this Sun Microsystems study (pdf), for example, which demonstrates 5,500 transactions a second on an HLR running on a single Netra UltraSPARC bladeserver. Two telco HLRs are the equivalent in transactions per second to more than twice VisaNet’s throughput. The OpenSS7 Project, being open-source, is much more open that most telco vendors about actual numbers; their HLR application is scaled for 4,000 transactions a second and 15 million subscribers on a 3GHz, 2GB RAM PC-based Linux box.

A platform tied to enabling all forms of economic activity

Further, the price these figures is based on is a very rough concept; the call-centre element (“any questions?”), for example, is likely to be worth much more and the presence-and-availability (“how?”) perhaps less. We’ve often thought at Telco 2.0 that platform-like services from telcos — such as location — tend to be overpriced by a factor of 3 (or more); basing this on the Mobile Signature pricing would give a figure of 2 eurocents per request, which brings us down to 3.25 trillion transactions, or 9 credit-card networks’ worth of activity. That would be one transaction for every 20 US dollars of global economic activity, 103 kilotransactions/second.

The term “convergence” has been thrown about for years to describe a frequently fictitious vision of one universal device that attaches to a universal network. What’s really happening is that the telecoms, media, banking and IT industries are fighting over a complete transactional value chain from advertising to order processing to delivery to support. Being a “dumb pipe” could be a very comfortable position if as a result you can carve out a defensible position in the broader digital economy.

It will be a long time before we get to these kinds of transaction numbers, though. What will the margins on all this activity be like? Based on these numbers, we can start to find out — watch this space.