Oi is a Brasilian GSM operator with over 1m customers using their Paggo service, which is a direct competitor to credit card networks such as Visa & Mastercard. It is the perfect example of an operator moving into an adjacent field, building a complete vertically integrated solution, leveraging the advantages of mobile and targeting a specialist niche in their home consumer market.

Paggo is a relatively simple SMS based payment service supported by a OTA downloadable SIM application. 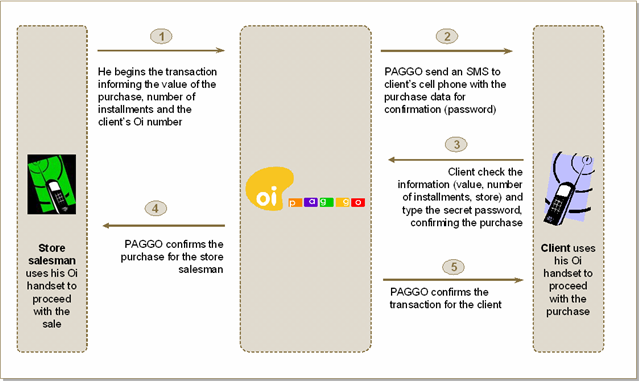 The benefits of Paggo for merchants are:

– it doesn’t require a specialised credit card terminal. The retailer doesn’t buy a specialised POS terminal just an Oi SIM and mobile service;
– It also has a Web-based interface for not only transactions, but general account management;
– it has the lowest commission rate on the market and undercuts traditional cards such as VISA/MasterCard/American Express. The merchant rates are approximately 2-2.5%%; and
– It is totally mobile and therefore can be used by merchants who don’t have a retail presence, such as taxis and street vendors.

The benefits of Paggo for the client are:

– It is really simple to use – just reply to a text message with your password;
– It is relatively safe even if you lose your handset;
– It doesn’t require you to be physically at a point of sale;
– It doesn’t charge for text messages and the billing is separate from the mobile card billing. It is available for both pre and post paid clients; and
– the charges appear comparable to a typical credit card company and structured in a similar way with monthly fees, interest and late payment fines.

The advantages for Oi are:

– it generates a new revenue stream from low use clients;
– it also allows Oi to sell mobile services into heavier users in the SME market who are the actual merchants;
– it is an exclusive to Oi and therefore clearly differentiates Oi in the marketplace and has enables Oi to gain market share in the launched cities; and
– because of the differentiation it allows Oi to operate on a non-subsidy basis in the pre-paid market.

The card is targeted at the poor & unbanked who have struggled in the past to get credit – and in Brasil this is a huge market. The credit market is booming now Brasil enjoys low inflation and rapid GDP growth.

Brasil is the fifth most populous country in the world, with 187m people and per capita income of US$12,000. However, the income distribution is heavily skewed with 42% of total income held by 10% of households. It is this long tail of income distribution which creates the huge potential market.

Mobile phones are incredibly popular across the population and Brasil has mobile penetration of 62% with 121m users. The market leaders are international players such as:

“Oi” translates into “Hi” from Portuguese and is a very powerful customer friendly brand name for a communication company. It is this branding which differentiated Oi from its launch as a 3rd player. Oi was the first pure GSM operator at launch in 2002 and the parent company owned the fixed line operations in the region. The Oi region covers a vast area from Rio De Janeiro to the Amazon and has a population of 102m and includes the poorest Brasilian states.

Paggo is only launched in three states: Rio de Janeiro, Bahia and Minas Gerais and the take-up and user acceptance is a phenomenon. It clearly offers great potential and should allow Oi to gain share, especially in currently under-penetrated markets.

It is heavily promoted on television with adverts featuring the star Brasilian footballer, Ronaldinho showing the advantages for the merchant of not requiring signatures. 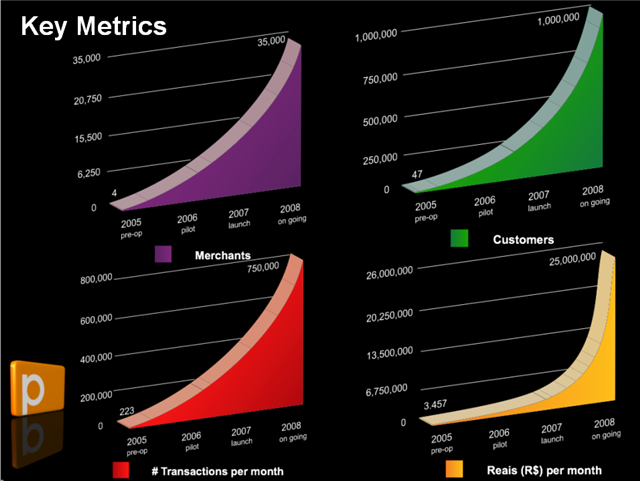 Paggo was a privately held start-up which was launched on Oi network; it was recently bought for R$75m (US$46m) in December 2007. Most of the launch investment was a substantial IT and support infrastructure behind the service.
Oi has plans to license Paggo to operators outside of Brasil.

The success of this and similar payment services (e.g. Vodacom) shows that telcos need not restrict themselves to hauling bits around. What works are services that align with the things that ‘over the top’ media can’t do well: trust, handling money, building up a large user base, on-the-ground distribution, and customer support. Where they fail is when creating media content and online services that don’t exploit these capabilities.

Unlike Web apps, the service to the user appears almost laughably simple – the complexity is all in the back end and software integration, e.g. with merchant accounting, fraud management, tax collection, etc. Telcos are in the business of ‘postage and packaging’, and this is very much a packaging effort. Note the ‘upstream party pays’ model for the SMS sent both to and from the mobile handset, meaning the ‘postage’ charges are all included.

Notably this service grows the new market by serving the under-served low-end customer, not vying for the business of existing high-margin wealthy ones. This could be a critical lesson for telcos looking to expand other parts of their business. For example, you could launch a multi-modal VoIP service, which would also allow content sharing during calls, and target it at children, who would have a higher tolerance for lower voice quality, but also would place a premium on the new features.

Paggo has been built as an independent product, and then in-sourced. There are other such precedents, such as SK Telecom with Cyworld. These are one-sided business models, where you buy in a product and sell it to the user. By prising open the platform a little more, you can move towards a more two-sided model, which joins a larger number of entrepreneurs and innovators with the telco customer base. For example, Paggo customer service can’t query if a message has been delivered, or if there’s a network problem, without the telco’s assistance.