OFCOM’s annual Communications Market Review is out and it is of course packed with chewy data. Taking a first look into the 379 page behemoth, we’ve noticed a couple of interesting points about the industry and the customers of the future, the people who took centre stage in our Serving the Digital Generation strategy report.

Before we get to that, though, here’s a very important chart indeed. 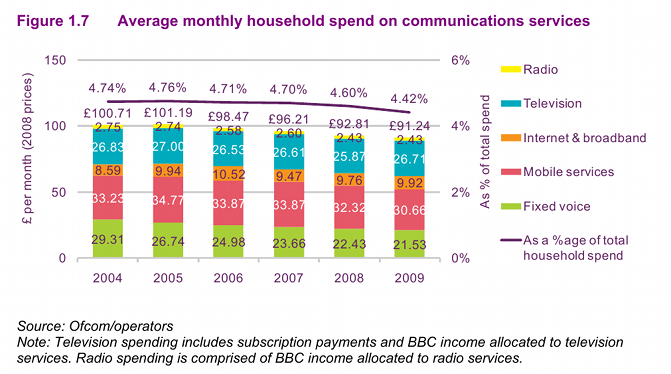 First point – spending on communications is falling as a share of household income, dropping from a peak in 2005. Further, as you may have noticed if you aren’t leading an extraordinarily sheltered life, this isn’t because household incomes are surging upwards faster than we can devise products to absorb them. Monthly household ARPU in cash terms has fallen 10% since 2005.

The breakdown of this fall is interesting in itself. Spending on fixed Internet service hasn’t changed significantly. Spending on TV has fallen very slightly. Rather more than half of the change has come from the decline of fixed voice, and the rest is accounted for by falling prices in mobile. These trends are not the impact of the Great Recession, either – the second fastest drop in fixed voice was 2005-2006. 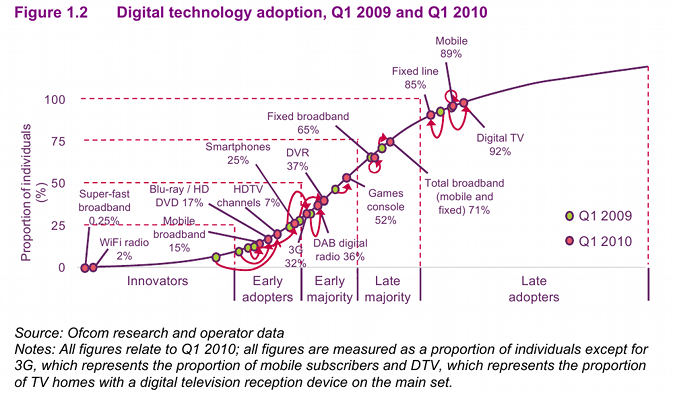 This classical Bass diffusion model suggests that, if you thought the last couple of years had seen dramatic growth in mobile data traffic and in smartphones, you ain’t seen nothing yet. OFCOM reckons both mobile broadband and smartphones were about to transition from the “early adopters” to the majority adoption phase – aka the rapid growth inflection in the curve – as of Q1 2010. The Bass model typically predicts that the Early and Late Majority groups both account for 34% of total adoption, so 78% of total adopters are excepted to arrive in a period of time only half as long again as it took the 15% or so of early adopters to rock up. Watch out!

The economic crisis is unlikely to hold up this development very much. Consider this chart… 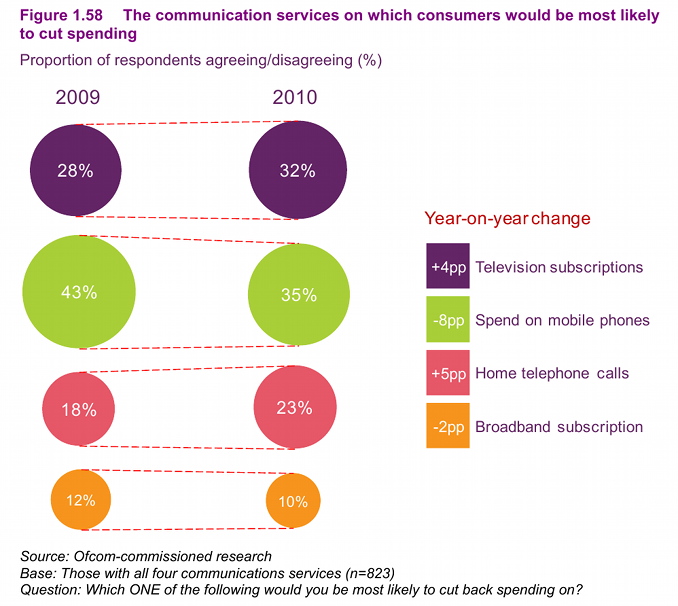 As the recession bit, the public valued mobility more. On the other hand, they targeted pay-TV subscriptions and good old steam telephony for their very own emergency cuts package. This, by the way, fits with what we heard from Eircom at Telecom Finance in February.

But what will the customer of the future pipe over our networks? Everyone knows that – an unstoppable tsunami of pirate video, delivered in an unholy alliance with Google and Amazon. Right? 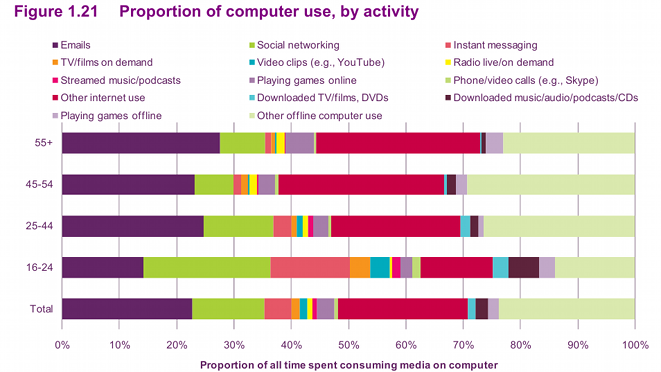 As this chart shows, the 16-24 year olds may watch more video on their computers than other groups, but it remains a relatively small percentage of user time. In fact, totting up e-mail, social networking, and “other Internet use”, which seems to include the WWW, usenet, etc, you can’t avoid the conclusion that the PC is still a fundamentally textual medium.
In fact, the 16-24 and 25-44 groups consume the least video, as this table shows. 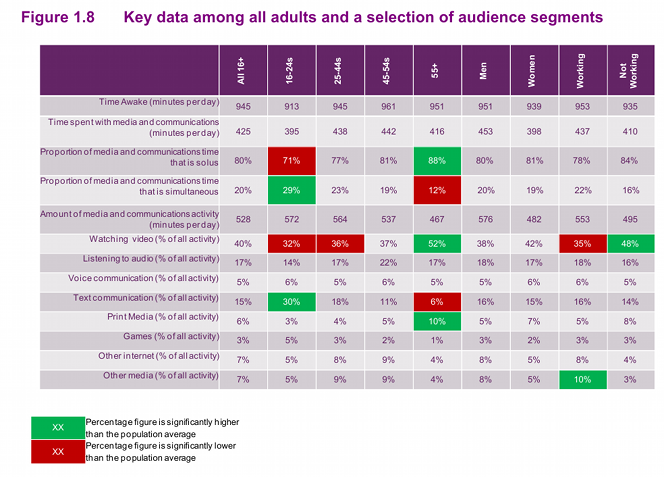 Actually, being young reduces your video consumption below the national average more than being at work does – “working” as a group averages 35% of their total media time watching video, 16-24s 32%, the lowest single group.

Again, the customer of the future is heavily textual – the 16-24s spend much more time on “text communication”.

Interestingly, though, this doesn’t represent a cannibalisation of voice. On average, 5% of all adults’ media time consists of telephony, and the intergroup variance is next to nothing. 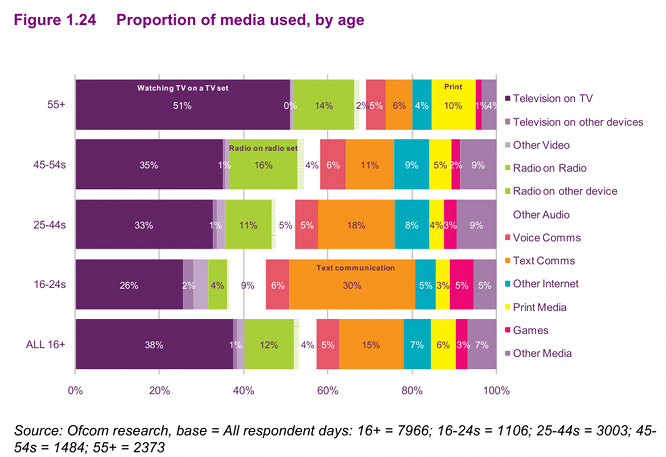 This chart offers a nicer visualisation of those data – note, again, that there is hardly any distinction between groups with regard to voice, which can be read both as an index of its enduring value and also as a consequence of its commodity status. Further, the bars make it very clear that the biggest difference between the customer of the future and the customer of the past is that they don’t watch TV, and even counting in “other video”, they still don’t watch enough YouTube or iPlayer to make up the difference. This importance/attention matrix makes the point clearly. Again, note the enduring importance of voice. 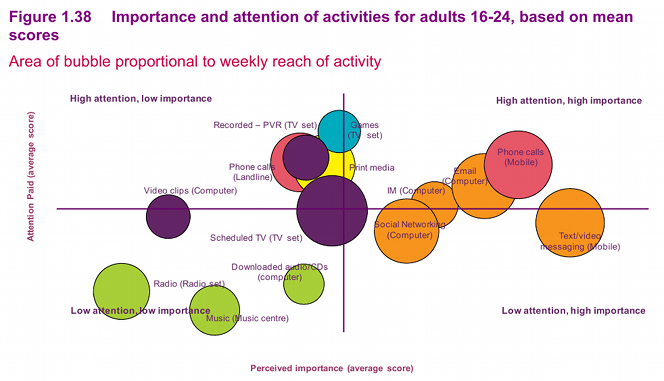 It’s been a cliché since the 1960s that we live in a TV society – at the very least, the fact everyone thinks it’s hugely influential must have had important consequences for political and business strategies. To a significant and growing extent, we won’t any more. In that light, it’s no surprise that advertising revenues are stagnant to falling – although it might be a surprise that well over half the OFCOM review is dedicated to TV.

On the other hand, the stereotype of the bandwidth hog we alluded to above is right about something. 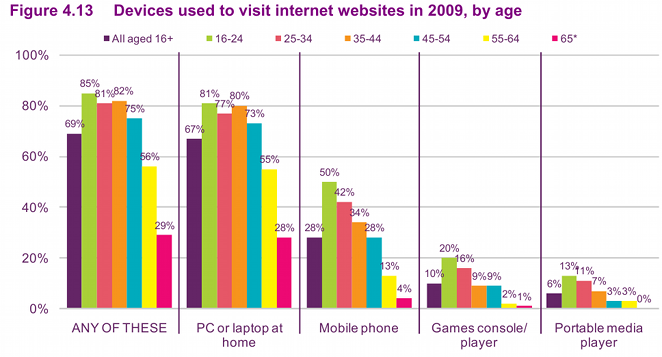 50% of the 16-24s are already mobile data users. The data-centric, smartphone environment is the new normal. We will need the extra capacity after all – even if it’s more likely to be signalling capacity, to handle all those instant messaging sessions and the like, rather than raw bandwidth for video-hauling. And by the way, the typical Customer of the Future is a girl – OFCOM’s numbers for the “active online universe” show that the 16-24 and 25-44 cohorts are slightly, but significantly, more likely to be female.

You can read more of our most recent telco research here.