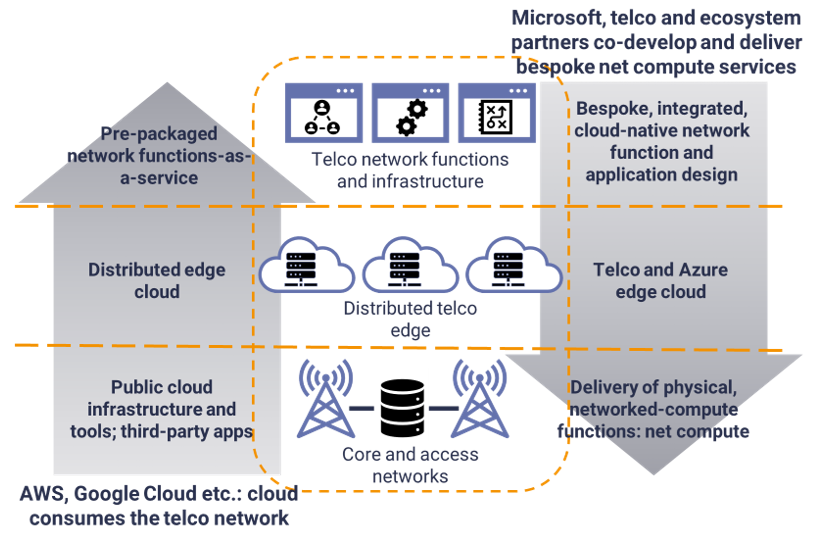 The above illustration shows somewhat the distinction between AWS’s and Google Cloud’s offer to telcos compared with Microsoft Azure’s. There are examples where telcos are relegated to a subordinate role in relation to Microsoft Azure, too: as a customer for NFaaS and as a mere platform and channel for Azure’s and its partners’ edge compute-enabled services.

However, we do believe there is a fundamental distinction between the way AWS and Google, on the one hand, and Microsoft Azure, on the other, view the relationship with telcos and the role of telco cloud and infrastructure. All three, to one extent or another, do see telcos as just another market segment to sell Software-as-a-Service (SaaS) and Infrastructure-as-a-Service (IaaS) into: in the form of public cloud-hosted VNFs and CNFs. And all three are rolling out their cloud platforms into the telco and enterprise edge. In AWS’s case, this takes the form of its Wavelength Zones and Outposts respectively. By contrast, Google’s is more software-centric, involving a ‘Global Mobile Edge Cloud’ supported by a Kubernetes-based, container-orchestration platform (Anthos for Telecom). This is intended to enable flexible delivery of network and application functionality across a hybrid of telco and public clouds.

This is not how Microsoft is at least positioning its newly acquired Affirmed Networks and Metaswitch CNF assets. They are presented as not simply a network-function solution for telcos to access either by integrating them into their network and telco cloud, or an as-a-service basis – although they are that too. Rather, they are a means to fit out the telco network to meet the challenges of operating (primarily) 5G services more effectively, both in terms of handling the sheer volume and variety of data that will flood the network, but also by co-developing new use cases – in partnership with Microsoft itself and third-party application developers – that fully customise and optimise the 5G network around the needs of the applications and the compute involved. So this is network enablement, rather than just absorption of the network into the hyperscale cloud infrastructure and business model.

See our previous research on hyperscalers and telco edge