This Renesys post on the growth of the Internet in Latin America is fascinating. This chart explains why. 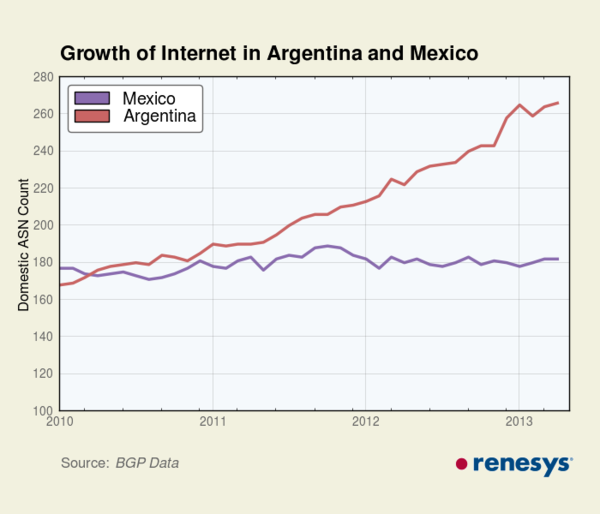 What’s being plotted here is the count of AS (Autonomous System) numbers over time. ASNs identify networks that control their own routing policy and IP address block. The voluntary interconnection of autonomous systems through BGP routing, which is based on AS numbers, makes up the fundamental structure of the Internet.

In this sense, counting ASNs is a better metric than counting subscribers, domain names, Web sites, or IP addresses, because it is a measurement of participation in the Internet, not just consumption of cat videos and Google adverts. The creation of new ASNs is evidence that new businesses, organisations, content providers, hosting and cloud computing providers, and ISPs are emerging. It is evidence that technical competence is diffusing through society.

You can clearly see that Argentina is racing ahead of Mexico on this score – if you read the post, you’ll also see that Brazil is doing even better. Every year, Brazil adds as many ASNs as there are in the whole of Mexico. This is a reflection of vastly different government policy and market structure.

Mexico has only now passed a serious measure to regulate the telecoms market. To what extent it will be implemented remains to be seen, but at least it’s a start. Even now, Mexican telecommunications is dominated by a giant private monopoly, Telmex. The combination of having acquired Telmex with the easy money of hyperinflation, and being able to extract monopoly prices, made its owner Carlos Slim the richest man in the world. However, as we see, it has also made Mexicans second-class citizens of the Internet. Certainly, Telmex provides Internet service…of a sort, at a price, and very much as a packaged and branded product into which the user has minimal insight.

There’s a superb presentation here from LACNIC-19 by Wardner Maia, of the Brazilian ISPs’ association, that sheds a lot of light on what’s wrong here.

One of the biggest problems the Brazilians identified was that interconnection within Brazil was so poor that much traffic within Brazil (and even more so within Latin America generally) transits via Terremark, now Verizon’s, NAP of the Americas in Miami. This is obviously desperately suboptimal in terms of performance and of resilience. Reliance on infrastructure controlled by the US is also a deeply sensitive political issue in the whole of Latin America. (You’ll notice that Wardner Maia’s presentation frames the issue as being about a more democratic Internet.)

Not only does traffic go where the interconnection is, so does content and so do services, and therefore, so do jobs and so does political power. From a Brazilian point of view, the danger was that the Internet would turn out to be a machine funnelling money from Brazilians to North American companies and pushing North American ideas back down the tube, while incidentally permitting the US to spy on their traffic whenever it saw fit to do so.

So, what to do about it?

Well, Brazil also privatised its telecoms industry, but not only did it hold on to key infrastructure in Telebras, it also started a hugely impressive program to create public Internet exchange points (IXen) in cities all over Brazil. We mean all over. These sites permit local networks to interconnect and peer directly, saving on the cost of national and international transit, reducing latency, and providing for a denser, richer, more resilient web of interconnections.

And the results have been spectacular. Over 700 new ISPs are created every year, 78% of which are registered as small or medium businesses. Out of 5,565 municipalities in Brazil, only 22 don’t yet have a local ISP. When you imagine some of the places involved, this is a truly awe-inspiring statistic. These companies are reaching into the favelas and into the outback, but they are also competing with the majors as specialised business ISPs in the city centres.

Obviously, you have every right to be sceptical about how many of those ISPs will make it. But this is beside the point. Even the ones that fail are contributing to the diffusion of real technical competence into the general public. In future, businesses and civil society in these places will have access to people who can run their own networks, analyze their own data, and develop their own software.

The two biggest network technologies they use are WLAN, and fibre to the premises. It is telling that these are the technologies chosen. The first relies on an open standard and self-organising, cooperating mechanisms. The second relies on access to the existing aerial plant. On the one hand, open standards and open competition; on the other, publicly-owned hard infrastructure.

And then the Argentineans essentially copied the policy, hence the chart. Mexico, meanwhile, doesn’t yet have an IX, not even one, although there is now an effort on to get started. And it’s not enough to snarl at the North Americans, either – nobody loathed Uncle Sam quite like Hugo Chavez, but Venezuela’s position in all this is far from impressive.

It’s not as bad as Uruguay, which has a monopoly state operator, but it pales in comparison with Brazil, Argentina, or Costa Rica.

It’s a race between Turkey and Iran, and Iran is coming up on the rails. Iranian ASN growth, national interconnection, and IPv6 adoption are all surging ahead. There is, of course, one very important difference – Turkish networks are globally interconnected, even if the prime minister thinks Twitter is the “greatest scourge in the world”, but Iranian ones are behind a wall.

This demonstrates something interesting. We’ve said before that the Great Firewall of China is as much an exercise in protectionism as it is one in censorship. There is a whole string of huge Chinese Web 2.0 companies that basically exist because their competitors are firewalled out. Obviously, something like this is at work in Iran.

In fact, the Iranian transit monopoly may also be functioning as a Chinese-style protectionist tariff-barrier, preventing international competition for their own content, services, software, and hosting providers. And DCI’s political role is interesting, because Iran also sells open international transit abroad, especially where it suits Iranian foreign policy goals. As long ago as 2006, the Iranian embassy in Kabul’s cultural centre operated a cybercafe with what was said to be the fastest, and entirely uncensored, link in Afghanistan. Afghan, Iraqi, or Omani customers get the Internet, which projects Iranian influence and trade. Iranians get the censored version. (Their router configs must be…interesting.)

So, to sum up, there is more to the Internet than Google, the Internet is mostly worth having when it is a participatory medium founded on the interconnection of autonomous networks, this is embodied in the IX and datacentre economy, and the idea of giving the incumbent operator what they want in the hope they’ll reinvest in infrastructure is fundamentally flawed.

And nothing, nothing, is more important than peering, interconnection, data centres, and skills.