What is mobile edge computing?

Multi-access Edge Computing (MEC) – formerly known as mobile edge computing – is a type of edge computing that extends the capabilities of cloud computing by bringing it to the edge of the network. MEC was borne out of the ETSI (European Telecommunications Standards Institute) initiative that originally focused on placing edge nodes on the mobile network, but it has now expanded to include the fixed (or eventually converged) network.

Whereas traditional cloud computing occurs on remote servers that are situated far from the user and device, MEC allows processes to take place in base stations, central offices, and other aggregation points on the network.

What are examples of multi-access edge computing (MEC) use cases?

There is no one “killer app” for multi-access edge computing; it is being discussed under a variety of use cases. MEC is a tool for improving the performance of existing applications, such as content delivery or caching, but it is also turning into a key enabler for new applications. MEC will drive new revenue-generating (5G) use cases and could potentially also improve efficiencies for telcos in delivering highly distributed high-throughput content use cases. Therefore, MEC can yield benefits for both customers and telcos.

Examples of multi-access edge computing use cases include:

Enterprise Mixed Reality (MR), Augmented Reality (AR) and Virtual Reality (VR) applications MEC in AR/VR can support remote workers conduct maintenance and repair tasks in the field. A MEC solution would provide an overlay of rich information related to a particular asset they are repairing on the field force worker’s display on a headset or mobile devices. Today, 3D models are too heavy to render on the end-devices and cannot be done in the cloud, as the latency is too high. MEC allows processing of data and potential rendering of 3D models off the device, which allows digital twin models to be augmented on the view of the worker, as well as enable a remote expert to annotate the image/video being streamed from the headset or mobile devices in real-time, as well.

Another enterprise MR application enabled by MEC is multi-user collaboration for architecture, engineering and construction teams. It allows real-time collaboration by rendering models that the team will be working on jointly in the edge cloud. This reduces latency, particularly as these 3D designs are often huge files. MEC deployment also allows easy sharing amongst other stakeholders, through a distributed network.

Cloud gaming and multiplayer gaming MEC would move the intensive compute/graphics processing from a dedicated gaming console, or a data centre as cloud gaming grows, to the edge of the network. Gamers would have access to the same quality of game from a thinner client, anywhere within the network’s coverage. For gaming studios and developers, since MEC provides extreme low latency, cloud gaming becomes a viable way of giving a wider audience access to high-end gaming experiences and potentially a new income stream when combined with a new subscription model.

Real-time drone detection There is increasing need for solutions that detect when a drone has entered a secure, geo-fenced zone and to trigger necessary alarms/actions as defined by the security teams that manage the site. Airports, as seen by the Gatwick Airport drone incident in the UK in 2018, prisons and hospitals could be primary adopters of this technology, because they need to be able to respond to threats immediately, which is made possible through MEC. Using MEC would reduce latency for identifying a foreign drone and mapping its path determine whether it’s approaching an exclusion zone. MEC keeps data from the drone closer to its source, reducing the time taken to react when there is a breach or a security threat.

Video analytics There is an increasing use of video surveillance in cities/enterprises, with data volumes growing, due to both the number of cameras and the quality of footage increasing. MEC enables local break out of traffic and analysis at the network edge, as opposed to routing the video traffic to central control for analysis. This allows the aggregation of video streams from different types of cameras and can enable other video analytics applications including real-time facial recognition, asset monitoring and footfall analysis. MEC reduces the cost, volume and time it takes to transport raw footage to the cloud/central server and allow for real-time triggers based on the analysis. 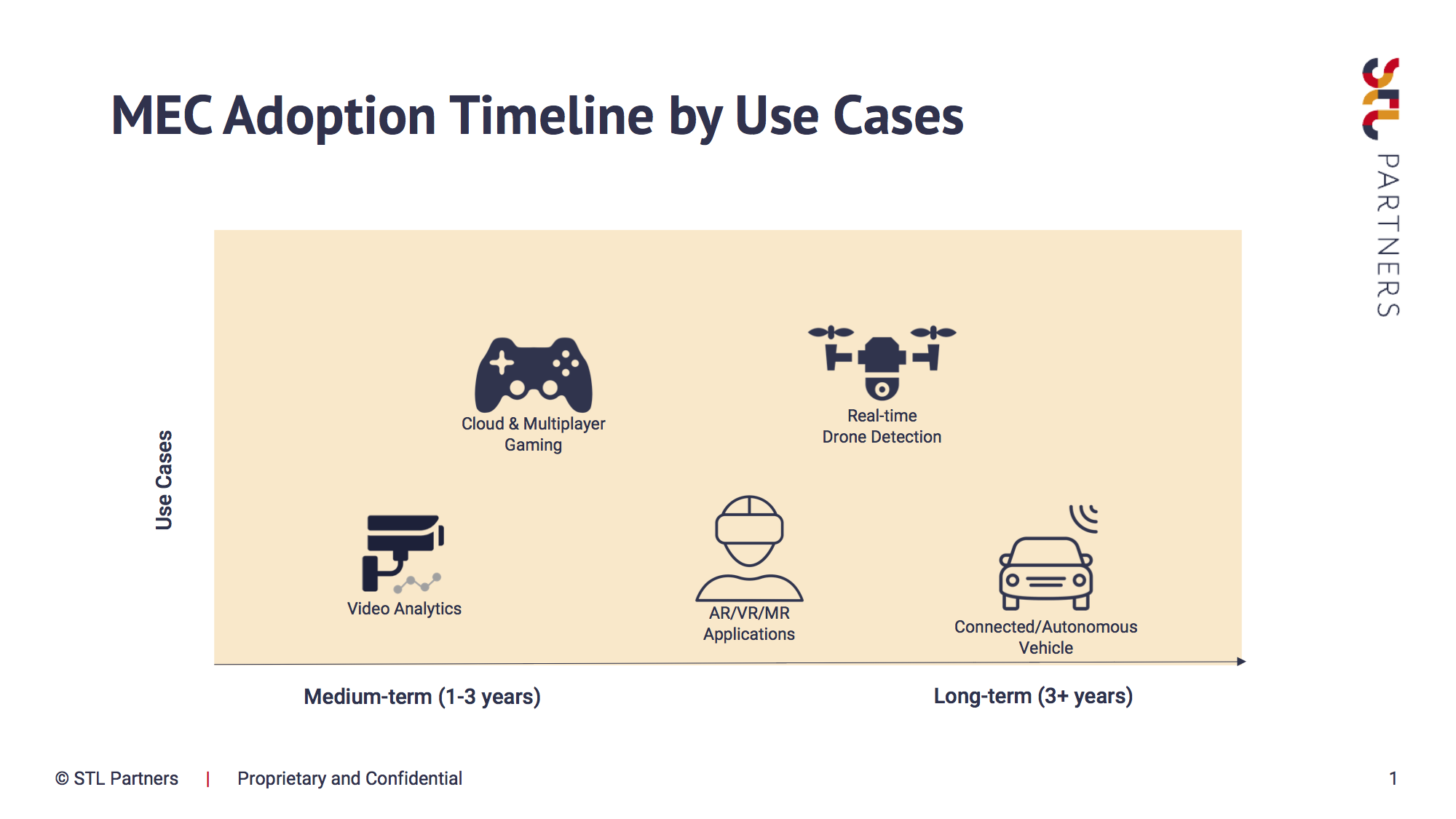 Telcos are keen to use MEC to build new revenues, particularly as we have seen core connectivity ARPUs decline in many advanced markets and both voice and data becoming commodities. MEC opens opportunities across different business models which we outline below. However, taking a one-size-fits-all approach may not work in MEC, as each application domain has different needs that may or may not be best served by the operator. We highlight some of these in recent webinar Edge computing from the front line: developer case studies, which is available to view on our edge hub.

Although the MEC market is still at an early stage, telcos should not wait for it to mature before trying to tap into emerging commercial opportunities. With strong competition looming, they should explore what could be viable business models to support many potential MEC use cases. 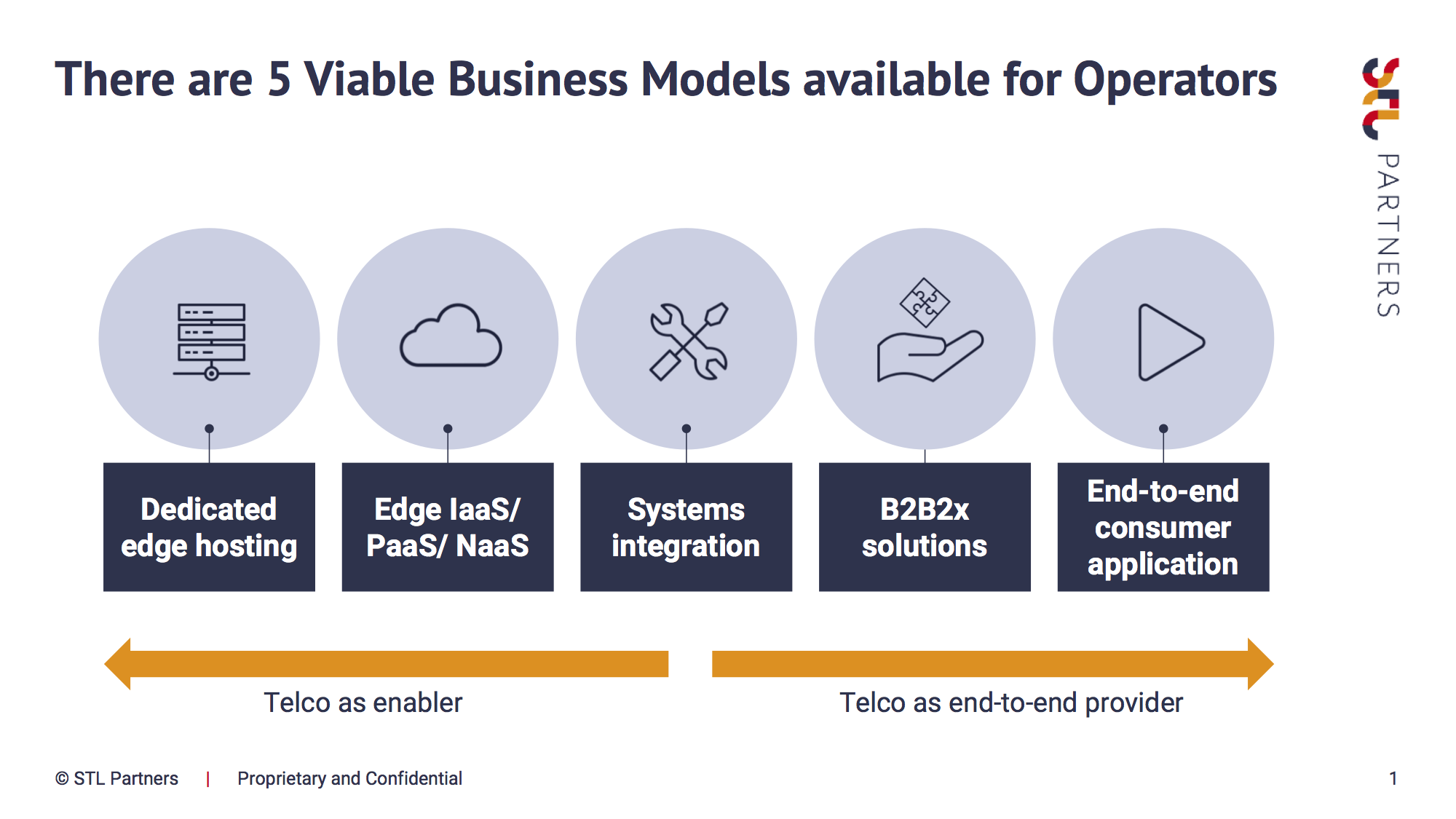 With these business models, a telco can choose from a menu of options which fit its risk profile and existing capabilities. Telcos do have an opportunity as a first-mover, considering the emerging competition in the edge computing space, but it’s crucial for individual telcos to begin identifying use cases and providing platforms for developers to leverage MEC infrastructure.

Although there are multiple business models that Telcos can apply to capture the emerging commercial opportunities in MEC, there are some key challenges that Telcos need to address first:

Cloud providers such as Amazon Web Services or Microsoft Azure are also moving to utilise edge and to extend their centralised cloud services through offerings such as Greengrass and Outposts (from AWS) and Azure Stack and IoT Hub. Such providers are facilitated by several trends that are causing enterprises to use local and distributed compute and storage, such as:

MEC is considered to be more of a medium-term opportunity (2-3 years) for telcos, as it will take time for application developers to take advantage of the sufficient infrastructure which is yet to be deployed – the world map below shows that majority of telcos have only just started to roll out MEC sites. 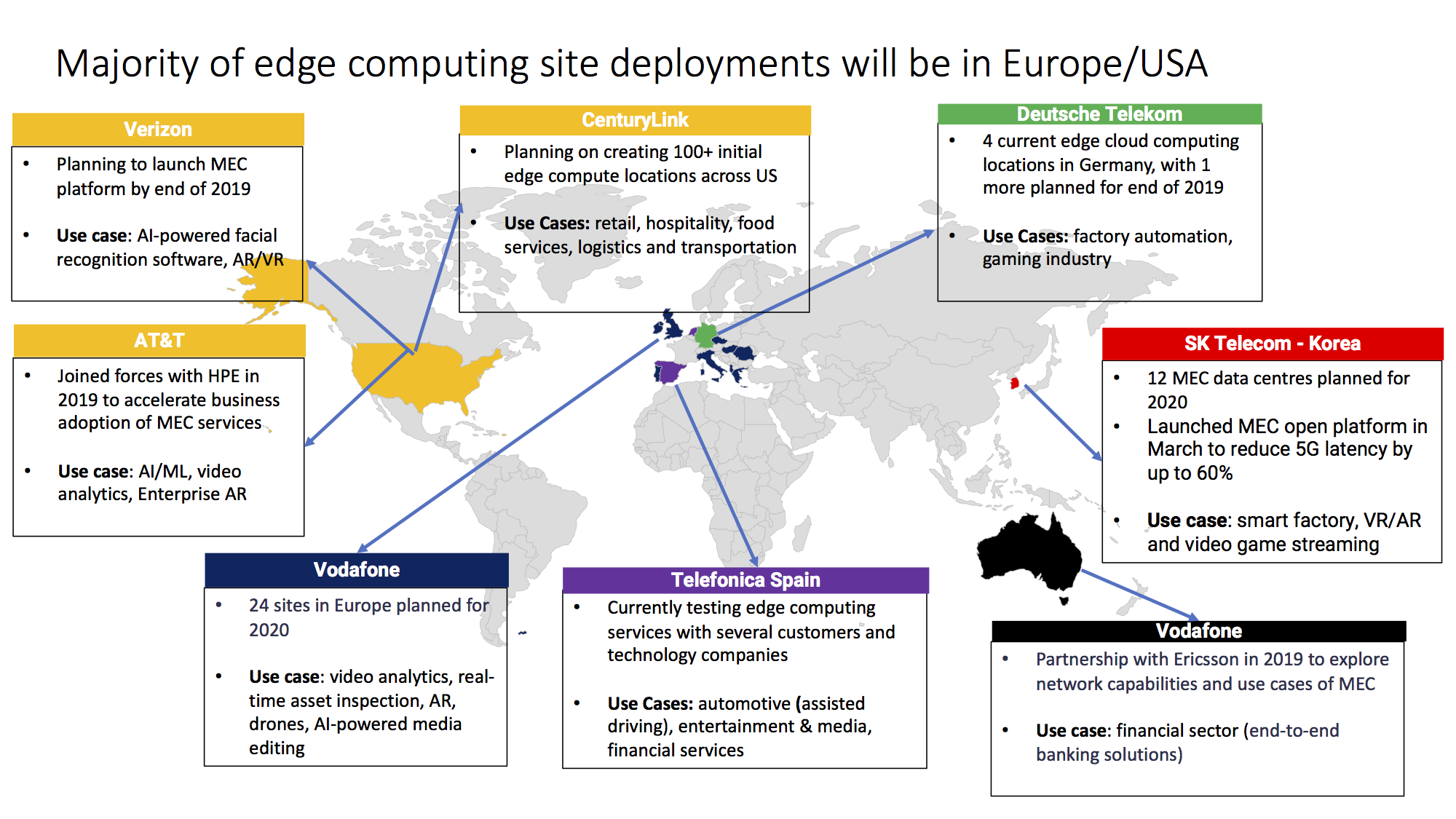 In terms of the actual market size for MEC, although there are some discrepancies (upper/lower bounds) on projections across multiple sources, the general trend is that the global MEC market will experience significant growth in the next few years. This growth will be primarily driven by telcos rolling out MEC infrastructure starting from 2020, as well as the deployment of MEC applications across various industries.

Analysts disagree on the forecasted size of the MEC market

Next steps for telcos – The future of mobile edge computing

In order to capture future growth opportunities in MEC, telcos must build propositions in more than one area, where synergy will help drive an incremental benefit. This could be done through working with real customers across edge domains and identifying common requirements across use case domains, and also collaborating with customers to focus on defining business models.

Moreover, there are some key questions that telcos should ask themselves to enhance the benefits of MEC:

It’s likely that many telcos will take a modular approach in the short term, adopting a complementary business model for an initial deployment, expanding into further areas as demand becomes clearer and technology starts to prove its efficacy.