Since we published our Sprint-Softbank: how it will disrupt the US market analyst’s note, a fair few things have changed. Everything has been slower and more complicated than it seemed. The minority investors in Clearwire have been troublesome, something we pointed out as an issue.

But the real surprise was the intervention of satellite TV operator, DISH Network, which as regular readers of our news review will know, has tried to muscle-in on the deal with a rival bid for the whole thing.

And the soap opera continues, with the latest gripping instalment. Softbank has issued an unusually combative response, in a presentation from CEO Masayoshi Son which describes DISH’s proposal as “inferior”, “incomplete”, “inefficient”, and

“illusory”, and asserts that Softbank’s is “superior” no fewer than 7 times in 46 slides not counting front-matter. Clearly someone’s read, marked, learned, and inwardly digested the bit of their Big Book of Behavioural Marketing where it says “If you do not repeat, you won’t compete.”

Son’s presentation also goes after Charlie Ergen, DISH CEO, personally, endeavouring to scare the shareholders with the prospect of a company substantially controlled by Ergen personally (he would speak for 85% of the combined company, although he would only own 36%). Here’s the action replay:

“I just deliver the results, instead of big-mouthing about the future,” Son said. “Do you want to attach a satellite dish to your smartphone? It’s going to become much heavier. I don’t see any real meaningful value that he can offer to the smartphone customers.”….”He himself admits he’s an amateur to our mobile industry,” Son said at the Tokyo event. “He does not have any history in our industry. So he’s a newcomer — totally, totally a newcomer.”

There’s certainly a bit of needle here – Son is punching upwards at Ergen, No.100 in the Fortune 500 with $10.6bn as against Son’s No.128 with $8.6bn. Like Iron Mike in the streets of Brooklyn. Or something. Certainly, this is shaping up to be the most personal and embittered merger in telecoms since Vodafone-Mannesmann or perhaps the feud between the Ambali brothers at Reliance.

The ego wars besides, Softbank has some valid points.

Operationally, DISH’s strategic concept can be described as “wireless quad-play”. DISH’s satellite TV network mostly serves rural or exurban customers who can’t get decent broadband or cable thanks to long DSL copper runs and sparsity. DISH proposes to add a fixed-wireless broadband product – essentially Clearwire – to their TV product and then round it off with a mobile product, essentially Sprint mainline. And Charlie Ergen is talking about selling advertising across all three channels.
They have their reasons – subscriber growth in their satellite business has slowed to a crawl, and therefore they’re looking for an upsell that would add some juice to their ARPU and margins. Son’s presentation put it this way:

In the original, this appears next to Softbank’s global subscriber numbers, which isn’t really a fair comparison – why would Japanese UMTS subscriber growth tell you anything about US satellite TV? But who said this was a fair fight?

On paper, or rather slides, it makes a sort of sense – the idea of pushing TV alongside broadband is fairly standard. DISH has looked at the idea of broadcast-broadband integration before, cooperating with Verizon Wireless to develop a CPE device with a high-gain external antenna (the so-called “cantenna”) that would get its TV from satellite broadcast and everything else from VZW’s 700MHz LTE network, benefiting from the low frequency and the less demanding form-factor.

Tale of the Tape…

But this is slideware. Vendors love to tell you that LTE is the new DSL, but Sprint’s spectrum position is massively skewed towards the higher frequencies. They have some 800MHz, but this is mostly earmarked for voice, and they recently had to swap some of it for 1900MHz space. They have quite a bit of 1900, but the mainline network and the growing LTE deployment lives in there, and 1900 is high for rural anyway. And of course there’s the massive 2.5GHz Clearwire block. 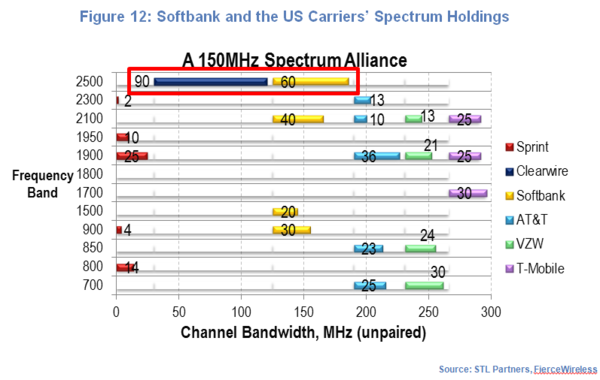 Here’s a Sprint graphic explaining their future plans for the spectrum:

DISH controls 45MHz of spectrum, but it’s in a satellite service band at 2GHz, which makes it precisely non-standard for anything mobile. Note that the DISH contribution fits in where they don’t really need it – up between the 1900 and the 2500, well in the “urban high-capacity” bracket, while the DISH-Sprint concept could really do with more 800MHz spectrum. Of course, you can always add more cells, but more cells mean more costs, and they also require getting permission for each one.

And although there is no such thing as a good LTE spectrum option – they all seem dreadful in subtly different ways – 2.5GHz looks more promising than 2GHz, simply because other people are using it. In our previous note, we pointed out that Sprint has suffered hugely from getting diverted off the LTE development path, and that Softbank’s spectacular performance in Japan after 2008 was very much because they were the only pure UMTS operator in town (rather than FOMA), therefore benefiting from the iPhone 3G and cheaper equipment. Sprint shareholders and managers would be very unwise to get involved in another freak deployment, especially given the epic pain it’s been closing down the old iDEN network.

Further, the whole LightSquared saga ought to be an awful warning for anyone who has the idea of trying to repurpose US satellite spectrum for cellular use.

Barclaycard? This man’s in no state to go shopping!

Sprint has always had partner-network relationships, and they were a source of endless and expensive trouble during the Nextel merger. The consolidation of Clearwire is going the same way – in the courts again this week. The main reason for putting up with all this trouble was to raise capital outside Sprint itself. So, does it really make sense to do a deal that involves borrowing quite so much money? DISH, a much smaller company, plans to finance the transaction almost entirely by leveraging up. Specifically, they’re borrowing most of the money from Barclays’ Bank.

Another of Softbank’s objections is speed. Changing course now will mean more delay. Obviously this is self-serving, but there’s a point here.

In our note, we pointed out that one of the biggest risks to Sprint-Softbank was that T-Mobile USA might get its act together and launch the disruption first, before the deal closed. And, well, that’s happened. T-Mobile has tied up the funding from Deutsche Telekom, turned up LTE service, closed the acquisition of MetroPCS, secured a supply of iPhones, and initiated a new strategy based on no-lock-in, low-cost plans where you either bring your own phone, or else pay for a new one in instalments.

Our readers will no doubt recognise this as Softbank’s old strategy. It’s currently the cheapest way to acquire an iPhone 5 without breaking the law, so it should be no surprise that T-Mo has had customers queuing out of the doors and has registered net subscriber growth for the first time in years during Q1.

Meanwhile, although Sprint mainline added 351,000 net subscribers in Q1, and upped its service revenue to boot, it wasn’t anywhere near enough to compensate for the loss of Nextel iDEN subscribers – another 771,000 left in the quarter. The iDEN-ers are leaving at rather more than twice the rate mainline is picking up subscribers. Perhaps killing off the first voice application developer community ever wasn’t such a good idea.

The Softbank strategy for Sprint is simply to manage Sprint better as a pureplay mobile operator, making full use of the spectrum and the procurement efficiencies it brings with it and setting a disruptive price-point to reset the market. This basically implements the Happy Pipe option. The problem, though, is that T-Mobile USA is already in the field with this strategy.

DISH’s proposal is far more ambitious, combining a challenge to the incumbents’ carrier business with (yet another) attempt at the telecoms-as-media strategy. But it depends on pushing the limits of current LTE radio technology and working around a structurally deeply problematic spectrum position. It probably won’t work.

Whatever happens, either Softbank-Sprint or T-Mobile or both are determined to smash the US price premium. From our Softbank-Sprint note, here’s a (typically aggressive) Softbank chart that illustrates the point. 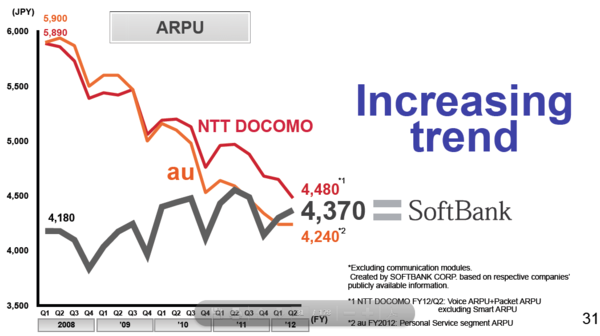 Softbank sees this as illustrating an “increasing trend” in their ARPU. But the decrease in everyone else’s is far more dramatic. The worry for the other US operators is that Son’s strategy to win this fight may drag his opponents’ ARPUs down to SoftBank’s level.