One of the major successes of the mobile industry in recent years has been the growth of m-banking in the developing world. Although a considerable number of well-funded, vendor- and operator-backed efforts to deploy m-payments systems in Europe have failed, m-banking succeeded in Africa and Asia – largely because it catered to needs that the rest of the financial system simply didn’t supply. Now, a major emerging market operator, Zain, has entered the game with a radically different business model.

Another driver of success was that the developers of M-PESA and other systems observed that the airtime credit transfer features built into their prepaid OSS solutions were being used by their subscribers as a crude money transfer system; rather than prescribing a solution, they built on user creativity. Telco 2.0 is interested in this not only because this form of development is profoundly Telco 2.0, but also because m-banking is the ultimate example of the opportunities that appear where there is a large and positive difference between the quantity of data transferred, and its social value.

By far the best-known systems are M-PESA, developed in-house by Safaricom in Kenya and now deployed in several other countries, and Smart Telecom in the Philippines. However, as you’d expect, the success of these has attracted imitators and competitors as well as emulators. If you’d asked most people in the industry which operator was likely to reach the market first with such a product, they would probably have said Celtel, the hugely respected emerging market GSM specialists founded by Mo Ibrahim. After all, by 2006 they’d already integrated their East African HLRs, ending roaming charges in the area and permitting cross-border credit transfer, a single currency of sorts.

Well, Celtel was sold to Kuwait’s MTC not long after that, changing its name to Zain. Mo Ibrahim took his money and began offering African presidents a bonus for retiring peacefully. Now, however, Zain has moved into the mobile money business. It is certain that this will be an important moment in its development; Zain’s sheer scale makes that certain. The initial deployment covers some 100 million subscribers. This also means that some markets now have competing mobile payments services – Tanzania, for example, has Zain’s ZAP and two competing M-PESA deployments. This is probably going to teach us a lot about this business in the next few months.

The killer application for mobile payments is cash. This is one of the reasons projects like Simpay failed; rather than extending the existing financial system they tried to leap directly to a cashless system. Network effects are vital to understanding this; if the money in the system can’t be converted into cash, the whole system is afflicted by a first-fax problem as no-one is likely to accept payment from it. It’s therefore crucial that it deals with cash.

Cash is also the form of payment that mobile banking systems compete with. This is another reason why the successes were in cash or pre-cash economies, rather than in Western Europe – most people where Simpay was trialled have access to modern banking and ATMs readily distribute cash for all and sundry. Handling cash is always expensive and risky, whereever in the world you are; it is frequently stolen or embezzled, it needs guarding. These problems are much aggravated if there is no effective policing. Hence, in large parts of the world, people are excluded from the ability to save (or to borrow), and are reliant on expensive and frequently risky informal transfer networks.

Mobile operators were able to step into the breach because the development of PAYG (Pay As You Go) service had created an alternative, lightweight financial infrastructure, consisting of real-time OSS solutions in the network and an extended user interface, made up of various tokens (vouchers, SMS transfers) and a network of micro-entrepreneurs who sell them. The business process here essentially provides a way of authenticating to the OSS that the user presenting a voucher code has indeed paid cash to acquire a given number of minutes of use, and then recovering cash into the operator through a wholesale business relationship with the vendors. There is really very little difference between this and the corresponding process of ingesting cash into a mobile payments system – which the subscribers were quick to understand and repurpose the airtime-selling network accordingly.

But as the invaluable Valuable Bits blog points out, there is one big difference between informal airtime credit transfer and formal m-banking; transaction cost. You can be confident of getting the minutes of use you pay for, but what happens when it comes to converting them back into cash? Well, you don’t know. Valuable Bits estimates that the transaction cost ranges between 5 and 40 – 40! – per cent of the transaction, a figure that makes even Western Union’s margins look modest. And worse, it’s not a risk but an uncertainty. This form of money varies in value between people and between markets, and also in time. The canonical purposes of money are as a means of exchange, a store of value, and a unit of account – stability is crucial for all of these.

So, it’s crucial to build a network of agents who are trusted by both the network and the public, so that the system can both accept cash and pay it back out. The golden rule of cellular has always been that superior coverage wins. If you’re already selling airtime this way, you’ve got an advantage; and in fact, there is an earlier alternative system that works this way. In some places, bus companies use the fact they collect cash in strange and remote places to run a similar money transfer business. In fact, you don’t necessarily need a transport system at all – the hawala has worked rather well for many, many years purely on trust and the assumption that transfers roughly balance out.

In a realistic deployment, it’s likely that there will be clearly defined source and sink areas, though – for example, people in the city (a source) send money to the countryside (a sink), migrants to the Gulf (a source) send money back to East Africa (a sink). So it’s more complicated than we often think; the wholesale element may need to advance cash to agents in some places in order to keep the system liquid, rather like a central bank. But whatever else you do, first of all, you need the agents, which means that the business model must make room for them to earn a living.

M-PESA originally used the simplest possible option – a fixed transaction fee. This has the problem that it is regressive; the poor pay more as a percentage of their transactions. In an environment where the competition is cash or the informal sector, this worked against their interests; they later introduced a scale of pricing that tapered the transaction fee off as the transaction size fell. Either way, the pricing was pre-determined with regard to the end user.

ZAP works completely differently. Instead of a rate card, ZAP has a revenue-share between the agents and the network, and the vendors can set whatever price they believe the market will bear. Further, Zain is planning to monetise this by collecting an explicit transaction fee from their agents in cash; most other operators have instead used an implicit fee by charging for SMS or USSD traffic used by the service.

In an oversimplified way, this ought to have the effect of rapidly discovering the market clearing price. However, it’s also true that the market for this service is likely to be geographically fragmented, locally monopolistic, and skewed by asymmetric information. In pure economic theory, this may be a problem but it won’t be for long – the markets will eventually converge. But businesses don’t live in theory – they live in practice, and a bad start can easily wreck your chances for good. Remember WAP.

It’s a brave decision from Zain, but we’re concerned it may defeat the purpose of m-banking. After all, one of the main sources of value to the end-user is getting rid of the uncertainty, risk, and transaction costs associated with informal solutions. The famous Kerala study showed that the deployment of GSM radically cut the volatility of the price of fish, and also the spreads between different markets, with the result that the volume of fish that failed to find a buyer before going off was drastically curtailed. The chart below shows the price of fish over time at three markets which successively received GSM coverage; the drop in volatility is clearly shown. 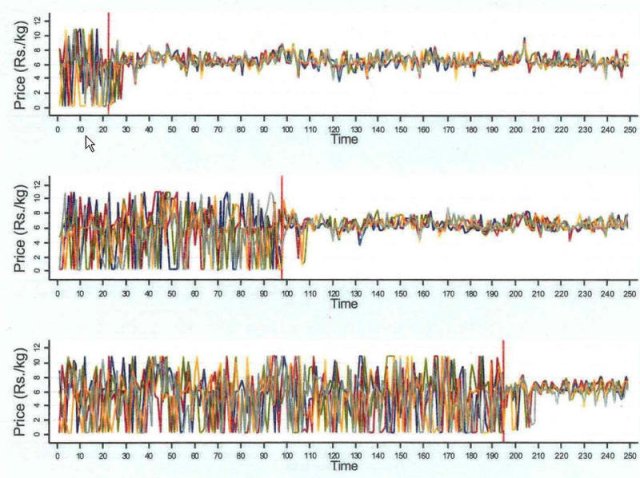 Uncertainty and transaction costs are exactly the friction that Telco 2.0 keeps saying that telcos should specialise in getting rid of; they are also very often the reason why people decide to form a two-sided trading hub.Hernando de Soto, the Peruvian economist who argues that secure title to property and land is the crucial factor in economic development, has paid the price of success by having his views turn into an oversimplified cliche, but few would disagree with his basic contention that uncertainty and insecurity are a major brake on bottom-up economic development. Therefore we’re concerned that a degree of this seems to be inherent in this model.

Perhaps this is intended to encourage the recruitment of agents. However, field reports suggest that the agents themselves are harder to find than their competitors. Zain is also charging for both deposits and withdrawals; two-sided theory would suggest that it would be wiser to choose one side to subsidise in order to build transaction numbers.

Experience in West Africa with Orange’s m-banking operations shows that a significant (15%) share of revenue can come from bank interest on customer balances, and the greater the volume of money in the system, the more likely it is that transactions will be carried out by credit transfer rather than cash.

Our preliminary analysis is therefore that deposits should probably be free, that pricing should be as stable and transparent as possible and probably collected implicitly (as SMS or USSD service charges), and that agents should perhaps receive an allocation of free minutes of use for sale in recognition of their recruitment of users rather than cash, minimising the complexity of the system’s internal economy and its need for internal cash transfers.

Do’s and Don’ts of M-banking

On this score, we suspect that Zain may need to change its m-banking business model to compete with M-PESA and Z-PESA effectively.