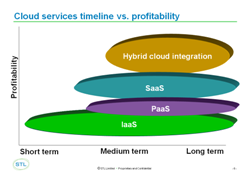 Below is an extract from this 28 page Telco 2.0 Report that can be downloaded in full in PDF format by members of the Telco 2.0 Executive Briefing service and the Cloud and Enterprise ICT Stream here. Non-members can subscribe here, buy a Single User license for this report online here for £795 (+VAT), or for multi-user licenses or other enquiries, please email contact@telco2.net / call +44 (0) 207 247 5003.

In our previous analyses Cloud 2.0: What are the Telco Opportunities? and Cloud 2.0: Telcos to grow Revenues 900% by 2014 we’ve looked broadly at the growing cloud market opportunity for telcos. This new report takes this analysis forward, looking in detail at the service definitions, market forecasts and the industry’s confidence in them, and actual and potential strategies for telcos.

We’ll also be looking in depth at the opportunities in cloud services in the Cloud 2.0: Transforming technology, media and telecoms at the EMEA Executive Brainstorm in London on Thursday 10th November 2011.

Cloud computing represents the next wave of IT. Almost all organisations are saying that they will adopt cloud computing to a greater or lesser extent, across all segments and sizes. Consequently, we believe that there exists a large opportunity for telcos if they move quickly enough to take advantage of it.

In order to understand where the best opportunities are and how telcos can best take use their particular strengths to advantage of them, we need to examine the size of that opportunity and to understand which areas of cloud computing are most likely to offer the best returns.

Predictions for the size and growth of the cloud computing market are very diverse:

Whichever way you look at it, the volume of spending on cloud computing is high and growing. But why are there such large variations in the estimates of that growth?

There is a clear correlation between the report dates and the market forecast sizes. Two of the forecasts – from Merrill Lynch and Gartner – are well over two years old, and are likely to have drawn conclusions from data gathered before the 2008 recession started to bite. Both are almost certainly over-optimistic as a result, and are included as an indication of the historic uncertainty in Cloud forecasts rather than criticism of the forecasters.

More generally, while each forecaster will be using different assumptions and extrapolation techniques, the variation is also likely to reflect a lack of maturity of the cloud services market: there exists little historical data from which to extrapolate the future, and little experience of what kinds of growth rates the market will experience. For example, well-known inhibitors to the adoption of cloud, such security and control, have yet to be resolved by cloud service providers to the point where enterprise customers are willing to commit a substantial volume of their IT spending.

Additionally, the larger the organisation, the slower the adoption of cloud computing is likely to be; it takes a long time for large enterprises to move to a new computing model that involves changing fundamental IT architectures and will be a process undertaken over time. It is hard to be precise about the degree to which they will inhibit the growth of cloud acceptance.

As a result, in a world where economic uncertainty seems unlikely to disappear in the short to medium term, it would be unwise to assume a high level of accuracy for market sizing predictions, although the general upward trend is very clear.

Of the forecasts available, we prefer Bain’s near term forecast because: 1) it is based on their independent Cloud ‘Center of Excellence’ work; 2) it is relatively recent, and 3) it has clear and meaningful categories and definitions.
The following figure summarises Bain’s current market forecast, split by cloud service type.

Currently, telcos have around a 5% share of the c.$20 billion annual cloud services revenue, with 25 % CAGR forecast to 2013.

At the May 2011 EMEA Telco 2.0 Executive Brainstorm, we used these forecasts as a base to explore market views on the various cloud markets. There were c.200 senior executives at the brainstorm from industries across Telecoms, Media and Technology (TMT) and, following detailed presentations on Cloud Services, they were asked highly structured questions to ascertain their views on the likelihood of telco success in addressing each service.

Infrastructure as a Service (IaaS)

IaaS consists of cloud-based, usually virtualised servers, networking, and storage, which the customer is free to manage as they need. Billing is typically on a utility computing model: the more of each that you use, the more you pay. The largest of the three main segments, Bain forecasts IaaS to be worth around $3.5 billion in 2011, with 45 % CAGR forecast. The market leader is Amazon with about 18 % share. Other players include IBM and Rackspace. Telcos currently have about 20 % of this market – Qwest/Savvis/Equinix, and Verizon/Terremark.

Respondents at the EMEA Telco 2.0 Brainstorm estimated that telcos could take an average share of 25% of this market. The distribution was reasonably broad, with the vast majority in the 11-40% range.

…Members of the Telco 2.0 Executive Briefing Subscription Service and the Cloud and Enterprice ICT Stream can download the full 28 page report in PDF format here. Non-Members, please subscribe here, buy a Single User license for this report online here for £795 (+VAT), or for multi-user licenses or other enquiries, please email contact@telco2.net / call +44 (0) 207 247 5003.