The myth of a youth-only digital world

Terms such as ‘Digital Kids’, ‘Digital Natives’ and ‘Digital Immigrants’ have been bandied around for the last few years in an attempt to distinguish people who are comfortable using the Internet, and adopting Web 2.0 solutions, from the rest of us who are generally considered sceptical grey-haired laggards. The former group are young and have been weaned on digital technologies; the latter are older and have discovered mobile telephony and the internet in their adult lives. Indeed, when STL Partners was planning this report its working title was Digital Kids: Understanding the Customer of the Future.

So why did we switch to Serving the Digital Generation: Innovation for a new breed of customer? Research by a non-profit think-tank, The Pew Internet Project, in the US suggests that associating digital culture with younger people is over-simplistic. Differences in internet usage and adoption of ‘Web 2.0 behaviour do not divide neatly between the younger and older generations. There are not only more and more ‘silver surfers’, but they are also displaying decidedly Web 2.0 tendencies.

Internet usage skewed towards young but oldies catching up

It is true that the younger adult generations (Generation X and Y, aged 33-44 and 18-32) are over-represented on the internet. However, Older Boomers (45-54), none of whom would have grown up with computers let alone the internet, are also over-represented. Indeed, dramatic under-use of the internet can only be found in the oldest segment (G.I. Generation, aged 73+) where, it is safe to say, age and infirmity will be preventing some people from using the internet. 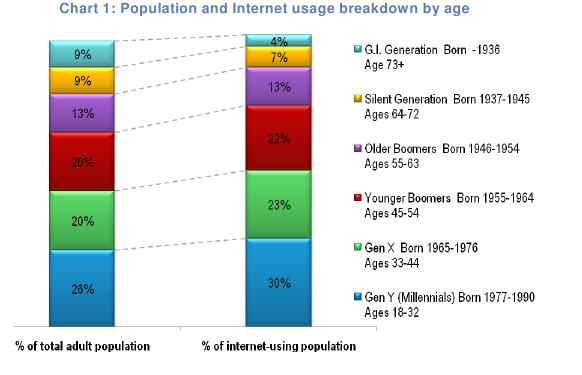 It is clear that there is a correlation between age and internet usage if we look at the proportion of each age segment that is online. Teens (excluded in the analysis above), lead the way, with 93% of all 12-17 year olds using the internet. They are closely followed by Gen Y (the next youngest group aged 18-32) with other segments following closely before a more substantial drop-off with those aged 64 and over. 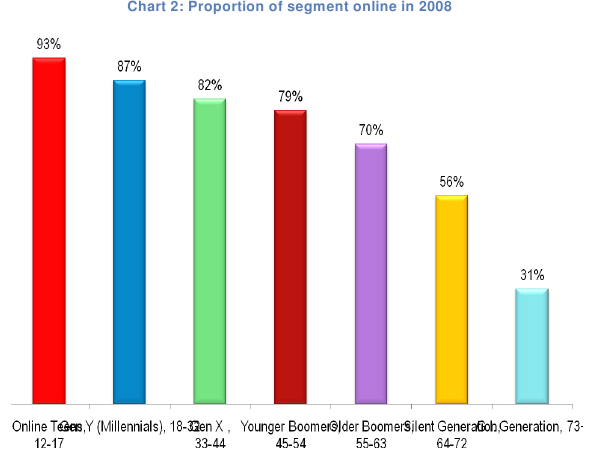 It is interesting to note the relatively small differences in internet usage between the ‘Digital Natives’ (Teens and Gen Y), who were born after the rise of the PC and Web, and the ‘Digital Immigrants’ (Gen X and Younger Boomers) who have become familiar with the digital world through their working lives. This begs the question whether internet usage is purely a function of life-stage with teens and workers using it to manage their lives and retirees finding it less useful. If this was the case, then it is likely that the older generations would be consistently under-represented over time and suggest that internet usage of today’s young will reduce as they get older.

However, this is not the case. As Chart 3 shows, internet usage has grown fastest in the least-penetrated older segments (the Silent and G.I Generations). In other words, they may be coming late to the internet party but they are coming. If we were to look at Chart 3 again in seven years time, STL Partners forecasts that there would be a gradual downward trend in internet use through the age groups and that the rapid fall-off that we currently see over age 60 would be pushed back to over 70. 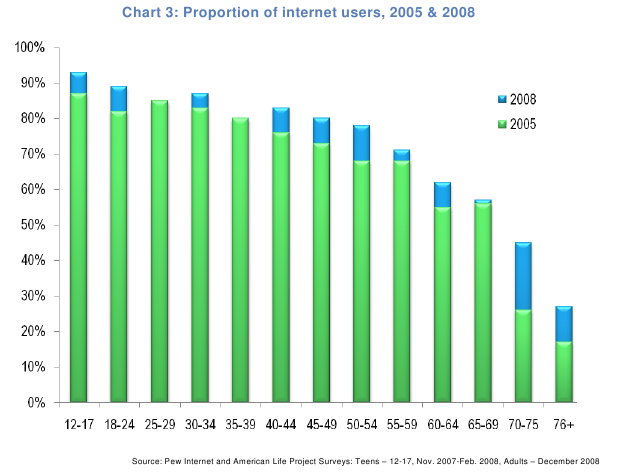 If all age groups or generations are moving online, albeit at varying speeds, they are doing so for different reasons and this is reflected in diverse behaviours. This is not to say that the ‘Web 2.0’ behaviours of participation and engagement (outlined in the last section) are the domain of the younger generation, only that each generation engages and participates in distinct ways. The Web 2.0 behaviour of the Gen Y segment is different to that of the Gen X and the Boomers, but both are Web 2.0 in that they involve active engagement from users.

Chart 4 illustrates this point. The three activities at the top of the chart (Use social networking sites; send instant messages; play online games) are heavily skewed to the younger (Gen Y) age group. 67% of Gen Y claim to use social networks compared with the next highest segment (Gen X) on only 36%. There may be a definition issue here, as many Gen X users are likely to only classify consumer-oriented sites such as Facebook, MySpace and Bebo as social networking sites and would ignore business sites such as Plaxo and LinkedIn. Nevertheless, the youth skew for social networking is clear. And the situation for instant messages and playing games is similar. 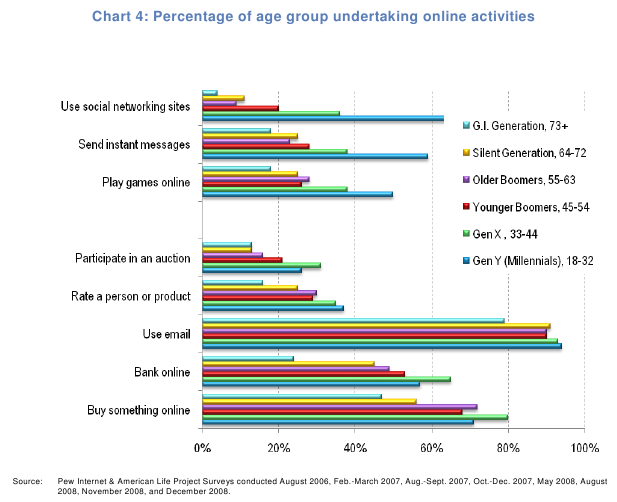 The reasons for lack of adoption and usage by older age groups for the three activities at the top of the chart vary by activity. STL Partners believes that there is nothing inherently alien about these ‘Web 2.0′ activities – it is just that they do not meet the specific needs of the other segments. Older segments adopt new technologies and solutions more slowly than younger ones who are more comfortable taking risks and learning new things, but these are not the reasons why oldies never adopt some things. Social networking, game playing and instant messaging are likely to remain youth-oriented not because they will always frighten older segments by their newness, but simply that they do not meet their needs as well. Social networking is a good example (see Chart 5). It mimics online what the older generations did in their bedrooms, in cafes and behind the bike sheds when they were young: experiment with their tastes, share their views on youth culture and rail against their parents’ generation with their peers. Today’s younger generation find the web, and social networking sites in particular, the best medium for these activities. 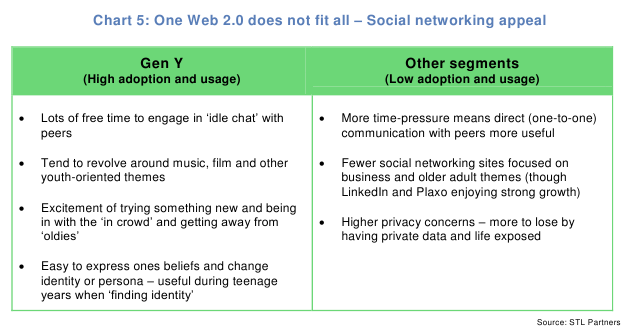 This is reflected in the statistics for Facebook usage in the US which indicates that that 13-34 year olds account for 78% of users (Chart 6). 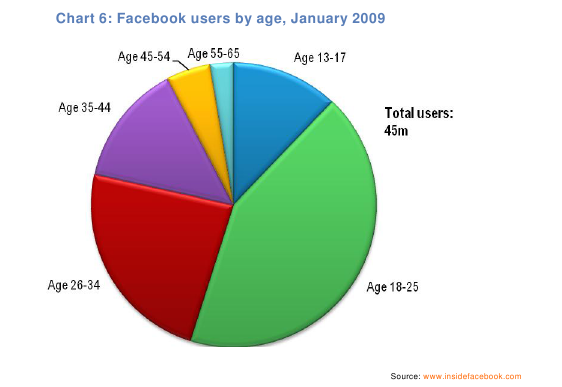 The desire to socialise, participate and engage remains, however, a core human need that crosses age boundaries. There is a myth that younger generations are somehow different because they participate in wikis, blogs and social networks. But older generations participate and socialise just as much. Even the 64+ year old retirees, the laggards of the internet world, want to be involved and shape their world. Visit any lawn bowling club in the UK, watch French men playing boules in the market square, or sit in on a neighbourhood meeting in the US and the story is the same: older people are taking positions of responsibility, contributing to their communities and effecting change.

As Chart 4 shows, the older generations also participate online in areas that are relevant and useful to them. They are just as likely to bank online, participate in an auction, rate a person or product, or send an email as the Gen Y crowd. But even in these areas they are likely to do so in a different way. Take email, for example, where older generations are more likely than their younger counterparts to:

• Write longer and more formal emails in the style of a letter; • Ask for a ‘read receipt’ when they send a mail; • Confirm receipt with a follow up phone call; • Become anxious or impatient if they do not receive a prompt reply. …Different attitudes and activities within age segments too

Things are complicated because, while there are differences in attitude and service adoption between generations, there are also fundamental differences within them. Several service providers now segment the 55+ age group based on fine-grained demographic and attitudinal characteristics and link this to demand for products and services. See Chart 7, below, for a typical segmentation of this age group. 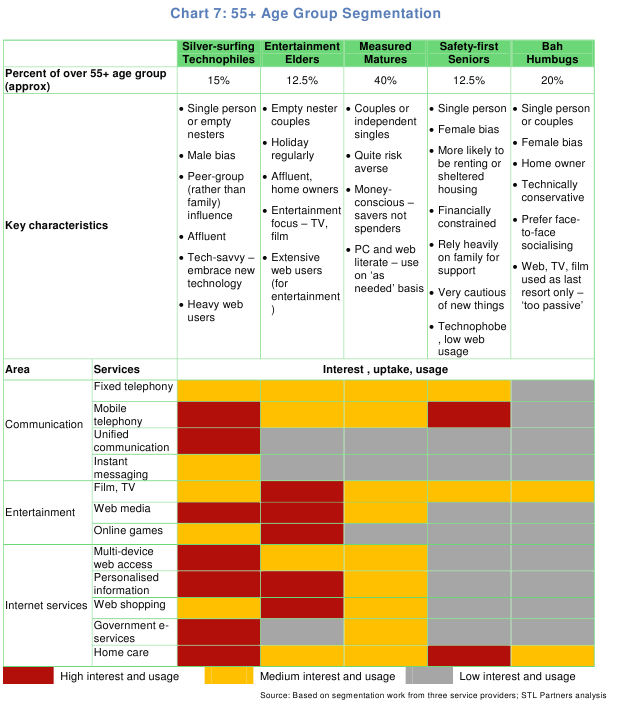 Just under 30% of this age group are highly engaged online and via mobile (Silver-surfing Technophiles and Entertainment Elders); 40% do so selectively (Measured Matures); and around 30% have limited engagement in digital and mobile activities except where it provides better safety for them (Safety-first Seniors and Bah Humbugs). Each age group is, it seems, an eclectic bunch.

It is clear that the younger generation are currently leading the digital charge. They are faster at adopting and using the internet, as well as a broad range of online activities. However, it is also apparent that, although there are clear behavioural and attitudinal differences between and within the generations, a desire to communicate with peers, participate in (online and offline) communities, and contribute to the creation of new solutions is a central part of being human.

Some forms of Web 2.0 behaviour will remain the domain of the young. Others, such as blogging, wikis and product reviews, will permeate through the generations over time. As such, the lessons of how to better foster interactivity and participation with customers, which lie at the heart of the forthcoming Telco 2.0 strategy report , will increasingly be relevant to companies providing services to all segments – young and old. In a sense, therefore, whether we aspire to it or not, we are all becoming part of the digital generation…