Software Defined Networking or SDN is a technological approach to designing and managing networks that has the potential to increase operator agility, lower costs, and disrupt the vendor landscape. Its initial impact has been within leading-edge data centres, but it also has the potential to spread into many other network areas, including core public telecoms networks.

With SDN, networks no longer need to be point to point connections between operational centres; rather the network becomes a programmable fabric that can be manipulated in real time to meet the needs of the applications and systems that sit on top of it. SDN allows networks to operate more efficiently in the data centre as a LAN and potentially also in Wide Area Networks (WANs).

SDN is new and, like any new technology, this means that there is a degree of hype and a lot of market activity:

However there still isn’t widespread clarity of what SDN is and how it might be used outside of vendor papers and marketing materials, and there are plenty of important questions to be answered. For example:

Vendors are to a degree adding to the confusion. For example, Cisco argues that it already has an SDN-capable product portfolio with Cisco One. It says that its solution is more capable than solutions dominated by open-source based products, because these have limited functionality.

This executive briefing will explain what SDN is, why it is different to traditional networking, look at the emerging market with some likely use cases and then look at the implications and benefits for service providers and vendors.

How and why has SDN evolved?

SDN has been developed in response to the fact that basic networking hasn’t really evolved much over the last 30 plus years, and that new capabilities are required to further the development of virtualised computing to bring innovation and new business opportunities. From a business perspective the networking market is a prime candidate for disruption:

New features and capabilities have been added to traditional equipment, but have tended to bloat the software content increasing costs to both purchase and operate the devices. Nevertheless – IP Networking as we know it has performed the task of connecting two end points very well; it has been able to support the explosion of growth required by the Internet and of mobile and mass computing in general.

Traditionally each element in the network (typically a switch or a router) builds up a network map and makes routing decisions based on communication with its immediate neighbours. Once a connection through the network has been established, packets follow the same route for the duration of the connection. Voice, data and video have differing delivery requirements with respect to delay, jitter and latency, but in traditional networks there is no overall picture of the network – no single entity responsible for route planning, or ensuring that traffic is optimised, managed or even flows over the most appropriate path to suit its needs.

One of the significant things about SDN is that it takes away the independence or autonomy from every networking element in order to remove its ability to make network routing decisions. The responsibility for establishing paths through the network, their control and their routing is placed in the hands of one or more central network controllers. The controller is able to see the network as complete entity and manage its traffic flows, routing, policies and quality of service, in essence treating the network as a fabric and then attempting to get maximum utilisation from that fabric. SDN Controllers generally offer external interfaces through which external applications can control and set up network paths.

There has been a growing demand to make networks programmable by external applications – data centres and virtual computing are clear examples of where it would be desirable to deploy not just the virtual computing environment, but all the associated networking functions and network infrastructure from a single console. With no common control point the only way of providing interfaces to external systems and applications is to place agents in the networking devices and to ask external systems to manage each networking device. This kind of architecture has difficulty scaling, creates lots of control traffic that reduces overall efficiency, it may end up with multiple applications trying to control the same entity and is therefore fraught with problems.

It is worth noting that an initiative complementary to SDN was started in 2012 called Network Functions Virtualisation (NFV). This complicated sounding term was started by the European Telecommunications Standards Institute (ETSI) in order to take functions that sit on dedicated hardware like load balancers, firewalls, routers and other network devices and run them on virtualised hardware platforms lowering capex, extending their useful life and reducing operating expenditures. You can read more about NFV later in the report on page 20.

In contrast, SDN makes it possible to program or change the network to meet a specific time dependant need and establish end-to-end connections that meet specific criteria. The SDN controller holds a map of the current network state and the requests that external applications are making on the network, this makes it easier to get best use from the network at any given moment, carry out meaningful traffic engineering and work more effectively with virtual computing environments.

What is driving the move to SDN?

The Internet and the world of IP communications have seen continuous development over the last 40 years. There has been huge innovation and strict control of standards through the Internet Engineering Task Force (IETF). Because of the ad-hoc nature of its development, there are many different functions catering for all sorts of use cases. Some overlap, some are obsolete, but all still have to be supported and more are being added all the time. This means that the devices that control IP networks and connect to the networks must understand a minimum subset of functions in order to communicate with each other successfully. This adds complexity and cost because every element in the network has to be able to process or understand these rules.

But the system works and it works well. For example when we open a web browser and a session to stlpartners.com, initially our browser and our PC have no knowledge of how to get to STL’s web server. But usually within half a second or so the STL Partners web site appears. What actually happens can be seen in Figure 1. Our PC uses a variety of protocols to connect first to a gateway (1) on our network and then to a public name server (2 & 3) in order to query the stlpartners.com IP address. The PC then sends a connection to that address (4) and assumes that the network will route packets of information to and from the destination server. The process is much the same whether using public WAN’s or private Local Area Networks.

Figure 2 – Process of connecting to an Internet web address

The Internet is also highly resilient; it was developed to survive a variety of network outages including the complete loss of sub networks. Popular myth has it that the US Department of Defence wanted it to be able to survive a nuclear attack, but while it probably could, nuclear survivability wasn’t a design goal. The Internet has the ability to route around failed networking elements and it does this by giving network devices the autonomy to make their own decisions about the state of the network and how to get data from one point to any other.

While this is of great value in unreliable networks, which is what the Internet looked like during its evolution in the late 70’s or early 80’s, networks of today comprise far more robust elements and more reliable network links. The upshot is that networks typically operate at a sub optimum level, unless there is a network outage, routes and traffic paths are mostly static and last for the duration of the connection. If an outage occurs, the routers in the network decide amongst themselves how best to re-route the traffic, with each of them making their own decisions about traffic flow and prioritisation given their individual view of the network. In actual fact most routers and switches are not aware of the network in its entirety, just the adjacent devices they are connected to and the information they get from them about the networks and devices they in turn are connected to. Therefore, it can take some time for a converged network to stabilise as we saw in the Internet outages that affected Amazon, Facebook, Google and Dropbox last October.

The diagram in Figure 2 shows a simple router network, Router A knows about the networks on routers B and C because it is connected directly to them and they have informed A about their networks. B and C have also informed A that they can get to the networks or devices on router D. You can see from this model that there is no overall picture of the network and no one device is able to make network wide decisions. In order to connect a device on a network attached to A, to a device on a network attached to D, A must make a decision based on what B or C tell it. 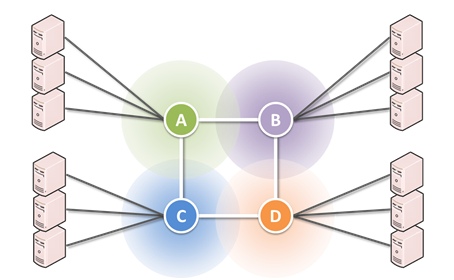 This model makes it difficult to build large data centres with thousands of Virtual Machines (VMs) and offer customers dynamic service creation when the network only understands physical devices and does not easily allow each VM to have its own range of IP addresses and other IP services. Ideally you would configure a complete virtual system consisting of virtual machines, load balancing, security, network control elements and network configuration from a single management console and then these abstract functions are mapped to physical hardware for computing and networking resources. VMWare have coined the term ‘Software Defined Data Centre’ or SDDC, which describes a system that allows all of these elements and more to be controlled by a single suite of management software.

Moreover, returning to the fact that every networking device needs to understand a raft of Internet Request For Comments (or RFC’s), all the clever code supporting these RFC’s in switches and routers costs money. High performance processing systems and memory are required in traditional routers and switches in order to inspect and process traffic, even in MPLS networks. Cisco IOS supports over 600 RFC’s and other standards. This adds to cost, complexity, compatibility, future obsolescence and power/cooling needs.

SDN takes a fresh approach to building networks based on the technologies that are available today, it places the intelligence centrally using scalable compute platforms and leaves the switches and routers as relatively dumb packet forwarding engines. The control platforms still have to support all the standards, but the platforms the controllers run on are infinitely more powerful than the processors in traditional networking devices and more importantly, the controllers can manage the network as a fabric rather than each element making its own potentially sub optimum decisions.

As one proof point that SDN works, in early 2012 Google announced that it had migrated its live data centres to a Software Defined Network using switches it designed and developed using off-the-shelf silicon and OpenFlow for the control path to a Google-designed Controller. Google claims many benefits including better utilisation of its compute power after implementing this system. At the time Google stated it would have liked to have been able to purchase OpenFlow-compliant switches but none were available that suited its needs. Since then, new vendors have entered the market such as BigSwitch and Pica8, delivering relatively low cost OpenFlow-compliant switches.

To read the Software Defined Networking in full, including the following sections detailing additional analysis…