Recent data on the growth of the Internet shows that different public policies have dramatically different impacts. In Latin America, two nations following very similar policies are achieving spectacular success, both in terms of raw quantity and in terms of deeper qualitative improvement, while other countries, sometimes with higher per-capita GDP, pursue different policies and see radically worse results.

In the Middle East, there is evidence of a similar breakout to development in some surprising countries, which turn out to be adopting key elements of the policy mix that has been successful in Latin America.

Renesys, a US company which provides software tools to monitor Border Gateway Protocol BGP routing activity, also collects large amounts of data on the structure of the Internet as a by-product of this activity. In May 2013, they issued a fascinating blog post, which drew attention to the dramatic development gap emerging between – for example – Brazil and Argentina on one hand, and Mexico on the other.

AS numbers: a key metric for Internet participation

What Renesys was looking at was the count of ASNs (Autonomous System Numbers) over time, a measure that we believe gives an excellent and profound indication of the development of the internet.

ASNs identify networks that control their own routing policy and IP address block. The voluntary interconnection of autonomous systems through BGP routing, which is based on AS numbers, makes up the fundamental structure of the Internet. In this sense, counting ASNs is a better metric than counting subscribers, domain names, Web sites, or IP addresses, because it is a measurement of participation in the Internet, not just consumption of cat videos and Google adverts. The creation of new ASNs is evidence that new businesses, organisations, content providers, hosting and cloud computing providers, and ISPs are emerging. It is evidence that technical competence is diffusing through society.

So how does the scoreboard look? 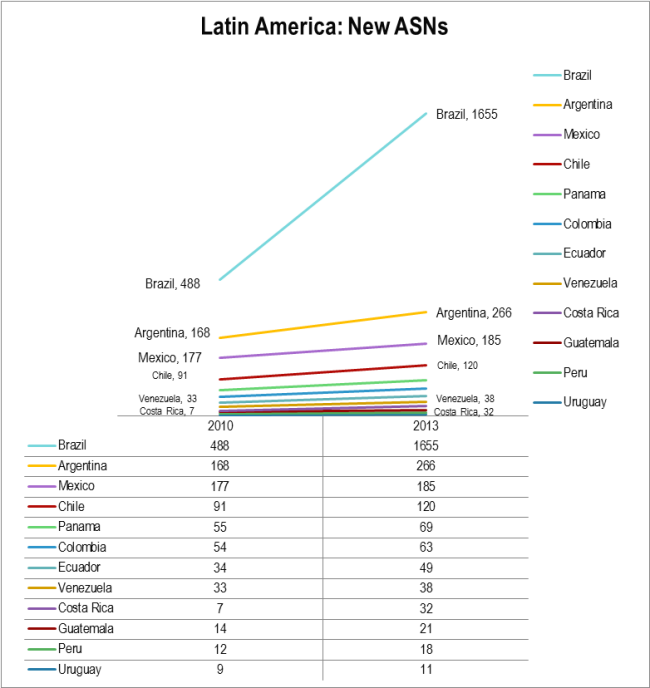 Argentina is doing well; Brazil is doing incredibly well; Mexico is either stable, or stagnant. We’ve labelled the chart selectively, so you can also see that among the poorer and smaller Latin American nations, Costa Rica is doing very well while Venezuela is doing poorly.

Mexico’s per-capita GDP at purchasing-power parity was calculated at $15,312 in 2012 dollars by the IMF, whereas Argentina’s was $18,112. But this gap doesn’t explain what’s going on here. Brazil’s was $11,875, and the Brazilian Internet is doing even better. Clearly, money is not enough. Every year, Brazil adds as many ASNs as there are in the whole of Mexico. This is a reflection of vastly different government policy and market structure. Similarly, there doesn’t seem to be any reliable link between population, ASN growth, or how many citizens there are for each ASN, as the following chart shows. Even GDP is a very weak predictor. 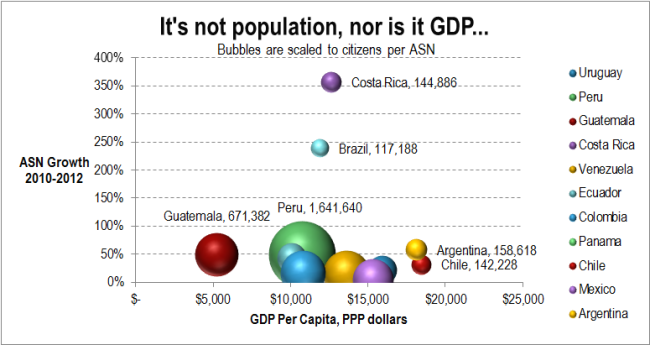