Fixed wireless access: What is the difference between 4G and 5G?

4G has already catalysed rapid growth of fixed wireless access (FWA) in numerous markets, such as South Africa, Japan, Sri Lanka, Italy, and the Philippines. This growth has been driven by the combined impact of mobile network operators (MNOs) commercialising FWA services to households in underserved urban areas, the slow pace of fibre roll-out in some countries, government subsidies for rural broadband, and improvements in network planning tools and customer premise equipment with easier self-install options.

According to our latest research and market forecasts, 5G is likely to have a major impact for operators in the coming years, especially from 2022 onwards as more spectrum becomes available to more operators, and equipment prices fall.

That said, 4G will continue to be more important than 5G in the FWA market overall at a global level over the next 5 years; the technology is much further down the cost- and experience curve, as well as using existing network infrastructure and spectrum.

Using a broad definition, FWA will reach 305m premises by 2026 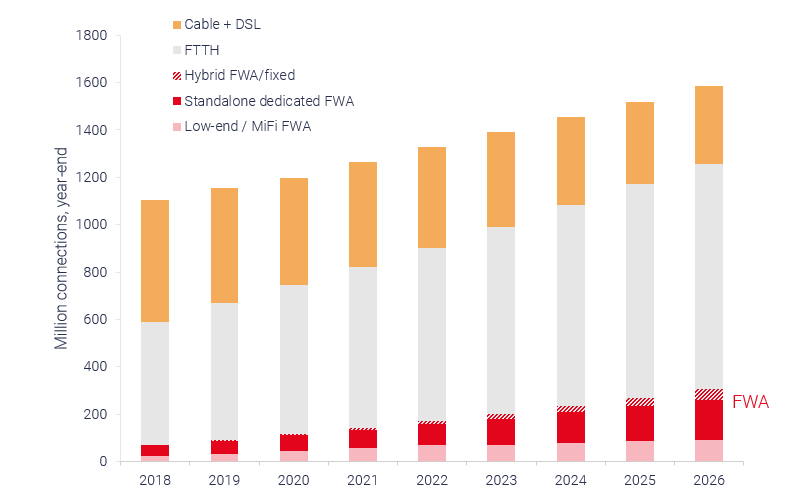 We believe that the biggest changes and opportunities catalysed by 5G FWA will be:

It should also be noted here that 5G is not the only option for gigabit FWA. Various other options are available in this regard, including wireless point-to-point and mesh technologies, such as Facebook’s Terragraph.

STL’s view is that FWA is becoming more mainstream, but certainly does not represent an existential threat to existing broadband providers and vendors. It represents more of a challenge in areas currently with no good broadband, as it may cherry-pick customers (especially the most eager and therefore urgent users) and thus reduce the future economic viability of new fixed-infrastructure deployments. It poses a risk to incumbent DSL broadband, where operators are slow to upgrade to fibre. Its presence will also likely provide downward pressure on pricing in uncompetitive markets.

Rather than thinking about national average levels, it is better to think about FWA as being “mainstream” in specific contexts. FWA has particularly good local mainstream prospects in certain types of area with favourable geography, topography, or demography, such as agricultural communities, island nations, or specific urban settings where it is impractical or too costly to lay fibre.

FWA fits specific use cases, rather than the overall market 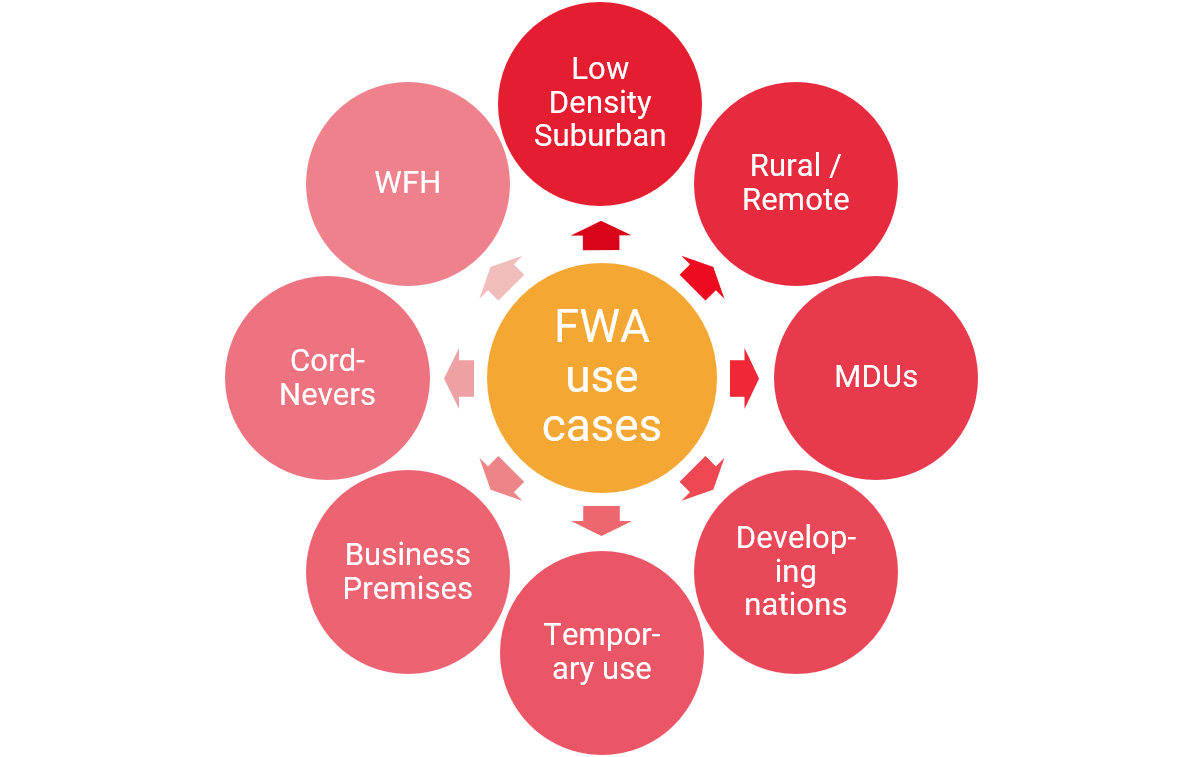 Does the pandemic change anything?

While the COVID-19 pandemic has not shifted the outlook for FWA significantly, it may provide a boost for specific use cases such as connectivity for emergency medical facilities, such as mobile testing tents, growing interest in work from home packages, local authorities exploring how to support remote education, all of which are driving telco executives, governments and investors to pay higher attention on fixed/home broadband.

For many years, FWA in most of the world has been successfully operated by niche providers in areas typically underserved by wireline broadband services. In rural areas, the distances involved often required the use of expensive outdoor customer-premises equipment with line of sight to the base station sites, installed by trained technicians.

The value chain for WISPs remained fairly static, and mostly dominated by niche vendors that were considerably smaller than the network equipment suppliers into fixed broadband and cellular operators.

Where 4G equipment was used for FWA, it was typically used by mobile-only MNOs either adding an extra proposition to soak up excess capacity in a few areas, or where consumer and enterprise MVNO partners developed niche propositions that appealed to the wholesale business unit. They typically used the same vendors as the main cellular RAN – with the exception of enterprise gateways from providers such as Cradlepoint (recently acquired by Ericsson).

This is now changing. The value chain of vendors and service providers is evolving considerably in the 5G and mmWave era, with the shifts being observed in the WISP market as well as the telco domain. New players entering the value chain include: