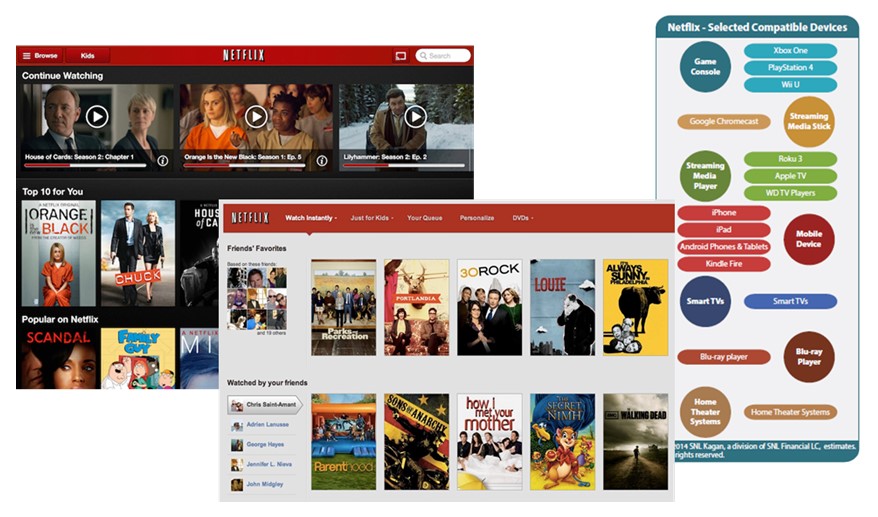 The way in which audiences consume movies and television content appears to be changing.  While ‘linear’ viewing of scheduled channels remains robust, the market for DVD has collapsed and new pricing and consumption models are opening up.

At the forefront of this is Netflix – with a total of 63M paying subscribers across 50 markets (it is present in a large number of locations in Latin America and the Caribbean) and a penetration of over 34% in the US, Netflix has created a new paradigm for on demand content.

How this model is going to impact other players in the market in the long term is as yet unclear. To date in the US, pay platform penetration has remained robust, premium channels such as HBO are also performing strongly, and for rights owners and producers a new player bidding for rights is hugely welcome.

So is Netflix a ‘win: win’ opportunity for all concerned?  It may not be that straightforward.

STL Partners has partnered with Prospero Strategy Consultants who work extensively with content and platform players on new market dynamics to prepare this Briefing. The work has drawn on interviews with key players and analysis of quantitative and qualitative market data, to determine the threats and opportunities emerging from this new content ecosystem and how these are likely to develop.

Netflix began as a postal DVD business in the US in 1997, launching its US subscription streaming service in 2007.  Since 2011 it has focused on rapid expansion into international markets with the biggest growth now coming from international subscribers (67% growth between 2013 and 2014) while its US DVD business is now in decline. 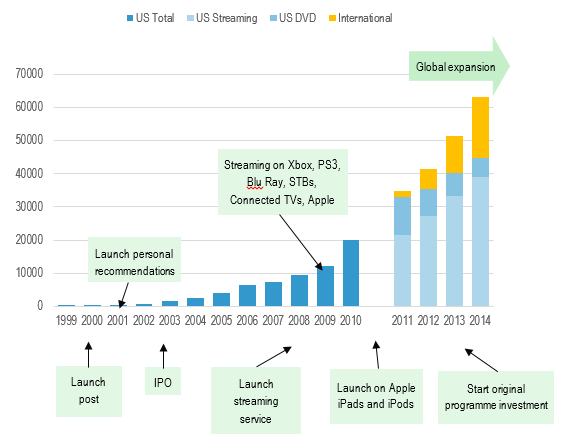 The success of the Netflix proposition to consumers has been based on a number of components:

Low Price
The low monthly price point of Netflix (USD7.99 per month in the US rising to USD8.99 for new subscribers in 2014) has been a key component of the company’s success. This price point is less than the cost of purchasing a single DVD and significantly less than monthly premium drama channels such as HBO (at ~USD15 per month). This price point (and that users are not tied into long term contracts) allows Netflix to attract distinct audience groups.

As demonstrated in Figure 5 above a key to success has been offering both range and quality of content.  However, over time the shape of the Netflix library has changed as it has used its customer insight and data to inform its rights strategy.

Netflix’s early content deals were typically library rights and non-exclusive.  Over time that mix has shifted as Netflix increasingly looks to have a component of exclusivity with the aim of shifting from a “nice to have” to a “must have” service 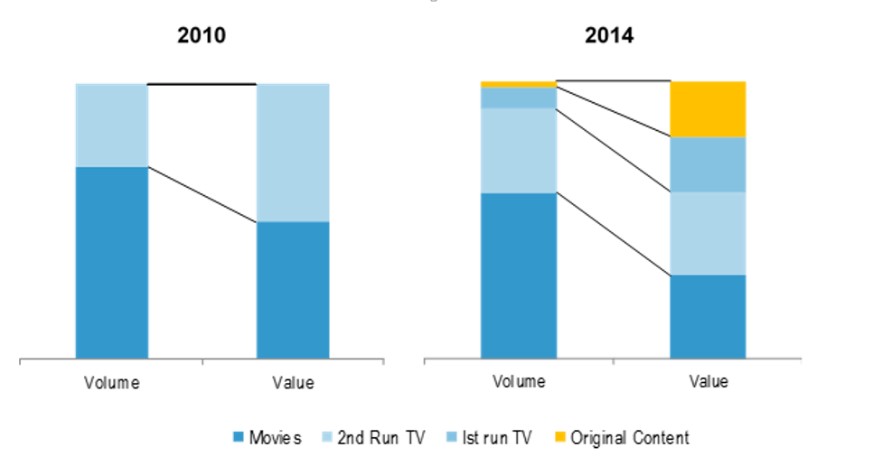 Netflix has evolved a highly effective consumer interface, enabling personalisation by individual members in the household, with an easy to manage and visually effective selection mechanism.