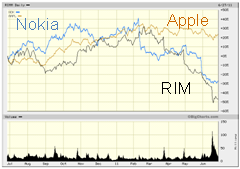 Below is an extract from this 12 page Telco 2.0 Report that can be downloaded in full in PDF format by members of the Telco 2.0 Executive Briefing service here. Non-members can buy a Single User license for this report online here for £295 (+VAT) or subscribe here. For multiple user licenses or other enquiries please email contact@telco2.net or call +44 (0) 207 247 5003.

RIM’s shares have plummeted in value over the last four months, prompting an eruption of finger-pointing in the media and speculation of its demise or acquisition. In this analysis we examine whether the doom-mongers are right and what RIM’s recovery strategy might be.

‘Reports of my death are greatly exaggerated’ – US writer Mark Twain, 1907, when he failed to return to New York City as scheduled and The New York Times speculated that he might have been “lost at sea.”

With its iconic Blackberry devices, RIM led the way in the mobile messaging era – first in corporate and then in consumer markets. But the transition to the mobile web has seen it surpassed by Apple and Google in consumer developed markets. In this respect RIM faces the same challenge as Nokia. And yet, despite facing the same challenge, RIM and Nokia have taken completely different strategic options for their future. When Nokia announced its partnership with Microsoft it pointedly talked about the creation of the third platform for the mobile web alongside Apple and Google – Nokia effectively discounted RIM from the game.

Current Position – on the surface, OK, but…

At first glance, RIM looks in a healthy position and its recent results show that both handset shipments (13.2m vs 11.2m) and revenues (US$4.9bn vs US$4.2bn) were up on the previous year. RIM is making reasonable profits (US$695m) and has a healthy cash position (US$2.9bn). But under the hood, life is not looking as rosy.

RIM’s accounts show that its absolute profits are declining as growth in R&D and S&M costs are exceeding the slowing growth in revenues.

Of course, rising R&D and S&M costs may ultimately result in new revenues, although at present the effects of this spending are not yet evident in overall performance.

Revenues: Squeezed out of Key Markets

RIM’s revenues are dropping in key markets, particularly the USA, and its growth in revenues is coming from emerging markets.

RIM’s share of the overall smartphone market is declining.

New devices such as the updated Bold 9900 have missed planned release dates.

To read the rest of this report, including…

…Members of the Telco 2.0 Executive Briefing Subscription Service can download the full 14 page report in PDF format here. Non-Members, please see here for how to subscribe, here to buy a single user license for £295, or for multi-user licenses and any other enquiries please email contact@telco2.net or call +44 (0) 207 247 5003.