As we showed in a recent report titled Mobile app latency in Europe: French operators lead; Italian & Spanish lag, with the modern Internet dominated by flows of small packets on fast networks, latency accounts for the biggest share of total load times and tends to determine the actual data transfer rates users see. And, as web and mobile applications increasingly consist of large numbers of requests to independent ‘microservices’, jitter – the variation in latency – becomes a more significant threat to the consumer experience. Furthermore, we benchmarked major European mobile network operators (MNOs) on average latency and the rate of unacceptably high-latency events (over 500ms).

In this second report on latency, which again uses data provided by app analytics specialist Apteligent (formerly Crittercism), we look at the rate of app errors – evidently, something that could not impact user experience more directly – and its correlation with both latency, and the rate of unacceptable high-latency events. We explore how often apps fail across the same set of MNOs, test if latency is a driver of app errors, and then conclude whether or not our theory that it is a real driver of consumer experience is correct.

Our partner, Apteligent, collects a wide variety of analytics data from thousands of mobile apps used by hundreds of millions of people around the world in their every-day lives and work. To date, the primary purpose of the data has been to help app developers make better apps. We are now working with Crittercism to produce further insights from the data to serve the global community of mobile operators.

This data-set includes the average network latency experienced at the application layer, the percentage of network requests above 500ms round-trip time, the 5th and 95th percentiles, and the rate of application errors. All of these data points are useful in trying to understand the overall experience of customers using their mobile apps, and in particular the delays and problems they’ve experienced such as long screen wait times and applications failing to work.

We showed in the previous report how the longest round-trip delays or ‘app-lags’ (i.e. those over 500ms) are the most important KPI to look at when trying to understand customer experience. This is firstly because people really notice individual delays of this length. For people used to high speed broadband, it’s like going back to narrowband internet – it seems incredibly slow!

Importantly though, in modern apps, the distribution of delays is even more significant, as each app or web page typically makes multiple requests over the internet before it can load fully – and each of these requests will suffer some form of delay or latency.

A detailed explanation of this and of the collection methodology is available in the first report.

The Impact of latency on app errors

First glance: a positive correlation overall, but a weak one

The following chart shows the error rate per 10,000 app requests, plotted against the percentage of requests over 500ms round-trip time, by carrier. Each dot represents a week’s performance and we’ve looked at 12 weeks of data from 20 operators, from the week of 03/08/15 to the week beginning 19/10/2015. The hypothesis being that the more requests with unacceptable latency there are, the more app errors, because apps ‘time-out’ or key requests are not fulfilled in time causing an app error or, worse, a crash.

Figure 1: Latency and errors for the top 20 European MNOs over the last 12-weeks appear correlated, but there are some important outliers 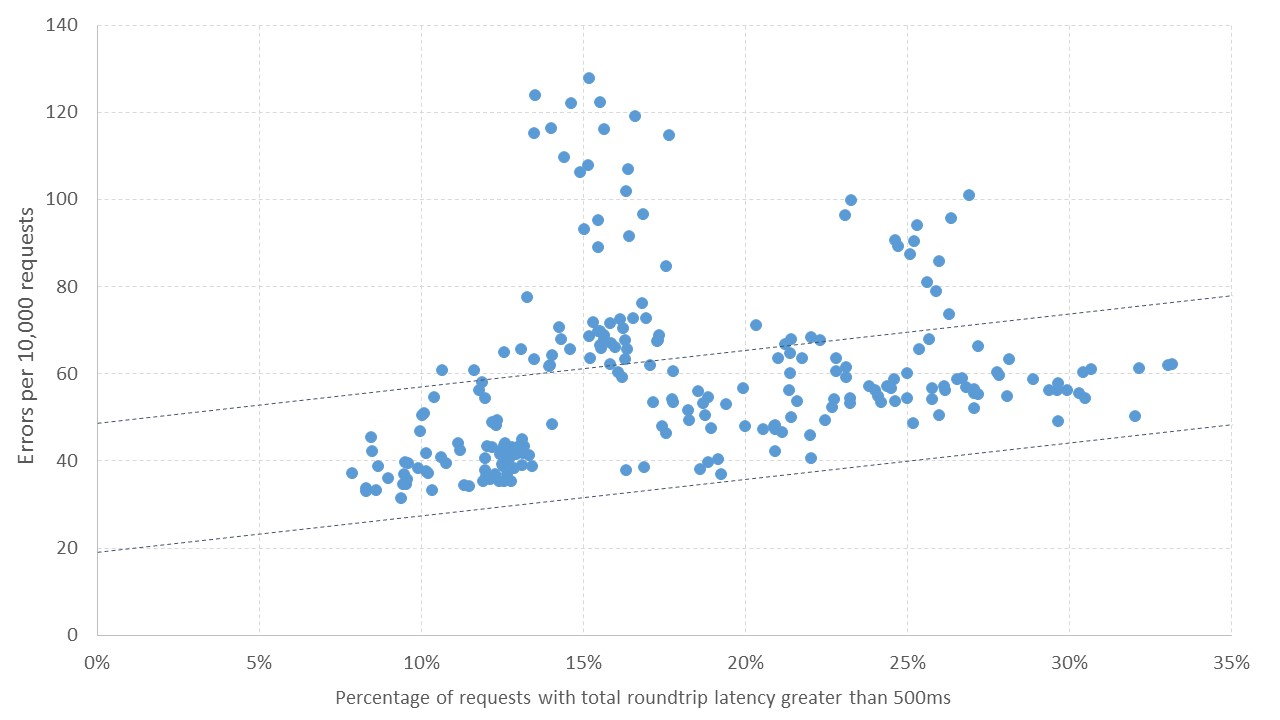 At first glance, there appears to be only a weak positive relationship between latency and error rates but there does seem to be a natural grouping found between the two hand-drawn dotted lines on the chart with the weeks above the upper boundary (potentially) being outliers, in which at least one other factor is driving application errors up.

The lower boundary seems to represent the underlying rate of app-errors that occur when there are no latency issues (between 20 and 50 errors per ten thousand plus an increasing error rate as higher latency kicks in. For example, when 10% of requests experience latency above 500ms, the minimum error rate is around 30 per 10,000 requests, rising to 50 at the 35% mark.