Hyperscalers and telco migration to the public cloud: opportunities and risks

There is a lot of talk in the industry about moving telco workloads to the public cloud. Only a handful of operators have done so – at least publicly. But at STL Partners, we know from talking to our clients and contacts that many more are quietly considering their options. This article examines the existing hyperscaler – telco partnerships, the reasons why operators may be interested in them, and some of the factors which may be holding telcos back.

As telecoms operators attempt to grow their revenues beyond connectivity and deliver multi-access edge computing (MEC) solutions, more are considering working with hyperscalers for both connectivity and MEC. Yet, many leading telcos have held back on hosting critical network functions (NFs) on public clouds. There are, as of now, only a handful of telcos having moved, or with plans to move, their (often core) NFs from their private cloud to a public cloud platform. We list and describe them in the first part of this article. As explained in one of our reports, our view is that the migration of not just IT, but also telco workloads to the public cloud is inevitable, since the potential benefits of doing so outweigh the risks involved. We present this view in the second part of the article.

Although DISH and AT&T are the first to come to mind as telcos that have moved all of their workloads (DISH) or just some of their core workloads (AT&T) to the public cloud, there other operators preparing for the same move or well underway to implementing it. In addition, these are not all Tier 1 player, and not all North American.

It is worth reiterating that what this article is focused on is the migration of network workloads to the public cloud, i.e., the running of Virtual Network Functions (VNFs) or Cloud-native Network Functions (CNFs) by telcos on a cloud infrastructure that they do not own. We are not looking at the numerous examples of telcos having migrated their IT workloads or the management, storage and processing of their customer information or network data to the public cloud.

Amazon Web Services (AWS) and DISH have worked together to produce the first entirely public cloud-based 5G network incorporating both Standalone (SA) core and open RAN. DISH is leveraging the hyperscaler’s infrastructure and breadth of services to deploy a cloud-native 5G network. DISH uses AWS’s whole portfolio of infrastructure, tools and platform capabilities, including compute, container orchestration, IoT platform, machine learning (ML), and security. This partnership is intended, among other things, to enable enterprise clients to customise and scale their network experience on demand, e.g. via network slicing or dedicated private networks. The aim is also to enable 5G applications developed in conjunction with AWS’s or DISH’s partners to be brought to market faster, using familiar AWS tools and services. DISH intends for its network to be used not only to connect mobile and smartphone devices but other IoT applications, such as robots and industrial OT. Yet, given that DISH’s infrastructure and network are entirely hosted on the AWS edge and central cloud, there are concerns that it will become over-dependent on the hyperscaler. On the plus side, by relying on AWS for its telco cloud from the outset, DISH now benefits from an end-to-end horizontal platform which is one of the key elements on the way to full network automation.

Microsoft Azure initially joined forces with AT&T in July 2019. The agreement involved the use of AT&T’s edge facilities to host Azure edge-cloud data centres. The partnership has been used as a springboard for joint or separately developed MEC use cases, such as AI-powered voice translation, drone tracking, and 3D schematic overlays for aeroplane technicians. Following the sale of AT&T’s self-developed Network Cloud (telco cloud platform) to Azure in June 2021, the core NFs that were previously run-on AT&T’s private cloud were expected to be delivered over Microsoft’s ‘Azure for Operators’ public telco cloud. However, AT&T recently revealed that it has also deployed its SA core over a retained private cloud (the AT&T Integrated Cloud (AIC)). This has involved deploying distributed data-plane functions to several edge nodes around the US offering connectivity to multiple HCPs to support MEC service delivery.

Bell Canada deployed the Google Distributed Cloud Edge platform to its edge data centres in February 2022. The intention is to deploy Bell’s SA core on the platform to provide adaptable 5G connectivity in support of innovative third-party application providers operating over Google Cloud. In common with some of the other strategic telco-hyperscaler partnerships, Google Cloud and Bell are exploring how to implement combined 5G and MEC offerings into industries such as manufacturing, healthcare and retail.

Swisscom is incrementally transforming its core NFs to make them fully cloud-native so that they can run on the telco’s own private cloud platform or that of its partner AWS’s. This is paving the way for Swisscom to launch 5G SA core over the AWS cloud. The new SA core supported by AWS is expected to provide higher capacity and faster speeds, making it possible to apply 5G to new use cases, such as driverless cars and remote medical procedures. The partnership between Telenet and Google seems to be of a similar nature and aimed to support the launch of the Belgian operator’s 5G SA core.

Belgian operator Telenet is preparing its 5G SA launch by using Google Cloud’s Anthos for Telecom platform in its data centres to run its core software and other cloud-native applications. The arrangement seems to be similar in its nature to that of Swisscom and AWS. In both cases, it involves close collaboration with the core network vendor as well: Ericsson for Swisscom, and Nokia for Telenet.

Both telecoms operators and hyperscalers have traditionally had a ‘horizontal’ growth strategy. This involves an emphasis on expansion of a portfolio of standardised services that are offered to clients across all vertical markets. Telcos focused on large-scale, standardised commodity products in voice, messaging, data and connectivity. Meanwhile, hyperscalers were concerned with Software-as-a-Service (SaaS) and Infrastructure-as-a-Service (IaaS), including standardised storage, IT networking and compute. Gradually, though, telcos and hyperscalers have converged around opportunities to deliver higher-value, vertical-specific solutions in areas such as SaaS, Platform-as-a-Service (PaaS) and Network-as-a-Service (NaaS). As a result of the cloudification and disaggregation of the network, operators are increasingly able to provide customised solutions to specific industries and enterprise clients.

As telcos expand their business into new solutions, instead of solely connectivity, there may be less focus on the physical infrastructure layer, which can be entrusted to hyperscalers. Yet, in a context where telcos and hyperscalers will increasingly compete for the same business, potential complications may arise for telcos in relying on the hyperscalers to provide their critical infrastructure, i.e. the physical and virtualisation layer on which their services will sit. 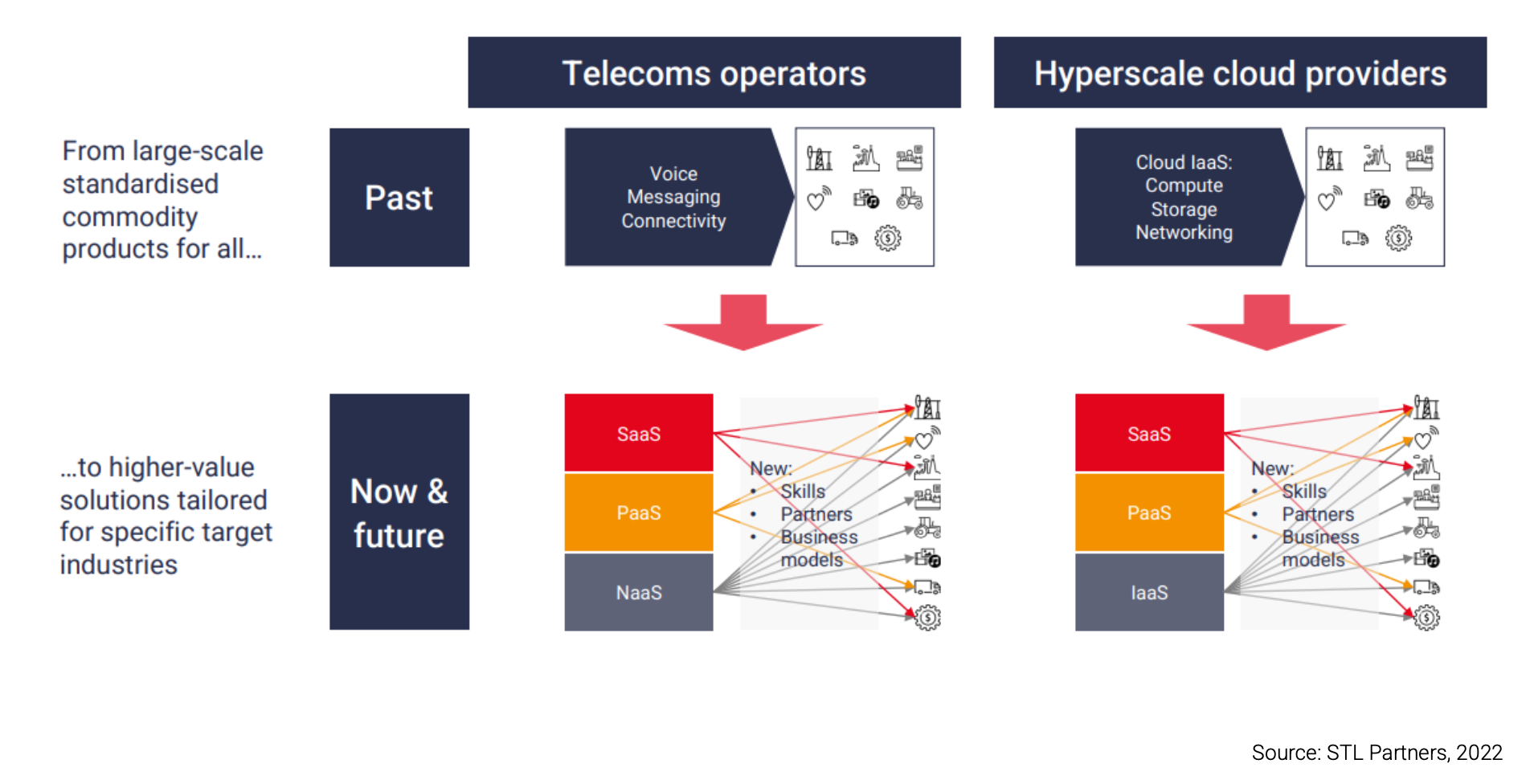 Broadly speaking, there are several potential benefits for telcos migrating their NFs to the public cloud:

Despite these benefits, telcos are still hesitant about moving their network workloads to the public cloud:

These worries are understandable, and hyperscalers do pose a challenge to telcos’ core connectivity business. But if telcos fail to capitalise on the cloud as a resource to evolve their services, other types of providers will take advantage of the opportunities instead.