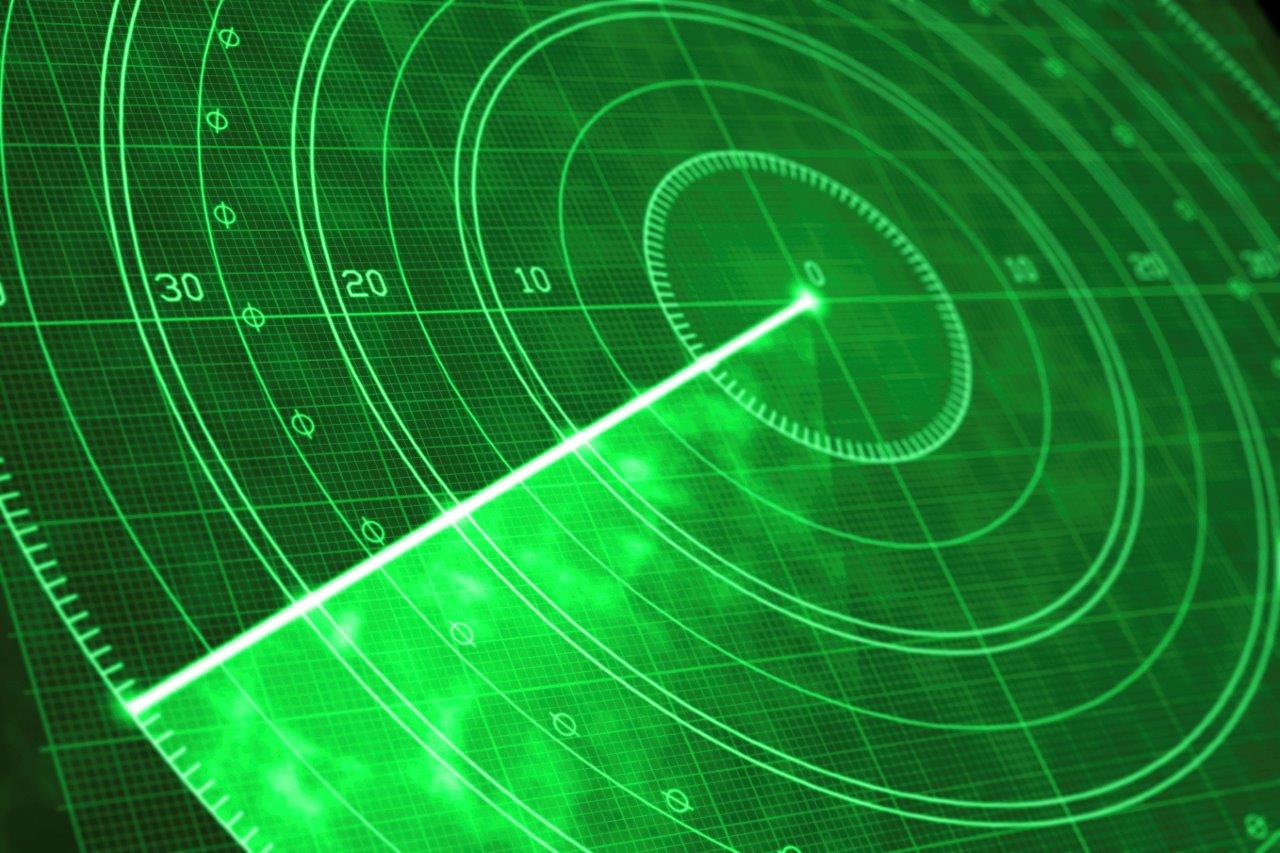 The US national wireless market is currently the most influential of its kind on the planet. Not only is it big, it is also rich, with significantly higher ARPUs than other developed markets. Not only is it big and rich, it is advanced, with much higher 4G penetration than comparable markets. Further, it has frequently acted as a bellwether for the world wireless industry. The iPhone’s success in the US marked the smartphone’s transition from pioneer to early-adopter status worldwide; the much greater success of the iPhone 3GS and the Moto Droid marked the beginning of mass adoption, and the crisis of the mid-market vendors.

On the network side, Verizon Wireless’s early decision to abandon the CDMA2000 development path and choose LTE FDD signalled the end of the standards wars and the beginning of serious 4G deployment, threw Motorola even deeper into crisis, and positioned Alcatel-Lucent as the leading vendor in the first wave of LTE rollouts.

The inclusion of the 1800MHz band in the iPhone 5, meanwhile, transformed the world’s spectrum picture, redefining this legacy GSM/PCS allocation as a key asset for smartphone-focused operators. Today, the combination of US wireless operators and US semiconductor vendors is transforming industry technology strategies again, as Verizon Wireless, AT&T, and Qualcomm lead the charge for a mobile broadband-focused “early” 5G.

Clearly, the US market is as critical for global mobile as the European market was in the pre-iPhone era. As a result, Telco 2.0 finds it useful to monitor it closely. We covered the changing 5G ecosystem in MWC: 5G and Wireless Networks  and How 5G is Disrupting Cloud and Network Strategy Today. We covered AT&T’s key role in driving NFV and open-source telco software forwards in Fast Pivot to the NFV Future, and the fate of worldwide 4G deployments in 4G Rollout Analysis: Winning Strategies and 5G Implications. This picked out one US carrier in particular for closer attention. In the adjacent industries, we covered Microsoft in Pivoting to a Communications-Focused Business, Amazon.com in Amazon Web Services: Colossal, but Invincible?, the cable operators in Gigabit Cable Attacks This Year, and the top-brand tech sector generally in Amazon, Apple, Facebook, Google, Netflix: Whose digital content is king?.

In this note, we will review developments in the US national wireless sector, both on a long-term basis since the launch of 4G, and on a tactical basis over the last 12 months, including analysis of the results from our new, unique Mobile Network Experience Index product .

The last five years in the US cellular market have been characterised by two forces – disruption, and growth. The arrival of smartphones comprehensively disrupted what had been a rather stagnant sector. Later, T-Mobile USA initiated a price disruption which resulted in a wave of consolidation and a significant drop in industrywide ARPU. However, despite the “uncarrier”’s price cuts, the total industry profit pool has nonetheless grown dramatically in that timeframe, from $8.7bn/quarter to $14bn/quarter, as the revenue base has grown by some 20%, or 4% per annum. 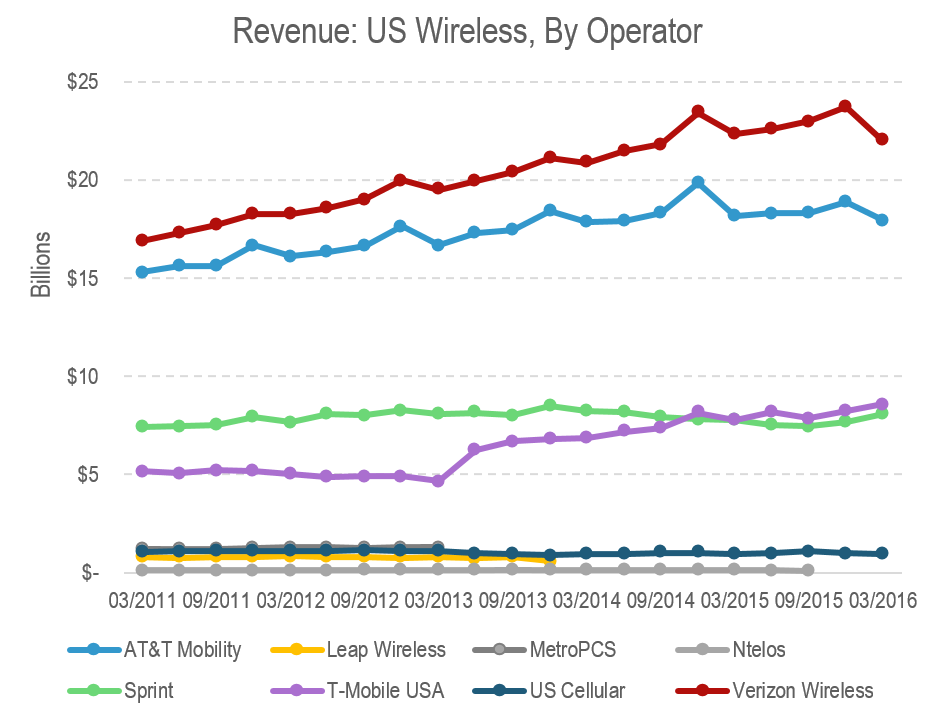 Growth was as characteristic of the US market over the last 5 years as price disruption. T-Mobile’s strategy was to a large extent possible because there was a significant degree of “blue-ocean” competition, enlarging the subscriber base and deepening its use of smartphones and high-speed data service, as well as consolidation of minor operators. We show the net impact on operating profits in Figure 2. 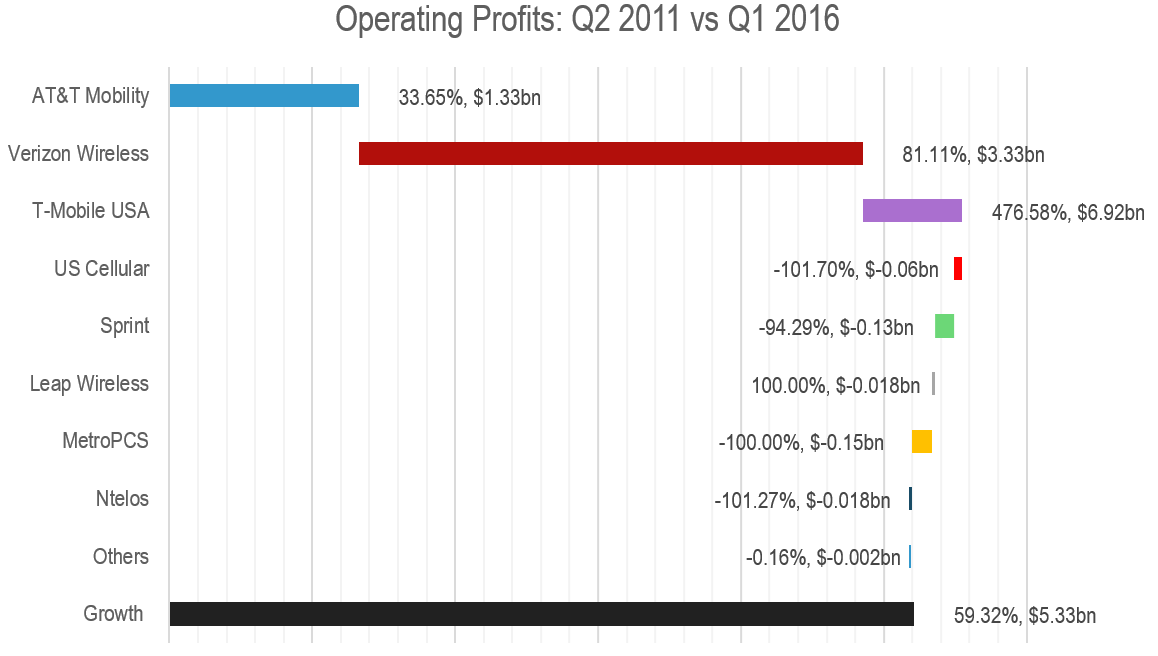 Over the whole timeframe, the total annual pool of operating profit available in the market has grown by 59% or 11.8% per annum, or five times as fast as US GDP. This came in the context of a 20%, or 4% annualised, increase in total wireless revenues. At the same time, three operators have benefited disproportionately from this growth – AT&T, Verizon Wireless, and T-Mobile. In fact, AT&T’s gains have been quite modest compared to the triumphs at VZW and T-Mobile.

On the other hand, Sprint has seen its operating profits halve and halve again, while Leap, MetroPCS, and numerous minor operators have exited the market. Looking at these data in a time-series view, as we do in Figure 3, we see that the duopoly is still a real force, although Verizon, has done distinctly better than AT&T.

Verizon Wireless, which pursued a “premium carrier” strategy based on going first with 4G, using its 700MHz holdings to maximise coverage and densifying with 1800MHz, and holding the line on price as long as possible, has clearly maximised its operating-level profitability. Meanwhile, a vicious struggle for third place was waged between T-Mobile and Sprint. Both parties struggled at times with the cost of spectrum acquisitions and network investments, and the gap between them and the duopoly is unmistakable. However, T-Mobile has managed to keep in the black since 2013 and its profitability is gradually improving, breaking away from the also-rans over the last 12 months.