A big hole to fill

Globally, Communication Service Providers (CSPs) or telcos are suffering significant declines in traditional service revenues such as Voice, Messaging and Data. We have covered these aspects extensively in some of our earlier reports such as ‘The Future Value of Voice and Messaging’, and the ‘Telco 2.0 Transformation Index’. These revenue declines are real and on a scale much larger than had previously been expected by much of the industry as evidenced by many of the recent earnings results.

These declines are due to technology, competition and socio economic changes that have forced changes in user behaviour. In our ‘Future of Voice and Messaging’ strategy report we forecast a potential decline of $172bn to 2018 across 9 markets we analysed. 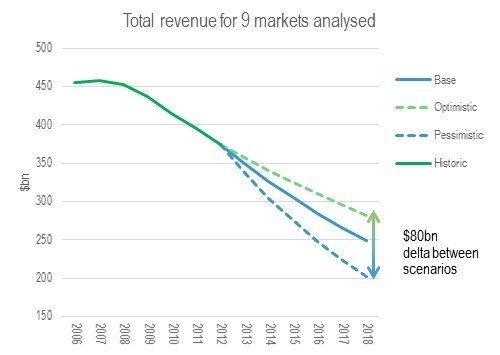 Source: STL Partners ‘The Future Value of Voice and Messaging‘

Data Services are not filling the gap fast enough as can be seen for example in Vodafone’s results from 2013 in Figure 3. 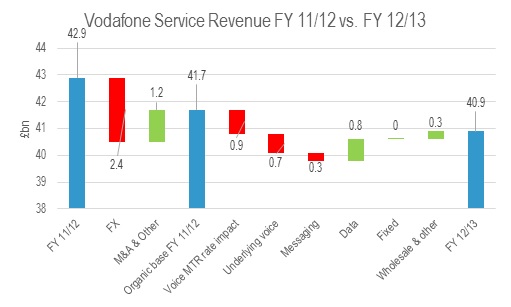 With voice and messaging revenues in decline (or approaching that stage) and data revenue unlikely to back-fill the enormous gap, telcos are looking for:

Could the Cloud be part of the answer?

The Cloud market is a growth market and in our ‘Telco Strategies in the Cloud’ report from 2013 we estimated that all aspects of the cloud market globally (excluding advertising) would be worth close to a trillion dollars by 2027. The market continues to transform, expand and reshape, but estimates from a variety of analysts suggest that overall, the cloud market continues to grow at around 30% CAGR. We thought that telcos could garner around 18% of the market by launching a variety of services and by partnering with leading cloud providers, and we estimate that current telco share is just below this level if you include a variety of services that can be described as cloud such as managed hosting and other similar services.

So, if you are a telco and looking for new markets and new opportunities, cloud services should in theory at least look like a strong contender. Cloud generally has a charging model very similar to existing telco business where services are charged for on an ‘as used’ basis. For example existing telco services are billed by things like the number of dialled minutes, number of SMS, and amount of data sent/received. Cloud is typically billed by the amount of disk space used, the CPU used, the number of users of a service etc. Both kinds of services are pay by use and both typically have a term or contract applied such as a 12 month or 24 month contract.

Service providers also have billing relationships with enterprise customers and many have strong channels that sell into the enterprise market. Another factor worth considering is that many CSPs have spare capacity in their data/networking hubs brought about by advances in networking technology requiring less rackspace, power and cooling. Cloud would seem to be a perfect solution for CSPs to help address declining revenues from elsewhere.

By 2015 the Cloud market will be roughly 9 years old and in the world of the Internet a relatively mature technology. From a strategic perspective it has been possible for at least 6 years to see where the clouds’ early successes would be, develop a strategy, launch products and take a share of the cloud market.

Today’s Tech and Web Giants like Google, Amazon, Microsoft and Apple have been heavily investing in Cloud since 2007 in order to build a presence in a variety of cloud services and to address a number of different business and consumer segments.

The combination of the market activity described above, the growth in cloud, and decline in core telco revenues might lead you to think that we would have seen some significant or innovative introductions from the telco community to take advantage of cloud services. After all, it is close to their existing business models, a growth industry and synergistic with existing service provider connectivity and voice services. This isn’t generally the case, although there are exceptions where some telcos have decided that Cloud should be part of their strategic future, and with the support of the leadership teams defined a long term strategy, established market entry and have launched or acquired cloud products and services. Some have even moved into the market, seen the goliaths enter their region and have diversified into unique and value add services that the global players cannot match.

Generically, cloud is commonly referred to by 3 segments, Software-as-a-Service (SaaS), Platform-as-a-Service (PaaS) and Infrastructure-as-a-Service (IaaS). We will not go into depth on the constituent components of each of the segments as we have covered this in our earlier reports. Below we take a look at each segment and the peculiarities of each segment along with service provider fit.

SaaS is a diverse market addressing different needs. From a customer segmentation perspective SaaS can provide services for consumers, students or enterprise users. For example Google Apps for Work is used by banks and large enterprises as well as small enterprises and consumers. And from a functionality point of view, SaaS can provide simple and economic access to CRM, ERP, Productivity (Collaboration, desktop suites etc.) and a growing number of products and services.

Specifically enterprise SaaS is a relatively high growth market and started around 1999 with vendors like Salesforce.com setting early market direction and building a dominant market share. Salesforce was followed by products like Google Mail and Google Docs. Microsoft then moved its office suite (BPOS and Office 365) to the cloud and many smaller vendors like Adobe followed suit with its Creative Cloud suite aimed at high end creative teams. There are a few smaller vendors like CRM.com and open source software like Open Office and ZoHo, but the SaaS market is generally dominated by the big global players who can leverage channel and a global presence to attract large volumes of customers. Microsoft and Google dominate with Google claiming over 5 million users and Microsoft recently announcing  it had over 7 million users.

SaaS products like desktop productivity suites are very specialised, with highly competitive markets, and not an area where we would expect telcos to be natural leaders. To be successful a company needs a brand focussed on the function or product, strong local and global markets, relevant channels to market, global support with a commitment to the long term growth. Looking at today’s major SaaS players, they have all of these things; global presence, global channels to market and have been leaders in their segment for some time or have a laser like focus on dominating the sector.

Many telcos are reselling SaaS products from the major vendors and combine or bundle their existing telco products with them. One clear example of synergy between SaaS and core telco offerings is a bundle of Office 365 from Microsoft with telco voice and connectivity. The type of solutions combine desktop productivity and ubiquitous connectivity as well as Unified communications combining fixed/mobile/desktop voice with Instant Messaging, presence (on a call or in a meeting for example), video and collaboration. Each employee has access to all functionality wherever they are and have an effective solution that can form the backbone of an enterprise mobility solution.

Telcos can be an excellent channel to the enterprise customer and can present a single billing/support point for all services. As far as telcos are concerned margins on SaaS products are generally lower than equivalent telco products as vendors such as Google and Microsoft generally offer 20% discount off of list price and then spice up the deal by offering a variety of incentives such as marketing support or bundles of products relevant to enterprise such lower cost Windows Mobile devices etc.

Bundling and Integration are two very good opportunities for telcos in this segment, by bundling or integrating with leading SaaS products, some telcos have seen up to 50% reduction in churn and over a 100% increase in ARPU from business users.

Telcos that have led this move are represented by organisations like Telstra, Verizon, Vodafone, AT&T, Elisa and others. It has been reported that Telstra is or was Microsoft’s largest global reseller of Office 365, with Vodafone close behind.

Platform as a Service is not as clearly defined or as well understood as the other two well-known cloud services, SaaS and IaaS. PaaS was originally aimed at developers who needed a development environment, perhaps a database and an application server plus the servers and networking hardware needed to make all this work, so to a certain extent, both a complete development environment and some IaaS. But over time, PaaS platforms have expanded to offer developers the ability to build, host and sell their applications as SaaS. Market leading implementations are services such as Microsoft Azure, Google App Engine Amazon Elastic Beanstalk and Salesforce’s Heroku.

Increasingly API’s to common services are being included and just like SaaS, it’s not a natural market for telcos to play in, they can contribute API’s and potentially monetise these API’s, but the general PaaS market is well outside a typical telco’s comfort zone. Specific channels and channel support mechanisms need to be developed and maintained, and while this may be possible for some that have existing ICT / SI operations, it is a complex undertaking requiring significant commitment, skills and resources.

Infrastructure-as-a-Service or IaaS is a very different scenario to SaaS and PaaS, it is much more familiar to a telco. The basic functionality can be seen as an extension to hosting/colocation services that some telcos have been offering to enterprise customers for quite some time, for example Orange Business Services Verizon, Colt, Cable & Wireless, BT Global Services, AT&T etc.

Colocation usually refers to the provision of rackspace for servers and includes things like cooling, power, rack space, Local Area Network connections and typically wide area bandwidth for the customer to connect to the data centre. With colocation (or colo as it is sometimes called), the customer usually provides the server hardware and software and manages this remotely. Hosting usually extends the colo capability to include the provision of the server hardware. The customer still owns the software licenses and usually manages the system, although managed hosting as a service is also available from a number of service providers.

Hosting enterprise applications and services has developed as an extension of core telco services with telcos able to bundle connectivity & voice with a variety of hosting options including functions such as Contact Centres, PBX’s and Data hosting. Low internal costs on connectivity and voice services have meant that for a telco the cost of communications has not inhibited the provision of a hosted service. If twice the bandwidth was needed to deliver the same performance from a hosted solution as a customer owned in-house solution, the marginal cost of the additional bandwidth is not an inhibitor to providing the service.

The advent of virtualisation services has meant that many telcos can lower the cost of delivering hosting as long as its customer are happy to move to a multi-tenant or a dedicated but virtualised platform.

Add to this the fact that telcos have spare data centre capacity and own much of the fibre and networking assets needed to connect data centres as well as customers and IaaS would seem to be a natural evolution for the majority of telco providers.

But like SaaS, the global market for IaaS has become dominated by a few significant players, notably, Amazon, Google and Microsoft. But why aren’t we seeing telcos as leaders in IaaS market?

While we can see that IaaS could be an extension of existing businesses or an upgrade to some existing colocation/hosting services offered by telcos, investing in pureplay IaaS requires a number of skills and assets that telcos do not necessarily possess: