Improving engagement has many benefits for an operator. It can help change customers’ perceptions which in turn can reduce churn and increase customer acquisition as well as opening up new avenues for telcos to offer additional services.

In this note, we analyse the opportunity for mobile operators within a new control point in the digital ecosystem – the ‘launcher’ application for Android devices. We present an overview of the opportunity, assessing what the product is and what’s at stake as well as providing an overview of the key players in this space. The report then focuses on how telcos may choose to play in this area, analysing the different strategies and their suitability to different types of operators.

Telcos’ engagement with and knowledge of their customers has been marginalized in the smartphone world. Whilst telcos still understand how customers use the traditional components of their mobile device (voice calls; messaging; data usage), the main digital disruptors now determine how users primarily engage with their devices – they control:

For more analysis on how telcos can understand and deal with these disruptors please read Telco 2.0’s analysis on this topic (Digital Commerce 2.0: Disrupting the Californian Giants [Oct 2013]; Dealing with the ‘Disruptors’ [Nov 2011]).

Engagement in the digital ecosystem is clearly worth a significant amount of money, both in terms of direct revenue as well as the indirect revenue associated with additional customer insight and knowledge. The valuations of companies such as Facebook and WhatsApp show the value premium that user engagement attracts. As mobile devices become even more prevalent and important in consumers’ lives, this engagement will become even more valuable.

In order for telcos to capitalize on this, they need to change their engagement strategy and gain more visibility and understanding of their customers. The industry largely understands this concept and a number or attempts have been made by telcos to wrestle back control of the device. Operators with bold ambitions have tried to compete head on, offering competing platforms to the OTT players (e.g. Vodafone 360) whilst others have attempted to position themselves within a segment of the digital ecosystem. Despite best efforts, these initiatives have so far met with mixed success.

One new area of opportunity for those looking to regain relevance on the mobile device (and one that is proving very popular right now) is the Android launcher.

What is a launcher?

A launcher is a customizable home screen for your Android device. It allows a user to arrange their apps in more creative ways, resulting in a more personalized, engaging mobile experience.

Launchers can range from sophisticated 3D menus, to themed displays, to simplified app categorization/ grouping. For example, Yahoo’s Aviate launcher changes the apps it displays based on the time of day and the location of the user (e.g. at work, on the go, at home) – meaning that the user can more easily access the right apps to match their current situation.

Figure 1: Popular launchers in the marketplace 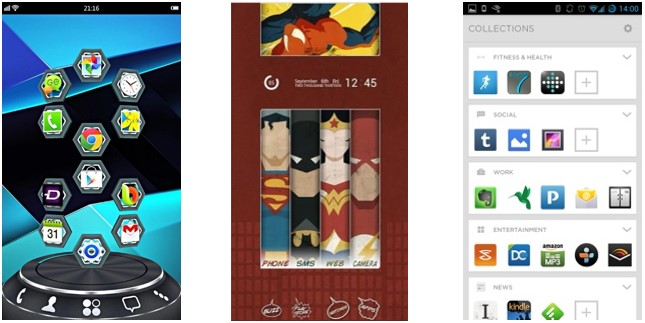 Launchers are more than just new ‘skins’ for the device. They alter how users interact with their device through app organization as well as through additional tools & services, including:

This combination of customizable app organization and easily accessible additional services is proving to be a compelling proposition for Android users.

Will launchers really take off?

The concept of a customizable home screen is not new but with advancements in smartphone operating systems and device displays this customization is starting to take off. A recent report by Flurry found that there were over 4,500 of these launcher-type apps and that launcher usage in Q1 2014 was greater than the total for all of 2013. 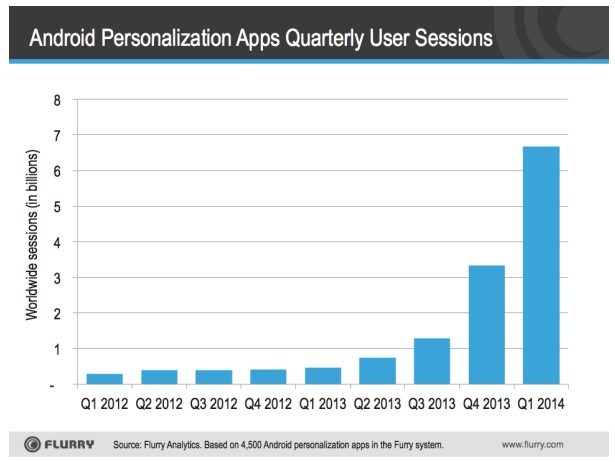 The evidence shows that launchers are beginning to take off. They are offering value to the customer, through customization and additional services, as well as providing a new tool for companies to engage with and understand the behavior of the user.

Launchers represent a new control point in the digital ecosystem, shaping how (and potentially what) information is presented to the user. Gaining insight into how a customer uses their phone combined with a contextual understanding of their situation has the potential to create significant value.

Different launcher applications provide different functionality, with some focusing more on themes and customization and others focusing more on developing customer insight to simplify display and discovery on the mobile device. These models have different methods of monetization, including:

Of these models and monetization methods we believe contextual search and discovery are the most interesting. Mobile has revolutionized how people find information and use digital services – however, mobile usage is built around apps (86% of time spent on mobile devices is spent inside applications – Source: Techcrunch). The difficulty with (discovering) apps is that they are largely standalone services – they cannot be crawled or indexed easily and there is little cross-app integration. This makes relevant apps (and the content within them) harder to find through search alone.

Launchers can attempt to organize apps in a similar way that search engines organize the web, providing a more user-friendly app discovery mechanism. Launchers can gain significant insight into user behaviour (e.g. the type of apps downloaded and time spent using apps) – this information can be used to recommend apps and other content and services to the user in an integrated way, allowing launchers to circumvent search within app portals and to make recommendations (for apps and content) to a user when they have demonstrated a preference for it. Indeed, EverythingMe, an innovative launcher company, have suggested that “users are searching less and less, but still expect results and discovery. We felt the best solution would be a contextual search product in the form of an Android launcher.”

As the mobile device becomes more important and central to the user’s life, controlling this interface and engagement has the potential to generate very valuable insight. This personalized discovery tool, as long it remains transparent and offers a tangible benefit to the customer, could revolutionize how value is derived from mobile applications.

This potential opportunity has not gone unnoticed with a number of the big digital players recently entering this space. However, as this technology and engagement strategy is in its infancy, no-one has taken a clear lead in the race.

Facebook, in April of last year, released Facebook Home, a launcher dedicated to putting social communication above all other applications on the mobile device (through cover feed, always-on chat heads and improved notifications). Despite a lot of initial fanfare, its performance has not been overly strong (only 0.5% of Facebook’s 1 billion monthly active users have installed it and it has received negative user feedback). Notwithstanding this slow start the company still sees this platform as a critical opportunity, with Facebook’s engineering Director, Jocelyn Goldfein, saying earlier this year in an interview with Venturebeat, “we’re still very bullish on Home…we’re believers in Home; we believe it’s going to be valuable for users”. Facebook’s continued resilience and flexibility when adapting to mobile could lead to a redesigned launcher that (social media) users’ value.

We believe that the relative failure of Facebook Home shows an important lesson for would be Launcher owners: the goal should be to optimize the customer experience and not maximize the placement of services for your own or others’ brands. After all, who wants the first screen on their phone to be in someone else’s control? This represents an opportunity for telcos, who don’t necessarily have the imperative to dominate the home screen with ads or today’s feed, and can therefore entertain a more intuitive and customer-oriented design. [NB It is also important that telcos attempt to learn from their own past errors: the ‘walled garden’ is not a successful model for most.]

For a more detailed assessment of Facebook Home’s service please see Facebook Home: what is the impact? [April 2013]