Members can download a PDF of this Note here.

The enterprise is the key field for new forms of voice and messaging; it’s where the social and economic value of bits exceeds their quantity by the greatest margin, and where the problems of bad voice & messaging are most severe.

People spend hours answering phone calls and typing information into computers – calls they take from people sitting behind computers that are internetworked with the ones they sit behind. Quite often, the answer is to send the caller on to someone else. Meanwhile, other people struggle to avoid calls from enterprises. 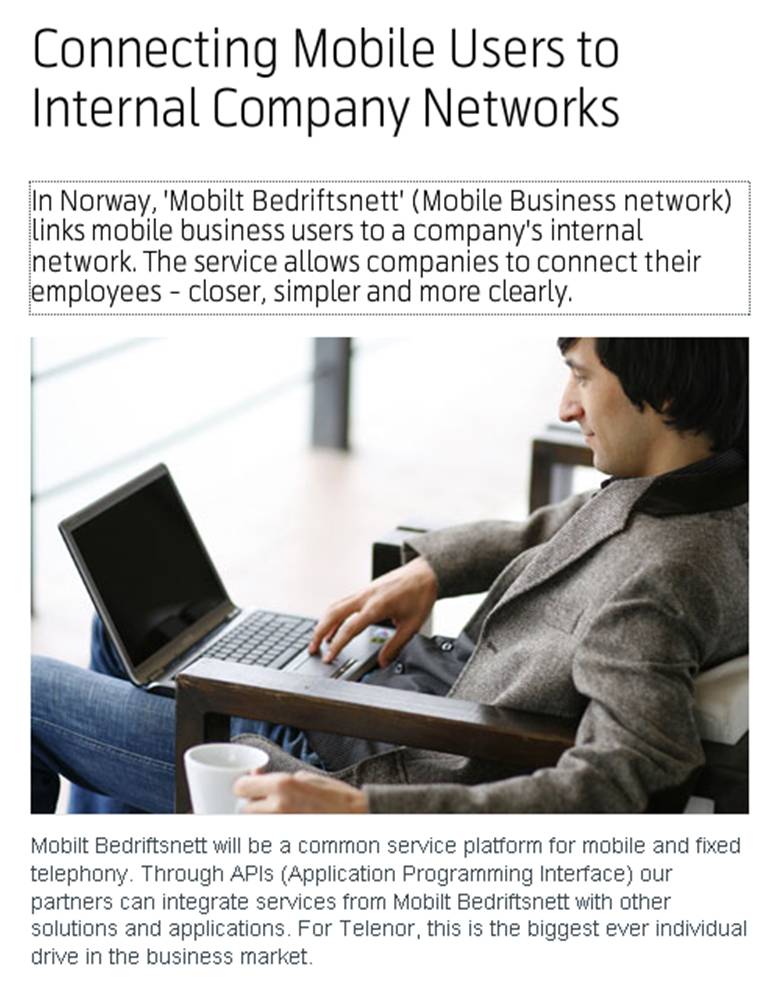 It’s got to change, and here’s a start: Mobilt Bedriftsnett or the ‘Mobile Business Network’ from Telenor.

Telenor are a large, Norwegian integrated telecoms operator, and a pioneer and early adopter of some Telco 2.0 ideas. As long ago as 2001, their head of strategy Lars Godell, was working on an early implementation of some of the ideas we’ve been promoting. They also have an active ‘Telenor 2.0′ strategic transformation programme.

Content Provider Access – CPA – established a standard interface for the ingestion, delivery, billing, and settlement of mobile content of any description that would be delivered to Telenor subscribers, and was the first service of this kind to share revenue from content sales with third parties and to interwork with other mobile and fixed line operators, years before the iPhone or even NTT’s pioneering i-Mode. Later, they added a developer sandbox (Playground) as well.

So, what would they do when they encountered the need for better voice & messaging? The importance of this line of business, and its focus on enterprises, has been part and parcel of Telco 2.0 since its inception (here’s a note on “digital workers” from the spring of 2007, and another on better telephony from the same period), and we’ve only become more convinced of its importance as a wave of disruptive innovators have entered the field.

We spoke to Telenor’s product manager for charging APIs, Elisabeth Falck, and strategy director Frank Elter; they think MB is “our latest move towards Telco 2.0”.

Voice 2.0: despite the changing value proposition…

In the Voice & Messaging 2.0 strategy report, we identified a fundamental shift in the value proposition of telephony; in the past, telephony was scarce relative to labour. That stopped being true between 1986 and 2001 in the US, when the price per minute of telephony fell below that of people’s time (the exact crossover points are 1986 for unskilled workers and landline calls, 1998 for graduates and mobile calls, and finally 2001 for unskilled workers and mobile calls).

Now, telephony is relatively plentiful; this is why there are now call-centre help desks and repair centres rather than service engineers and local repair shops. It’s no longer worth employing workers to avoid telephone calls; rather, it’s worth delivering services to the customer by phone rather than having a field sales or service force. The chart below visualises this relationship. 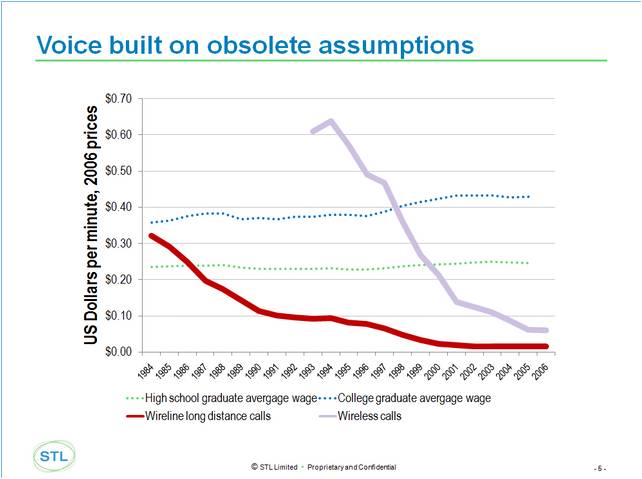 …and changing position in the value chain…

We also identified two other major trends in voice – commoditisation and fragmentation.

Voice is increasingly commoditised – that is to say, it’s a bulk product, cheap, and largely homeogenous. These are also the classic conditions of a product in perfect competition; despite the name and the ideological baggage, this isn’t a good thing, as in this situation economic theory predicts that profit margins will be competed away down to the absolute minimum required to keep the participants from giving up.

The provision of Voice is also increasingly fragmented and diverse – there are more and more producers, and more and more different applications, networks, and hardware devices incorporate some form of telephony. For example, games consoles like the Xbox have a voice chat capability, and CRM systems like Salesforce.com can be integrated with click-to-call services.

As a result, there’s less and less value in the telephone call itself – the period between the ringing tone and the click, when the circuit is established and bearer traffic is flowing. This bit is now cheap or free, and although Skype hasn’t eaten the world as it seemed it might in 2005, this is largely because the industry has reacted by bundling – i.e. slashing prices. Of course, neither the disruptors nor the traditional telcos can base a business on a permanent price war – eventually, prices go to zero. We’ve seen the results of this; several VoIP carriers whose business was based on offering the same features as the PSTN, but cheaper, have already gone under.

The outlook of Telco 2.0 Executive Brainstorm delegates as far back as 2007 demonstrates the widespread acceptance of these trends in the industry, and the increasing proliferation of diverse means of delivery of voice as show in the following chart. 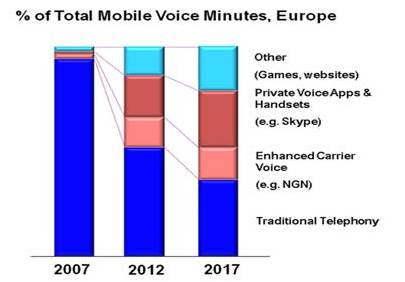 … Voice is still the biggest game in Telcotown…

So why bother with voice? The short answer is that there are three communications products the public gladly pays for – voice, SMS, and IP access.

Telenor’s CPA, one of the most successful and longest-running mobile content plays, is proud of $100m in revenues. In comparison, the business voice market in Norway is NOK6.9bn – $1.22bn. Even in 10 years’ time, voice will comprise the bulk of Telco revenue streams. However grim the prospects, defending Voice is only optional in the sense that survival is optional.

Moreover the emergence of the first wave of internet voice players – Skype, Vonage, etc., and the subsequent fight back by Operators, demonstrates that there is still much scope for innovation in voice and messaging, and that the option of better voice and messaging is still open.

…although the rules are changing…

Specifically, the possible zone of value is now adjacent to the call – features like presence-and-availability, dynamic call routing, speech-to-text, collaboration, history, and integration with the field of CEBP (Communications-Enabled Business Processes). There may also be some scope for improving the bearer quality – HD voice is currently gaining buzz – although the challenge there is that the Internet Players can use better voice codecs as well (Skype already does).

…and the Enterprise market is where the smart money is

The crucial market for better voice & messaging is the enterprise, because that’s where the money is. Nowhere else does the economic value of bits exceed their quantity and cost so much.

For large enterprises, the answer will almost certainly come from custom developments. They are already extensive users of VoIP internally, and increasingly externally as well. They tend to have large customised IT and unified communications installations, and the money and infrastructure to either do their own development or hire software/systems integration firms to do it for them. The appropriate telco play is something like BT Global Services – the systems integration/managed services wing of BT.

But using the toolkit of Voice 2.0 is technically challenging. It’s been said that free software is usually only free if you value your time at zero; small and medium-sized businesses can never afford to do that.

Mobilt Bedriftsnett (MB) is Telenor’s response to this situation, aimed at Small and Medium Enterprises (SMEs). Its primary benefit is to improve business efficiency by extending the functions of an internal PBX and/or unified communications system to include all the companies’ mobile phones.

Telenor’s internal business modelling estimates the cost of CRM failures – missed appointments, rework of mistakes, complaints, lost sales – to a potential SME customer at between $500 and $2,000 a year. This is the economic ‘friction’ that the product is designed to address. 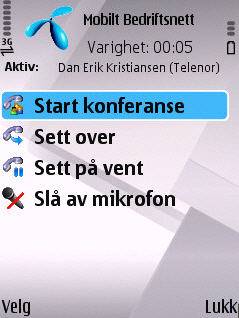 The Core Product is based on Telenor APIs…

The product is based on a suite of APIs into Telenor infrastructure, one of which replicates a hosted IP-PBX, i.e. IP Centrex, solution. It’s aimed at SMEs, and in particular, at integrating with their existing PBX, unified communications, and CRM installations. There’s a browser-based end user interface, which lets nontechnical customers manage their services.

There is also considerable scope for further development, and MB also provides four other APIs, which provide a click-to-call capability, bulk or programmatic SMS, location information, and “Status Push”. This last one provides information on whether a user is currently in coverage, power level, bandwidth, etc, and will be extended to carry presence-and-availability information and integrate with groupware and CRM systems in Q1 2010.

Extensive work has been carried out with PBX/UC vendors, notably Alcatel-Lucent and Microsoft, to ensure integration. For example, one of the current use cases for the click-to-call API permits a user to launch a conference call from within MS Outlook or a CRM application. The voice switch receives an event from the SOAP API, initiates a call to the user’s mobile device, then bridges in the target number.

MB is also the gateway to a business-focused app store, which markets the work of third-party software developers using the MB API to their base of SME customers. This element qualifies it as a two-sided business model. Telenor is thereby facilitating trade that wouldn’t otherwise occur, by sharing revenue from its customers with upstream producers and also by bringing SMEs that might not otherwise attract any interest from the developer community into contact with it. Developers either pay per use or receive a 70% revenue share depending on the APIs in use.

Telenor are using the existing infrastructure created for CPA to pay out the revenue share and carry out the digital logistics, and targeting the developer community they’re already building under their iLabs project. So far, third-party applications include integration with Microsoft’s Office Communication Server line of products, integration with Alcatel-Lucent and some other proprietary IP-PBXs, and a mobile-based CRM solution, WebOfficeOne.

In a twist on the two-sided business model, MB services are primarily marketed to systems integrators, independent software developers, and CRM and IP telephony vendors, who act as a channel to market for core Telenor products such as voice, messaging, presence & availability, and location. This differs quite sharply from their experience with CPA, whose business is dominated by content providers.

Pricing is based on a freemium model; some API usage is free, businesses that choose to use the CPA payments system pay through the revenue sharing mechanism, and ones that don’t but do use the APIs heavily pay by usage. 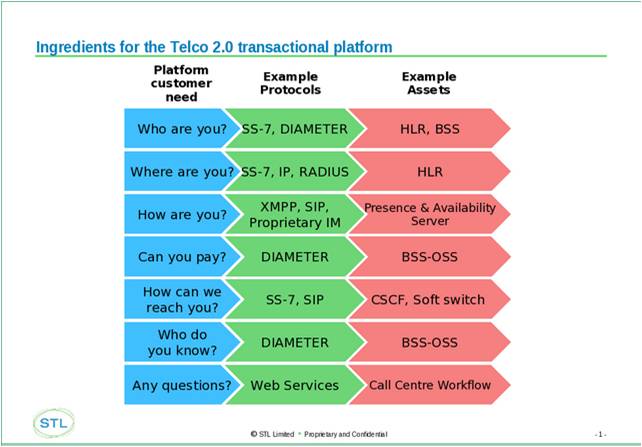 Telenor’s API layer consists of Simple Object Access Protocol (SOAP) and Web service interfaces between the customer needs on the left of the diagram, and a bank of service gateways which communicate with various elements of in the core network on the right.

At the moment, the click-to-call and status push interfaces are implemented using the proprietary Computer-Support Telecoms Applications (CSTA) standard, in order to integrate more easily with the Alcatel-Lucent range of PBXs. So far, they don’t implement Parlay-X (or OneAPI as the GSMA calls it), but they intend to migrate to the standard in the future. Like Microsoft OCS, Asterisk, and much else, the industry standard IETF SIP is used for the core voice, messaging, and availability functions. 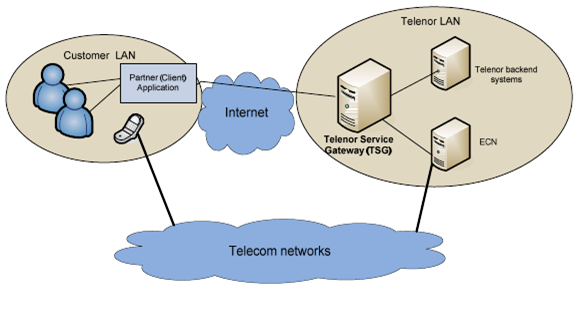 Telenor is unwilling to describe what it would consider to constitute success with Mobilt Bedriftsnett; however, they do say that they expect it to be a “great source of income”. MB has only been live since June 2009, and traffic to CPA inevitably dwarfs that to the MB APIs at present.

…and part of a bigger strategic plan

Mobilt Bedriftsnett makes up the Voice & Messaging 2.0 element of Telenor’s transformation towards Telco 2.0. The other components of ‘Telenor 2.0’ are:

With Mobilt Bedriftsnett, Telenor has carried on its tradition of pioneering Telco 2.0 style business model innovations, though it is relatively early to judge the success of the ‘Telenor 2.0′ strategy.

1)     They are taking serious steps to create and try ‘two-sided’ telecoms business models.

2)     The repeated mentions of CPA’s role in MB point to an important truth about Telco 2.0 – the elements of it are mutually supporting. It becomes dramatically easier to create a developer community, bill for sender-pays data, operate an app store, etc, if you already have an effective payments and revenue-sharing solution. Similarly, an effective identification/authorisation capability underlies billing and payments. Telenor understands and is acting on this network principle.