We are excited to be launching our new tool which tracks investments in the rapidly growing edge computing space. In this article we touch on some of the key investment trends we have seen over the past 12 months, as well as giving you a look at what you can expect from the tool.

We have been tracking investments in the edge computing space since the beginning of 2020, and we are now looking to bring this data and insights into the Edge Insights Service. We have produced two previous articles which have analysed trends in the market:

Access to the edge investments tracker will allow users to customise these insights to match their needs. The tracker allows you to see who is receiving investment and from whom. This free article serves as a taster of the content within the tracker. If you would like to find out more, please contact STL Partners at tim.otto@stlpartners.com.

We see it as predominantly bringing value to two different groups:

There is value for investors who are looking to or already invested in edge computing. The Edge ecosystem tool gives a unique perspective of the edge market and adding our investments tracker gives extra depth. Investors will be able to see where in the market the money is going and see trends emerging. It will also be instructive to see how many funding rounds are occurring in the edge computing world.

Having the ability to analyse companies and trends strictly in edge has great benefit, but subscribers will also gain access to our other edge resources. The Edge Insights Service contains multiple tools which will bring value to investors, including:

Paired with our Edge ecosystem tool, companies will be able to have a view of potential partners and their activity in the market. This may be new start-ups receiving seed investment looking for more mature partners to help them get-to-market, or larger partners who are further in their funding journey and are looking to expand their product portfolio.

It will also be useful for companies looking to enter new funding rounds. Our tool captures who are investing in these companies, whether this is venture capital arms of technology companies or venture capital funds focused on the TMT sector. This means companies can stay on top of which big investors are active in the edge computing space.

Edge computing is a nascent but fast-growing market and STL Partners’ Edge Insights Service will arm you with the tools you need to understand and glean value from it. The rest of this article will run through some high-level insights from the tracker.

Looking at our predictions from last year

In August 2021, we wrote an article looking at the trends in edge investments that we had observed since January 2020. In that article we made some predictions for the following year:

Since the start of Q3 2021, our tracker has captured $6.74bn worth of investment in edge computing signalling a real growth in overall investments. A large portion of this is driven by Aptiv’s $4.3bn acquisition of Wind River, but this still dwarves the roughly $3.75bn captured in the entire tool from Q1 2020 – Q2 2021.

The makeup of the overall investment amount is also starting to change as expected. Since the start of Q3 2021, there was only $226m of investment in Facility (please see last year’s article for detail on how we track investment in this segment), compared to over $1.6bn in the previous period. Application/software also continued to grow with over $5.2bn of investment in the period, compared to roughly $500m in the preceding period. Venture capital funds also continued to dominate the space, with 80% of transactions in the period Q3 2021 – Sept. 2022 being executed by them.

Figure 1: Application/software dominated investment in edge computing in the past year 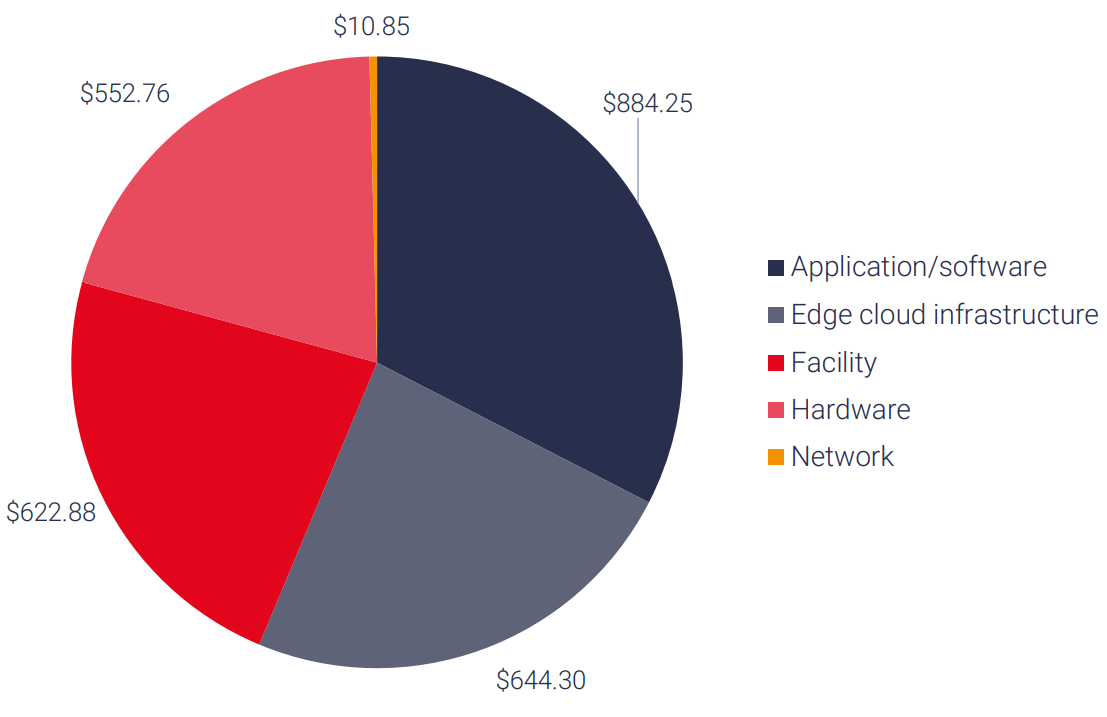 Investment in Application/software is maturing

Application/software is the value chain segment with the most activity in the past year and has now become the segment which has seen the most investment over our whole tracking period (January 2020 onwards). Consistent with our previous updates, the segment is predominantly seeing this investment in the form of Venture Rounds. This ranges from a $1m pre-seed raise by decentralised monetisation platform Rainfall, to a $235m Series C raise for AI-based facial recognition company AnyVision. What is most notable is that the average transaction size has increased massively to roughly $180m for the 29 transactions in the period, from $45.05m in our last article. This is massively driven by a handful of large transactions including AnyVision’s Series C and Wind River’s acquisition, but also including 5 other transactions over $50m and 1 $150m transaction (a series C raise for Computer Vision fleet management solution provider Netradyne).

That said, we are not yet seeing investment from Private Equity funds. This is an indicator that whilst the Application/software segment is growing, it is still very much in its nascency. We would expect to see further large transactions over the next year as more edge companies get closer to realising their revenue potential. Some of those firms which entered early funding rounds when we began tracking in Q1 2020 will be those who see increased transaction sizes in the next couple of years.

What to expect next?

Over the coming months, we will be updating our tracker and developing analysis tools to empower investors and edge start-ups. Though the expected global economic downturn will have an inevitable impact on investment activity within edge computing and digital infrastructure, the simultaneous demand for greater automation and movement to an OPEX model will drive the maturation of the ecosystem and its key stakeholders. Central to this development is the capital that investment organisations provide to allow this ecosystem to develop and deploy commercial solutions.

To find out more, email us at tim.otto@stlpartners.com