Breaking up is always hard to do, but there are some things that make it easier. In this case, the partners’ interests have drifted apart, there are no kids, and the financial settlement looks like a reasonably good deal for everyone. Vodafone wants the funds for a mixture of transformation and diversification in Europe and other markets; Verizon wants to consolidate using the control and cash flow of Verizon Wireless (VZW), and is betting big on the continued growth of mobile in the US market.

But will they both be better off after the split?

In the third largest corporate transaction in history, it was announced on Monday 2nd September 2013 that Vodafone has sold its 45% stake in Verizon Wireless to Verizon Communications for $130bn.

This has been a long time coming. In 2004, there was the AT&T affair, when Verizon almost succeeded in buying out Vodafone’s stake in Verizon Wireless. Vodafone had agreed to sell VZW should it win a bid for AT&T Wireless, but this (and therefore the original deal) fell through. Autumn 2012 saw talk of marriage – discussions of a full-blown merger, but Verizon got cold feet over Europe’s prospects. In April of this year Verizon was contemplating a $100bn bid, but Vodafone’s advisers said this was an undervaluation – with the true value closer to $120bn. It was not until this summer’s anticipated interest rate hikes and a falling stock price that Verizon “finally got serious about paying a full price”, as Vittorio Colao (CEO of Vodafone) put it. 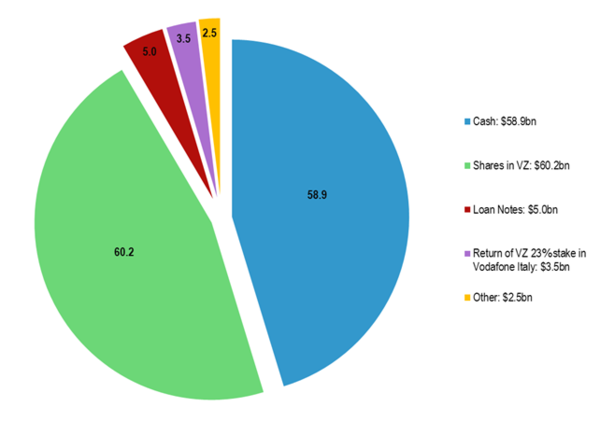 Figure 1: The deal broken down, $ Billions

Of particular note is the sheer level of debt Verizon has agreed to take on: it has raised $61bn via a bridge loan, which is split roughly 50/50 between bank and public bonds – making it the largest bridge loan in history. So Verizon certainly cannot be accused of a lack of commitment to gaining ownership of VZW given the level of debt it is prepared to take on to remove Vodafone’s name from the register. As part of the sort-out of the couple’s record collection, Verizon has also returned its 23% stake in Vodafone Italy.

Vodafone has announced that it will return all of the shares and $23.9bn in cash directly to shareholders, which equates to an overall $84.1bn or 65% of the total consideration. This should make its shareholders happy in the near term at least. Indeed in many ways, Voda’s shareholders are the biggest clear winners, benefiting from a better valuation than the stock market had placed on the VZW stake, including some in cash and some in Verizon shares so that they can carry on their relationships with Verizon if they want to.

This may be a key lesson for CSPs holding minority strategic stakes in quoted groups: sell out when you can get the best valuation, and above all keep the shareholders happy.

Although impressive in its scale, this must not overshadow a more basic question: what does this all mean for Verizon and Vodafone?

Verizon: betting big on continued growth of the US wireless market

In its presentation to investors, Verizon identified two key strategic benefits of the deal: access to all of Verizon Wireless’ cash flows and the US wireless marketplace being in a growth phase. These tell an interesting story of the rationale behind (and prospects for) the deal.

Verizon Wireless is the ‘superstar’ operating segment of Verizon. It has enjoyed year-on-year revenue growth since 2010 at an annualised rate of 9.4%, whilst its other operating segment, Wireline, has contracted year-on-year at an annualised rate of 1.8%. Unsurprisingly, Verizon would have had access to an additional $5.3bn in free cash flow in 2012 – had it owned all of Verizon Wireless.

Although cash-augmenting in the long run, Verizon has leveraged itself heavily in the short run. Its borrowing of over $60bn to fund the deal will lead to a large increase in interest payments which, for the near future, will crowd out funds available for capital expenditure. Verizon will also need to allocate most of this cash to paying down the debt in the short term should it wish to return to a more normal debt level. Its step-change in leverage is demonstrated by STL Partners’ analysis of Net Debt/EBITDA before and after the deal. 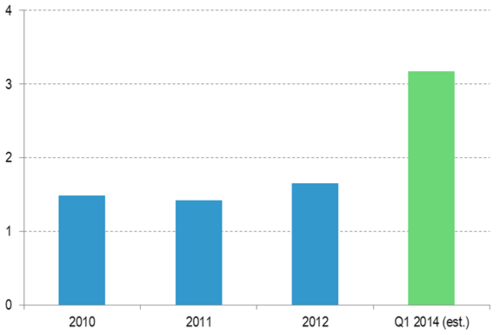 This will have the worrisome effect of leaving Verizon more vulnerable to shifts in the US wireless landscape. With such a stretched balance sheet it is not preparing for strategic investment should the need arise.

Risks include disruption from Sprint Mobile after its merger with SoftBank, intensifying competition from OTT players in voice and messaging, and a slowing of US wireless growth. Indeed, the IMF, for example, recently revised downwards its growth forecast for the US economy. Any of these or other disruptive events might leave Verizon needing to spend without the means.

Verizon has therefore made a $130bn bet on status quo in the US wireless industry. It has made itself larger but also less manoeuvrable. In one sense this is conservative, since it is ‘sticking to its knitting’ and has not invested in non-core revenue sources, but the sustainability of growth in core services – and therefore the ability of these to make the deal self-financing – is uncertain, and the highly leveraged bet is not without risk.

Although Vodafone remains either the largest or second-largest operator in eight of its nine Western European markets, its prospects have soured in recent years. Service revenue might have grown 0.3% during FY2011/12, but it then fell 4.5% during FY2012/13, and this has been compounded further by a quarterly fall of 3.5% in their most recent release. It is also facing increasing competition from cable companies offering bundled packages in many of their core markets.

It is therefore of little surprise that Vodafone has chosen now to sell its stake in Verizon Wireless. With a ‘war chest’ to both pay down much of its debt and expand its offerings in core services, Vodafone hopes to reverse – or at least stop – this turning tide. By contrast with Verizon, therefore, the deal makes Vodafone financially more manoeuvrable. Colao told reporters that the deal will “enable the company to be very robust and take opportunities if they arise.” He might be “super committed” to the next chapter in Vodafone’s development, but how will this chapter read?

One clue lies in Vodafone’s announcement of ‘Project Spring’, a $9.4bn organic investment programme over the next three years to build out and modernise their core services – particularly 4G LTE and fibre. This is significant: FY2012/13 saw capital expenditure of $9.8bn. So, assuming that ‘base’ capital expenditure remains unchanged and that Project Spring is spread equally over the next three years, it represents a yearly increase in capex of 32%. Ironically, by separating itself from Verizon it is now able to adopt an aggressive network-expansion programme reminiscent of Verizon’s own during the last few years.

The following is a breakdown taken from its investor presentation. 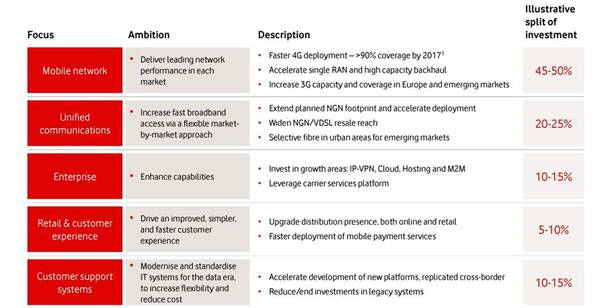 Though substantial, the question remains whether Project Spring is sufficient to change Vodafone’s fortunes. In the long run, Vodafone will also have less in the way of interest expenses which should enable it to look beyond organic investment: it intends to use some of Verizon’s cash to help pay for its takeover of Kabel Deutschland and, once this deal has completed, expects to have reduced net debt to approximately 1.0× EBITDA. Vodafone could look to pursue further in-market inorganic investment or even expand its footprint in emerging markets. Given the discouraging prospects for much of Europe – the IMF has also revised downwards its growth forecast for the Euro Area – investment in non-core services or emerging markets appears increasingly necessary.

There is of course the question of the value that Vodafone is now choosing to give up: the significant growth it has received from VZW. We imagine that Vodafone’s internal views of growth prospects in the US wireless market are not as positive as Verizon’s. But since the days of the pin-stripe suited and red-braced Chris ‘City’ Gent, Vodafone has long had a reputation as a shrewd financial operator, and given the valuation they have extracted from Verizon, we doubt they let this colour the negotiations.

Indeed, a difference of opinion over such matters, however much it was communicated during negotiations, is likely to have been a driver of the timing of the decision. When shareholders start to hold diverging views of this nature it can often be a good sign that the time is coming to part ways, as it is difficult to operate together effectively strategically and commercially with such differences.

So in summary, we think Vodafone has struck a good deal, although despite the clear benefits of the injection of funds it will receive, Vodafone’s prospects after the deal are also not without risk. It has given itself the opportunity to expand and diversify its offerings in both core and non-core services and markets, but the question of how it chooses to use this opportunity remains.

As with Verizon and the USA, the prospects of Europe and the emerging markets will play a substantial role in determining the return on Vodafone’s investment – and whether it was right to return its stake in Verizon Wireless. However, Vodafone has more of its destiny in its own hands than Verizon, as it has new money to invest, and neither its existing nor potential new assets are tied to the prospects of just one marketplace.

The cynical old joke runs as follows: “Why is divorce so expensive? Because it’s worth it.” For Vodafone and Verizon, the ultimate worth of this split will depend on what they do, and what else happens next. As with the aftermath of any split, we’ll be watching with interest to see who is back in the market first.