STL Partners and the Telco 2.0 team are not naturally boastful people. From time to time though, we make predictions based on our views and insights. This is a risky business as forecasting the future is full of pitfalls. As a professional organisation it takes a bit of guts to put our name to predictions in public so we’re pleased when we get it right.

In this vein, here are six predictions we’ve made in our Executive Briefing Service that have recently come true.

To find out how you and your company could get ahead of the game by working with us, please email us at contact@stlpartners.com. [NB We promise not to let this run of success go to our heads.]

AT&T Is Dumping A Ton Of Its Copper, Like We Said

AT&T has issued an official stock exchange filing in which it announced that a substantial chunk of its fixed network is now surplus to requirements:

Our fourth-quarter 2014 operating results will also include a $2.1 billion noncash charge for the abandonment in place of certain network assets. During the fourth quarter, we performed an analysis of our network assets and determined that specific copper assets will not be necessary to support future network activity, due to declining customer demand for our legacy voice and data products and the migration of our networks to next generation technology. This decision by management will not be considered in our assessment of segment performance and therefore, this charge will be reflected only in consolidated results and will not affect segment operating results or margins.

The wording (“abandonment in place”) suggests that they’re going to close some networks, rather than selling them, and provide service via fixed-wireless, or possibly overbuild them with fibre.

In our December 2014 Executive Briefing, Will AT&T shed copper, fibre-up, or buy more content – and what are the lessons?, we predicted that AT&T was likely to reduce its fixed footprint, whether by sales or closures, and concentrate on either “wireless, plus satellite TV” via the DirecTV deal, or else build FTTH into a smaller, more urban footprint.

We expect, however, that AT&T may consider a Verizon-like disposal of some DSL assets, perhaps coupled with the beginning of major FTTP rollout

However, we thought they wouldn’t get out of the business completely, not least because of its interdependence with their star Strategic Business Services product line. 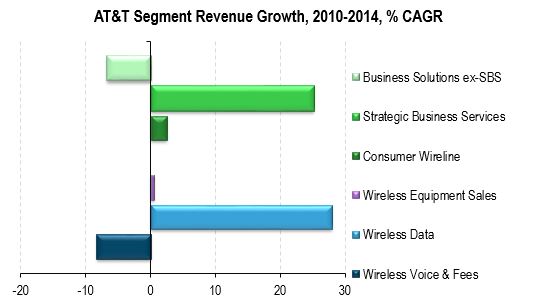 In August, 2014’s Connected Home: Telcos vs Google (Nest, Apple, Samsung…) Executive Briefing, we argued that Google would look to Europe first with the Nest acquisition:

Nest has focused to date on markets with tech-savvy/high-tech-spending consumers rather than those with relatively higher energy bills. In other words, it has recognised that the value proposition of connected home devices will be less well understood in the early stages of their lifecycle. Therefore, one must initially drive adoption by focusing on specific markets with the most tech-savvy/high-tech-spending consumers. As it matures, one can then look at expanding to markets with a compelling value proposition but less favourable CE spending. Nest’s inclusion of time zones and weather support for ten European countries in a January software update suggests that this will indeed be its next move. 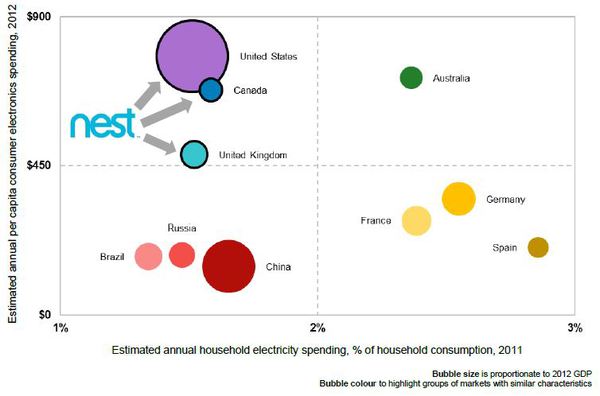 The month after publication, they launched in France, the Netherlands, Belgium, and Ireland. We expect Australia to be next.

Everyone Got All Excited About Free & T-Mobile, But We Weren’t Having It

In the same month, we predicted that the Free-T-Mobile deal wasn’t going to happen, in the Disruptive Revolution or a Bridge too Far? Executive Briefing.

Having characterised the Free Mobile package of technology, tactics, and procedures, we find that the crucial question is to what extent they are applicable to the US market. For various reasons, notably regulatory and to do with the fact that no fixed-mobile synergy is available with T-Mobile, we conclude that they are not and that there is little realistic opportunity for a pure leverage play, as CAPEX and spectrum acquisition calls on free cash are likely to continue at a high level for the foreseeable future.
A strategic deal with one or more cable operator is a possibility, reducing the financial strain of the deal and bringing substantial broadband assets into the mix. This would add complexity, and its success or otherwise would be very dependent on the cable operator’s ability to manage rapid software cycles in its set-top box fleet. However, such a deal is currently only a rumour.
We are concerned that the transaction is motivated by chagrin after the failure of more consolidation within France, as well as overselling by Free’s banking advisers and perhaps some political involvement. As historic supporters of Free.fr, we can’t recommend this deal.

The deal with the cablecos didn’t materialise, and Xavier Niel eventually walked away.

We Said “Uncarrier” T-Mobile Was Really Just A Discounter. DTAG Still Wants To Sell It

Earlier in the year, however, in the Disruptive Strategy: ‘Uncarrier’ T-Mobile vs. AT&T, VZW, and Free.fr Executive Briefing, we argued that the difference between Free Mobile and T-Mobile USA was that Free had a genuinely disruptive business model and technology strategy, whereas T-Mobile USA was a pure discounter.

In this note, we’ve reviewed events in the US national cellular market. We have also reviewed the Free Mobile market entry in France, and identified the signature of a Free-like disruption event. Specifically, we expect to see declining ARPU, significant renewed subscriber growth, a shakeout of MVNOs or minor operators, and an early approach to profitability on the part of the disruptor, this being the condition of sustained competition….we certainly do not see an early approach to profitability on the part of the disruptor. Despite T-Mobile’s claims that it is decoupling handsets from service, we find that in practice, far from implying a reduction in subsidy, this means a really epic giveaway to customers.
The question is therefore whether a disruptor – T-Mobile, a merged Sprint/T-Mobile, Sprint, or a new entrant – will be able to establish a viable business model (i.e. revenue and cost model) that permits them to compete on price rather than by losing money on each smartphone they ship 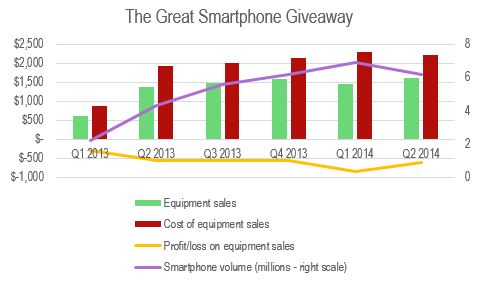 DTAG CEO Timotheus Höttges is still looking for a buyer. However, T-Mobile USA is over 90% fibre-to-the-cell, so we don’t think he’s in any hurry.

We Said There Would Be a US Cellular Price War, And It Totally Happened

Our January 2013 Sprint-Softbank: how it will disrupt the US market Executive Briefing stated explicitly that the US was heading for outright price war, that although Softbank’s bid for Sprint had been the tell, T-Mobile had beaten them to the punch, and that Sprint would struggle to cope:

We also expect that Sprint/Softbank will aim for the simplest form of disruption, price war….
In the short term, we expect they will launch a price disruption, trying to punch the duopoly before T-Mobile’s parent’s investment starts to flow. The problem here, though, is that the bear has blown first. T-Mobile USA has, since the Sprint-Softbank deal, secured access to the iPhone, announced a Softbank-like pay-for-devices-as-you-go policy, and tied up €4bn in funding from DTAG for its LTE rollout. If the Softbank example has any merit, and in the light of T-Mobile moving first, this will need a hero product to get the customers’ attention and to provide more stickiness than just a low-cost SIM-only offer like the ones T-Mobile has made a speciality of. 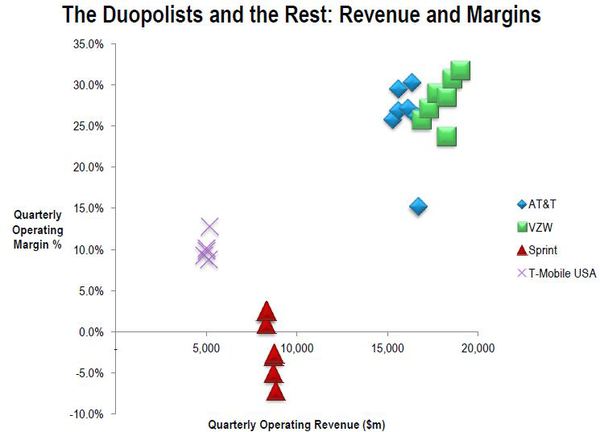 This One Is Cheating A Bit, But…

In our just-published BT/EE: Huge Regulatory Headache and Trigger for European Transformation, we predicted that BT’s bid for EE would probably trigger both consolidation and fixed-mobile convergence in the UK market.

The vertical integration between BT and EE would be likely to mean that other UK MNOs find it necessary to invest heavily in fixed assets, bringing about a cascading process of convergence and consolidation that could take the UK down to three converged operators…

Not only has 3UK started talks with O2, Sky wants an MVNO agreement and TalkTalk seems to be involved as well.