STL Partners conducted research through conversations with key stakeholders in both the satellites and telecoms industries. We held interviews with satellite vendors (e.g. manufacturers of satellites and ground equipment), satellite service providers (SSPs), and traditional mobile network operators (MNOs) to get a balanced understanding of attitudes across the wider ecosystem. In this article, we detail our findings on the impact of 5G and new entrants to the satellite market, and recommendations for SSPs going forward.

3GPP Release 16 brought the first standards to reference non-terrestrial networks, i.e., satellites including Low Earth Orbits (LEOs), Medium Earth Orbits (MEOs), Geostationary Earth Orbits (GEOs) and High Altitude Platform Station (HAPS); aircraft; airships and balloons. The 3GPP standard has put them at the centre of the discussion around 5G network convergence, focusing on providing a variety of different options for non-terrestrial networks (NTNs) in 5G. As a result of this, satellite players are largely optimistic that Release 16 will boost their profile with MNOs. Release 17 is expected to bring more clarity with NTNs, progressing from the study to the normative phase and exploring the technical details of implementing the scenarios outlined in Release 16.

As well as the new 5G standards raising the profile of the satellite industry, high-profile players with abundant resources have entered the satellite market and are now disrupting it, drawing further attention to the industry. These new entrants are publicly stating intentions to focus on the consumer broadband market but are also starting to build out their networks to support internal business cases such as logistics for Amazon and connected cars for SpaceX. They are also targeting remote and underserved geographical areas which have typically been served by existing satellite service providers. Launching Low Earth Orbits does present new entrants with challenges. Although they are cheaper than Medium Earth Orbits and Geostationary Earth Orbits, Low Earth Orbits require higher number of satellites to provide effective coverage and they have a fairly short lifetime (5-6 years versus Geostationary Earth Orbits’ 10-15 years), requiring sufficient short-term demand for consumer satellite broadband. However, despite Low Earth Orbits not necessarily being quite the disruptive business case that they are perceived to be, new entrants can buy the business case through an OPEX-led model. With all this in mind, now is the time for telcos to be aware of the changing market dynamics and new business models that their competitors might be exploring, monitor what moves the new entrants are making, and start collaborative conversations with satellite service providers and the new entrants such as Amazon and SpaceX.

5G: an opportunity but not a revolution

Despite global society being connected now more than ever, broadband rollout is a challenge in densely populated areas, as many operators are struggling to scale and densify networks at the same rate demand increases. There are also scarcely populated areas where it is difficult for broadband to access. For example, in the capital cities of India, broadband use is high, but usage in rural areas is amongst the lowest in the world. While it will be many years before 5G networks deliver dependable coverage in urban areas and reach into rural areas, satellites can potentially help to fill the gaps, particularly for highly distributed enterprise IoT needs.

While satellite players hope that 5G will present the opportunity to boost their profile with MNOs, undoubtedly this will be a long process. Although there has been interest from telcos in partnering with the satellite market, it has been slow and predominantly exploratory. As well as stemming from the recent 5G 3 standards, operators’ interest in this area is also driven by the entrance of new high-profile companies into the market such as SpaceX (Starlink) and Amazon (Project Kuiper).

A guide to non-terrestrial networks

Satellite networks serve a whole host of sectors including oil, hospitality, lotteries and emergency response. These are usually part of extended wide-area networks (WANS) that operate as a mix of terrestrial networks, wireless and satellite. They deliver essential services such as point-of-sale transactions, training through cloud-based services, and inventory control.

Figure 2: Overview of the NTN ecosystem 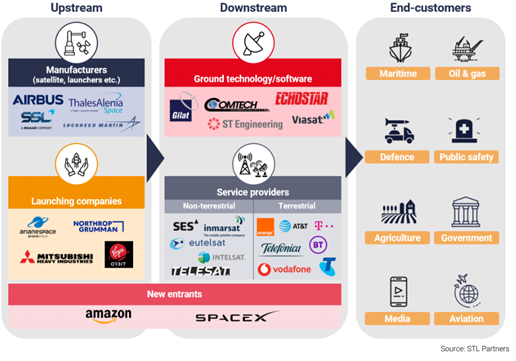 5G has put the satellite market on the map

Through our research it has become apparent that both SSPs and vendors agree that 5G has made SSPs relevant. SSPs now believe that 5G will enable them to serve a host of new applications, while MNOs largely see satellite connectivity continuing to serve their traditional of strength. However, as the use cases shown on the right of the diagram below are not well defined. This means there is not necessarily an obvious need for satellites yet and it is unrealistic to have aspirations in these areas. This could change if a clear pain point in the use case is being addressed in such a way that telcos consider it best to build out the capabilities themselves.

Figure 3: SSPs believe that 5G will enable them to serve a host of new applications 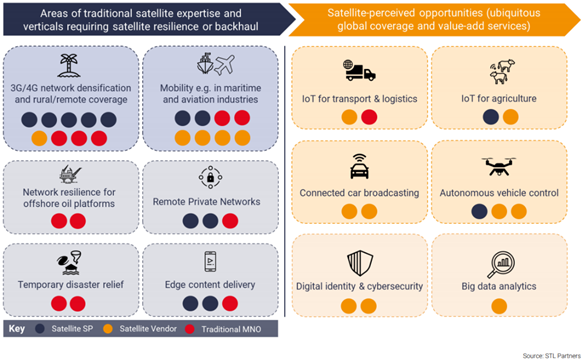 However for now, terrestrial solutions are the preferred option

We believe both telcos and SSPs will benefit from building alignment to ensure they are well-placed to capitalise on the opportunities promised by 5G. As a result of this research, and taking into consideration the perceived challenges of non-terrestrial solutions, STL Partners suggests the following to SSPs: