The key themes of the Advertising and Marketing Services session at the 9th Telco 2.0 Executive Brainstorm were that mobile marketing is developing diverse new formats (e.g. via Apps), but that there are also still plenty of opportunities to use existing formats like SMS in new ways.

The presentation and case studies below are from Google’s big new acquisition, AdMob. They explore how new ‘richer’ content media formats, such as Apps, are catching the imagination of the advertisers. One of our key themes is that these richer media present only part of the opportunity, and that there is much that can still be done with existing, near-ubiquitous formats like SMS.

As further background on this we’ve summarised our take on the market context of these developments in our recent report Mobile Advertising and Marketing: Operator and Market Growth Strategies 2010 from which the following chart showing the relative strengths of different formats is extracted, and shown a detailed worked example of practical way to leverage existing assets in the briefing Mobile Advertising and Marketing: Text-based Local Search Use Case. 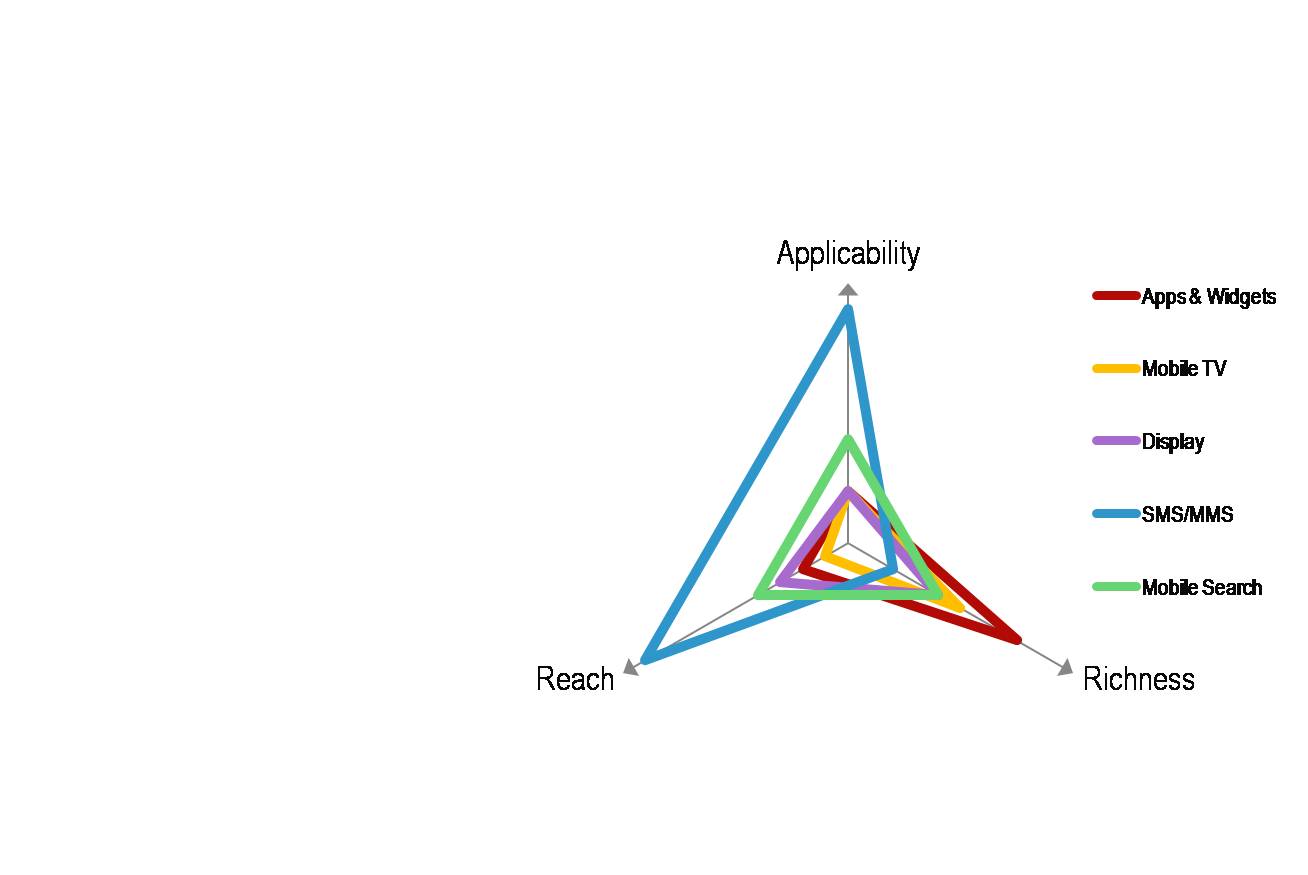 The rest of this post summarises our take on the presentation by Russell Buckley, Chairman of the Mobile Marketing Association and now VP of Global Alliances with AdMob, that covered:
– The Broadening Definitions and Diversifying Formats of Mobile Marketing, including examples of new types of activity;
– How the boom in smartphones is changing the balance from “push” towards “pull” advertising.

The Broadening Definitions and Diversifying Formats of Mobile Marketing

It’s often tempting to think of advertising as the whole of marketing, and both online and offline, much of the glamour and spend of the industry has traditionally been focused here. However, a problem with advertising is that it is expensive and difficult to measure, and the effectiveness of newer targeted, measurable, and ‘pay for performance’ direct and online forms of marketing, have revolutionised the profile of advertising spending, particularly in the UK.

The same is true in mobile marketing – it is tempting to think of the goal as to be to put an ad in front of a punter. That’s one goal, but the reality is much more complicated, and there are many ways in which companies can attempt to bring their brands into contact with the consumer.

One of our main take-outs from the brainstorm was that it is important for the industry to take a broad view of what constitutes “advertising”. We’ve suggested, as far back as 2007, that perhaps advertising as such – banners, display, search-based ads – is becoming less important and things like social or automatic recommendation, data analytics, and real-time customer feedback may be becoming more so. In fact, advertising might be another communications-enabled business process And the huge importance of data – especially real-time or near real-time data – was a cross-cutting theme for the whole event.

Russell Buckley, Chairman of the Mobile Marketing Association and now VP of Global Alliances at AdMob, began with a quick overview of AdMob. He claimed that they were serving ads from 7,000 sites and 11,000 apps, and had achieved 165bn page impressions. He stated that the company was happy to work with operators, but that the operators had so far been less happy to work with them. (NB There are some interesting recent AdMob stats on ads served by Google Android )

He described major change in mobile advertising in the last 18 months. Originally, the market, such as it was, had been dominated by operators, primarily selling push media such as bulk SMS and specialised WAP products. This was conditioned by the limited capabilities of the great majority of devices, and the low bandwidth of the data networks. In 2005 it had been SMS, in 2006, graphics; but then, in 2007, the iPhone arrived. 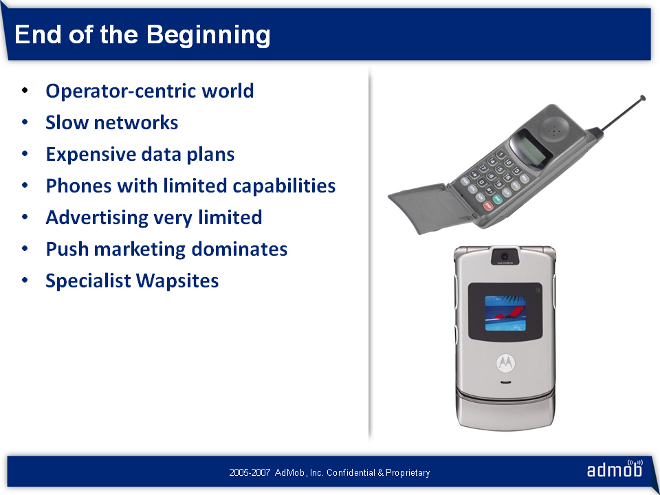 Now, the market was growing fast and was increasingly dominated by pull media – specifically, advertising on Web sites, advertising inside applications, and apps that were created in order to advertise or to facilitate customer interaction with products. This was conditioned by the arrival of mobile broadband and the smartphone boom since 2008. The primary use case was now either in the app environment or in the browser. He likened this to the “transformation of print in the last 100 years.” 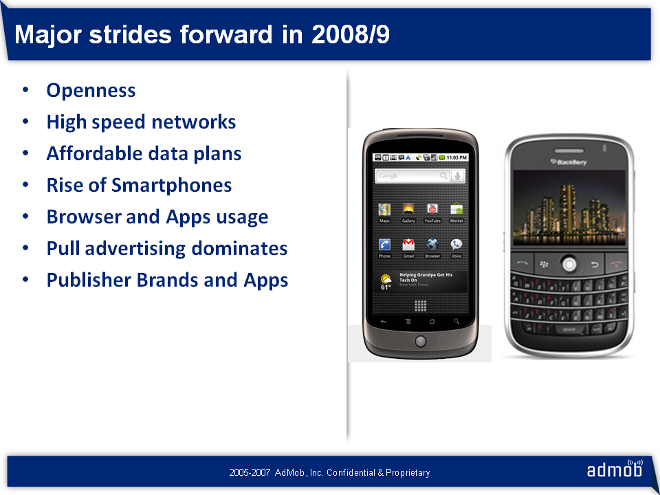 As a result, the industry had recently seen its first $1,000,000 campaign – an important milestone. Additionally, Russell said that location-based services were beginning to happen, and that the broader ‘Augmented Reality’ category would soon be a major market. Most of the problems that remained were ones of admin and operational processes. He cited a major campaign for Reebok as an example both of integrating the ad campaign across multiple platforms, and also integrating it tightly with the sales cycle.

Another example came from Sherwin-Williams, the US paint manufacturer. They developed an iPhone app that uses the device’s camera to match the colour of whatever painted surface it’s pointing at with the company’s colour charts, and return the stock numbers and details of the paints that match as well as the address of the nearest stockist based on the GPS location. In a sense, it’s an example of something that goes beyond “advertising” – it’s valuable to the user in itself, but handing them the exact product ID is an effective way to get them to buy that product. 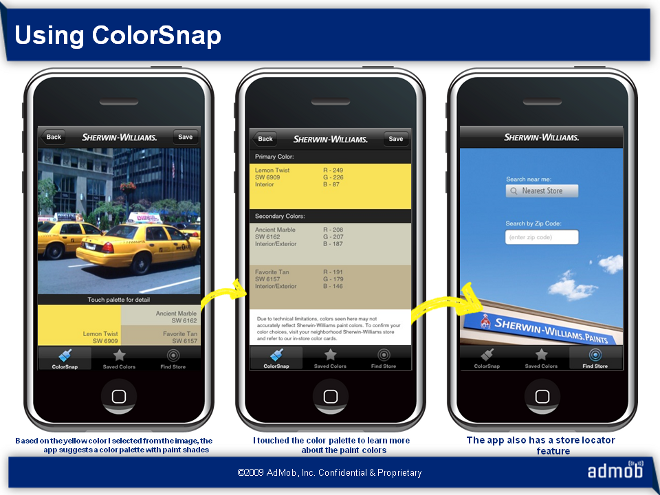 AdMob was commissioned to publicise the app and drive downloads of it. The client bought $15,000 of text ads targeting the iPhone customer base in a concentrated two-day burst campaign, and the application went from being the 70th most downloaded in its App Store category to being the 18th most downloaded, representing an increase of 500% in daily downloads and a 1.08% click through rate. The campaign also succeeded in creating stickiness as although the download run rate fell back from the peak level achieved in mid-campaign, it remained more than double what it had been pre-campaign. This represented increased discoverability on the App Store due to the higher ranking. 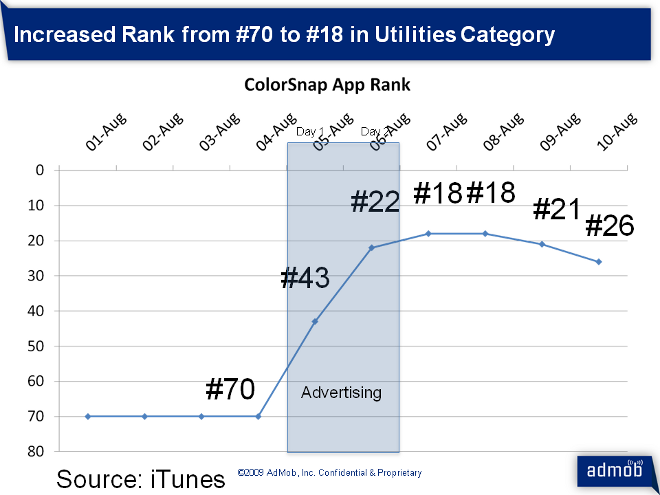 Buckley finished by remarking that, for the so-called “next billion” consumers in the emerging markets, their first contact with electronic media (and for a nontrivial percentage, even with print) would be on a mobile device.

We will be exploring the issues of the benefits of ‘push v pull’ marketing in all its flavours, how consumer data could be used and monetised in practice, and what ‘Augmented Reality’ actually means in our future analysis. We’ll also be featuring more case studies on mobile marketing in Best Practice Live! on 28-30 June 2010.