LTE (‘Long Term Evolution’) is a new high speed radio network technology standard which is designed to increase the speed and capacity of mobile networks. A good idea in principle given ever increasing demand and current fears of networks choked with mobile data. But is it a viable technical and commercial proposition compared to other strategies, particularly in today’s tightened economic environment?

In a previous article on LTE in mid 2009, another Telco 2.0 partner, Arete Research, expressed the view that LTE would prove ‘Late, Tempting and Elusive‘, and from the vote below, delegates at the 9th Telco 2.0 Executive Brainstorm in London in April 2010 seemed to agree, seeing returns from LTE as a five to ten year proposition. 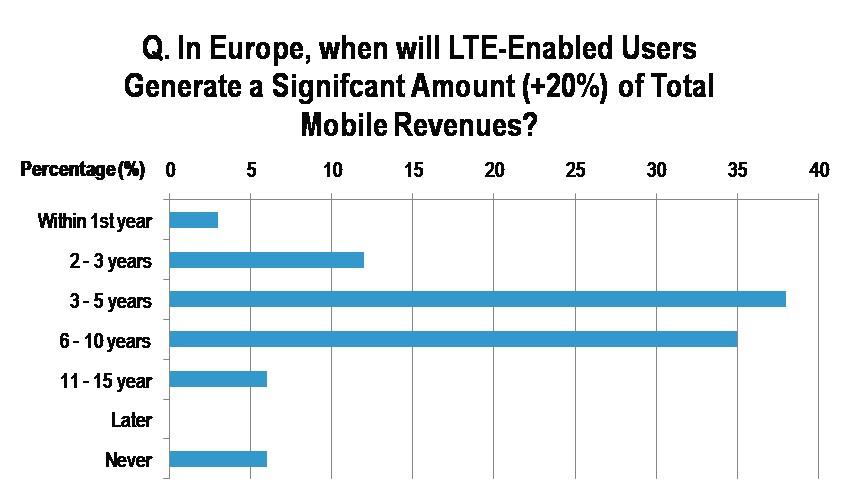 Source: Delegate Vote, Telco 2.0 EMEA Brainstorm, April 2010, London.
But what was the view from the summit?

The LTE World Summit in Amsterdam was a rather contradictory affair, with optimism and pessimism available in fairly equal measure. Early feedback from trials and the first small “commercial” deployments gave some reasons to believe that LTE will ‘work’. Unanswered questions about the performance and availability of spectrum, how voice over LTE will work, business models and availability of devices pulled the tone back again.

Given that the 3GPP had co-sponsored the event, and there was heavy representation from organisations such as the GSA and GSMA, it was possibly leaning towards a triumph of evangelism over reality. It was very striking that the agenda had very few dissenters and LTE-sceptics; it felt as though there was a distinct lack of balance in the debate, with far too many controversial issues being positioned as fait accompli by vested interests. There was also a heavy presence of both cheerleading vendors and operator technical staff rather too enthused by the “coolness” of the latest and shiniest acronym and the associated bragging rights of early deployment.

On the upside, there is growing evidence that at the basic level, LTE “works” quite well. In trials and very early friendly-user deployments, it does indeed give some pretty punchy maximum speeds (up to about 90Mbit/s in one example) and lowers latency dramatically. There were also some indications that LTE’s principal competitor, HSPA+, is struggling a bit to achieve its theoretical maxima – especially using the multi-antenna MIMO technology, which is proving difficult to justify in the real world.

There was also a strong sense of the breadth of enthusiasm for LTE – there were numerous conventional GSM/HSPA operators looking to upgrade, most of the CDMA camp looking to shift across, one or two greenfield start-ups and even a couple of WiMAX operators thinking about switching sides. It is now indeed looking like the unified long-term option – although exactly how long-term remains a matter of some uncertainty (as characterised by the spread of views in the Telco 2.0 Delegate Vote above). There was some suggestion that eventually we may end up a harmonised world with 2G/GSM plus LTE, with 3G being squeezed out in the middle, between data-centric devices and cheap basic voice phones that are likely to last until well past 2020.

(Full marks, by the way, are due to NTT DoCoMo – the only operator purist enough to refer to LTE correctly as 3.9G, and making reference to “real 4G” coming later, when the ITU decides what it is. Everyone else was clearly being driven by their marketing teams to round up 3.9 to 4 regardless).

One negative aspect of the story was easy to read – the proliferation of frequency bands is clearly going to be a huge headache for everyone, with as many as 20 options now on the table worldwide. Given the initial small volumes of device shipments, this does not bode well for manufacturers and component suppliers looking to gain scale economies – which is likely to lead to knock-on impacts on pricing and performance.

Many presenters from early-adopter networks were trying to drum up wider support for their favourite frequency bands for LTE – 900MHz, 2.1GHz and so on. Worse still, the largest and most-favoured “new band” for LTE in Europe (2.6GHz) was described by one operator running a trial (O2 UK) as being “very disappointing” in terms of coverage. This is yet more bad news for voice on LTE in particular – another area of pain that seemed to be given a superficial sheen of “do-ability” by some presenters.

That leads on to the next point. In all probability, LTE-only networks are looking a very long way off, at least until Digital Dividend frequencies around 800MHz are released from TV usage. In any case, the actual available amount of 700/800MHz spectrum isn’t really enough for multiple competing operators wanting to do “full” 20MHz-channel LTE.

There is thus a very high likelihood that any LTE network will just be an overlay for “hotspots” on top of existing 2G/3G technologies for the foreseeable future. Maybe some cities will get completely covered, but indoor penetration may be problematic without femtocells or WiFi offload. This means that there is really no opportunity for specific “LTE Business Models”, or various supposed “LTE-only Applications” that were highlighted in various vendors’ cringe-worthy videos. Pretty much any LTE-capable device and end user will be spending a good proportion of their time on ‘good old 3G’ connections for the foreseeable future.

To be fair, this was an LTE conference, so it was perhaps unsurprising to see the idea of ‘impure’ HSPA/LTE hybrid networks being downplayed.

There was a lot of discussion around the concepts that Telco 2.0 has expounded for several years – two-sided markets, “indirect ARPU” and various other phrasing being used to cover non-user revenues, either in terms of “slicing and dicing” wholesale broadband capacity, or through the exposure of various network-capability APIs. It is refreshing to see these concepts enter the industry mainstream – even if there was a dearth of real-world case studies and quite a lot of wishful thinking.

M2M and LTE – When Acronyms Collide…

There was also some discussion around M2M and devices – with various numbers being thrown around, such as 50 billion by 2020. We have significant doubts about the relevance of LTE to industrial M2M for the next decade – coverage, low price and low power consumption are key for applications like metering. GPRS will remain the winner among cellular technologies. For consumer products (think iPad or Kindle or camera or car), the situation is slightly different as price points can sustain pricier modules, and there is a need for at least some web/video capability. But again, coverage is likely to be a killer. That said, the US might evolve slightly differently here, because of Verizon’s 700MHz rollout, which should give better ubiquity.

Overall, the event pointed to a growing maturity of LTE as a technology, but one that is definitely suffering from the hype machine. Despite early pilot launches, Telco 2.0 does not expect it to “move the needle” in terms of mass deployment and uptake for several years, let alone revenues. It also seems doubtful that LTE, by itself, will start to drive new business models until at least 2015.

Likewise, attendees at the 9th Telco 2.0 EMEA Executive Brainstorm agreed that optimising existing network capabilities is at least as much a priority as investing in LTE at this point. 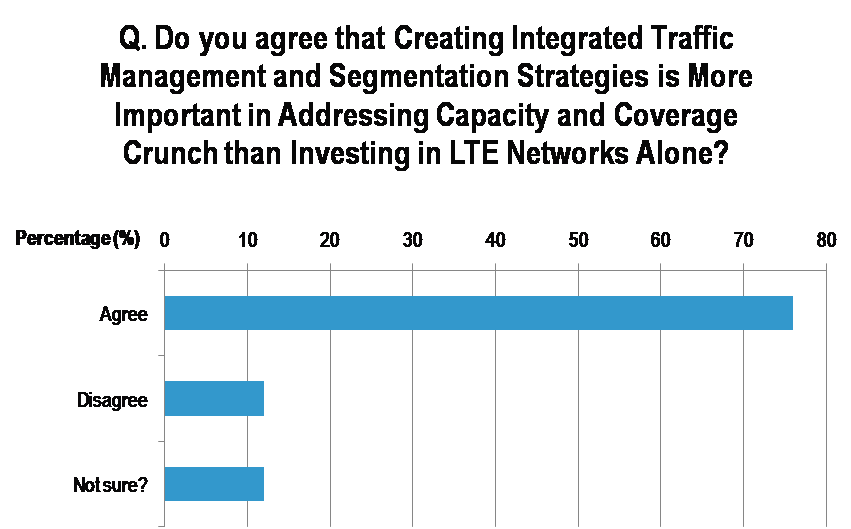 Dean Bubley is a senior associate of Telco 2.0 and regular contributor to its research and events. He is the founder of research & consulting firm Disruptive Analysis, specialising in mobile broadband technology, devices and network infrastructure. For more details, please see: disruptive-analysis.com, and his blog here.