Everything Everywhere, the joint venture between Orange and T-Mobile in the UK, recently announced its Q1 results that give a little further insight into the industry’s journey into the ‘digital hunger gap’.

EE is very proud of adding 166k postpaid subscribers, for a total of 348k since the launch of their LTE network, but the two underlying operators also shed 571k prepaid customers, while the “steady service revenue performance” is steady in the sense of “steadily falling”, down -0.4%, or -5.4% counting the effects of changes to the termination regime.

Importantly, EE is now a majority-data carrier, with 51% of its revenue being non-voice, and 82% of its postpaid subscriber base on smartphones. The problem is illustrated by the following chart: 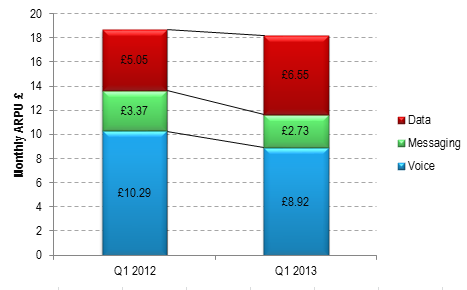 Although data revenues are going up, voice and messaging are eroding fast, and the chief answer seems to be migrating more customers onto the LTE network. The problem here is that migrating them over usually implies supplying a top-of-the-range phone, and therefore a slug of handset subsidy, and also that whatever uplift in data revenue is achieved must both compensate the loss of voice and messaging revenues and also pay for CAPEX as the new network rolls out.

(This said, it’s worth pointing out that there EE decommissioned 548 cell sites in Q1. So there may be savings from LTE deployment, providing that the decommissioning is not instead a result of post-merger network rationalisation.)
The change in user behaviour is well illustrated by the infographic EE included with the results presentation. 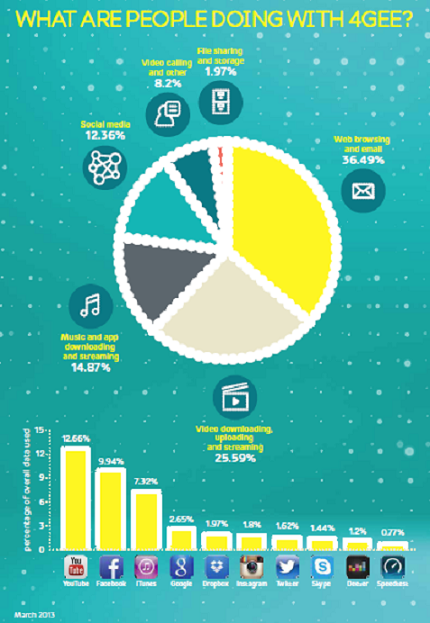 It wouldn’t be quite right to say that the voice and messaging that accounts for 49% of their revenues is hidden in the 8.2% of traffic marked “video calling and other” – having opted to provide 4G voice via circuit-switched fallback, this traffic would be carried on either Orange or T-Mobile’s 3G or 2G networks. But it is certainly illuminating just how dominant general Internet activity, web-based video, and web-based music are.

We’re also a little amused by the fact 0.77% of total 4G traffic is accounted for by Speedtest.net, the 10th biggest single attraction – that’s got to be worth something in terms of publicity.