The latest update of the 5G-aliser, created in collaboration shows that August has been a somewhat positive month’s for the world of 5G – at least, compared to July! A handful of key drivers and making steady progress, many of which are digging themselves out from the slump they have found themselves in in previous months, such as spectrum availability.

However, telcos will not be getting too optimistic about imminent returns on their 5G investments just yet. Major negative factors are once again in the limelight; the US–China trade war, for example, continues to have a major impact across the telecoms industry and shows no signs of stopping. Meanwhile, telcos are gradually beginning to reveal the damage that the coronavirus pandemic has done to their finances. With some parts of the world showing a significant up-tick in infections, the threat of a second wave of the pandemic looms large.

If a second wave does strike, what does that mean for the immediate future of 5G? 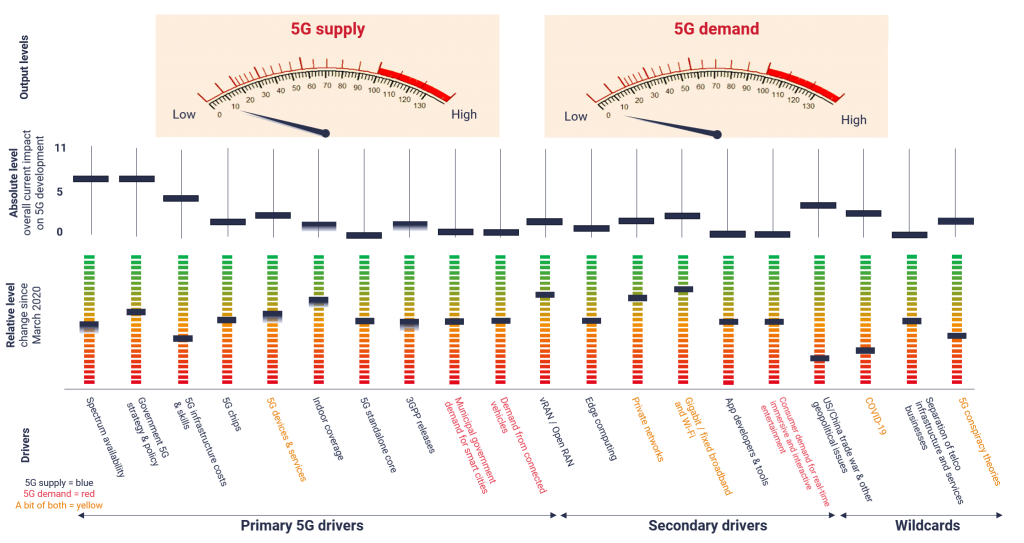 Spectrum availability on the up

As the year progresses, more and more spectrum is gradually being released to the operators around the world. Spectrum auctions, often long delayed, are finally going ahead, such as in Czech Republic. This is especially prominent in the US this month, which has not only seen the US Department of Defense clear 100MHz more spectrum in the 3.5GHz band, but also the completion of the first mid-band 5G auction.

If there is one thing that never changes, it is operators crying out for more spectrum at a reasonable price and many are beginning to get their wish.

As a rapidly growing market, India continues to be an exciting environment for 5G, as well as an inevitable proxy battleground for US–China tensions. India is increasingly phasing out Chinese influence in the telecoms sector, as the government is making it less appealing to work with these companies without introducing an explicit ban. Specifically with relation to 5G, the government gave the green light for telcos’ 5G trials – except for those done in collaboration with Chinese vendors.

If Huawei does gradually lose its place in the Indian market, Reliance Jio’s enigmatic home-grown 5G – if it really is up to the task – could be the perfect domestic solution to fill the gap. Ever the disruptor, Jio has previously stated its intention to sell its 5G solutions abroad if they prove effective. Alongside the likes of Japan’s Rakuten, Jio could find itself be at the spearhead of a group of telcos-come-operators seeking to drastically reshape the 5G ecosystem and operator–vendor dynamic.

mmWave technology sees continued exploration, with a variety of extenders and repeaters being developed to help improve coverage, particularly indoors. This technology is looking increasingly viable and valuable to telcos, being a major focus for operators around the world.

When it comes to 5G devices, this month has seen both some positive and negative developments. On the whole, 5G mobile device availability is improving, with numerous device releases taking place or announced this month. In a similar vein, Verizon has said it will not be charging $10 for 5G as previously announced, potentially making 5G far more accessible to US customers.

On the other hand, according to the latest research from Gartner, smartphone sales are down this quarter, with 5G failing to deliver the commercial driving force some had hoped for. As represented in the 5G-aliser, device availability for 5G may well be increasing, but overall consumer demand for the service still remains low.

One interesting related subject here is cloud gaming, which is gradually being explored by more and more telcos. Facilitated by 5G, Deutsche Telekom launching its own cloud gaming service, MagentaGaming this month, while SK Telecom also announced a similar project with Xbox in South Korea, starting next month. Russian operator Beeline is even using cloud gaming as part of a 5G pilot in St. Petersburg. The cloud gaming industry is taking off at speed, with analysts estimating the industry’s value to climb into the billions of dollars in the coming years. See STL’s latest reports on the size of the cloud gaming opportunity and business models for telcos for further analysis.

However, it should be remembered that while the low-latency is important for a smooth gaming experience, cloud gaming is not necessarily limited to 5G, with a high quality LTE connection capable of taking the strain in many cases.

Geopolitics as fiery as ever

US sanctions against Huawei continue to ruin the vendor’s prospective semiconductor supply chain, with the latest sanctions closing some important loopholes that would allow Huawei to still access US tech through third parties. This month has seen companies, including Qualcomm and MediaTek, approaching the US government for permission to continue to supply Huawei, though whether these appeals will be successful or not remains to be seen.

There have even been rumours that Huawei is making its own chip fab in response to these sanctions, with the project called ‘Tashan’ (translated as ‘daring’ or ‘courageous’), though the Huawei itself has yet to make any official statements in this regard.

The geopolitical battle is undoubtedly as vociferous as ever and continues to reshape the telecoms industry, especially the semiconductor supply chain, leaving it as a major obstacle for the smooth development and adoption of 5G.

We see a similar story with the effects of the coronavirus itself. While operators (and economies at large) are beginning to gain a better understanding of the lasting effects of the pandemic, the crisis has not been particularly transformational this month and remains a long term negative driver.

Sadly, many regions are beginning to see signs of the dreaded ‘second wave’, with COVID-19 cases rising once again. Given their previous experiences, the telecoms world would likely be in a better position to deal with the initial fallout of such a situation, but finances would be even further stretched. As a result, a powerful second wave could see 5G delayed even more than it already is.

Last but not least, 5G conspiracy theories still pose a thorn in the side for operators and society at large, proving that communication around 5G still has not managed to stamp out the by now engrained disinformation.

While arson attacks on 5G towers are seemingly becoming less frequent – or at least, are apparently less newsworthy – some of the conspiracy theorist groups are, in fact, still gaining steam. In the UK, for example, the group Action Against 5G has managed to crowdfund over £100,000, using it to hire a high profile barrister, Michael Mansfield, with the goal of challenging the government over its 5G plans.

Such a development is, of course, highly unlikely to bear fruit, or even to significantly stand in the way of operators’ 5G plans. However, it does prove the extent to which these views are widespread and entrenched.

Overall, this month has seen fairly subdued progress for 5G, with little change in the sectors priorities from the previous months. Geopolitics continue to over overshadow any progress, with the threat of the coronavirus beginning to rear its ugly head once again. However, gradual progress across numerous drivers shows that the technology is continuing to develop at a healthy pace, leaving the sector in a good place for further development in the last quarter of the year. 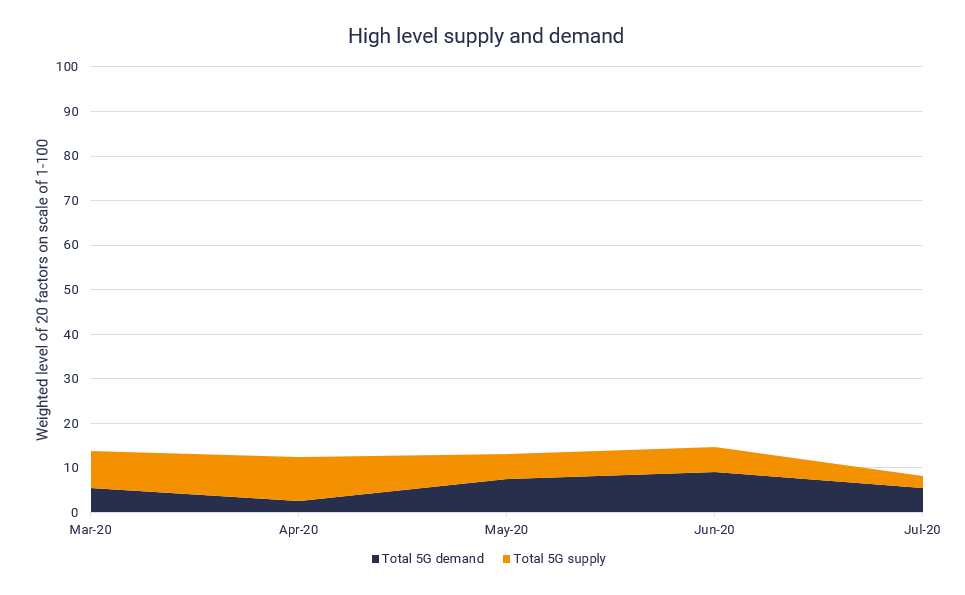 Is 5G going to reshape the world in a rapid revolution or is the next-generation technology overhyped? Find out from the experts at this year’s Total Telecom Congress