One of edge computing’s promises is reducing latency to sub XYZ milliseconds thanks to the benefits of an edge computing architecture. The issue is that different applications have different levels of latency they can tolerate and, since distributed compute architecture is a broad spectrum of potential locations, these applications should be optimised to run at the optimal location.

The question of “where is the edge?” is difficult to answer and is often lost in translation depending on who you are talking to. For gamers, the edge is the end-device or the console, for manufacturers, it is more likely to be on-site within the production facility, for a CDN provider this may be at internet exchange points, yet for the telco community it is within the operator’s network. We have termed this the network edge.

At a high level, the network edge refers to resources for storage and compute closer to the end user somewhere on the telecoms network. The challenge is that each operator has a different topology, which means that although each mobile network is made up of an access, transport and core network, the number of hops it takes for traffic to get through the network is not equivalent across operators. So, it’s not as simple as saying a use case that requires 70ms should reside at a network aggregation point.

Mobile operators are evaluating a range of factors when determining how they should build out their edge computing infrastructure:

Where is the edge for telcos?

Below we have mapped out the potential “level of edge” and where different operators have so far announced they are testing or planned to deploy edge nodes.

Level 1 edge clouds at the cell towers don’t exist yet and may be too costly to deploy – 1ms is in the lab and years away from commercial deployment. Level 2 is exemplified by Vapor’s approach, whose facilities are not at the tower itself, but connected close by which adds about 4ms. BT has also discussed that it estimates 1000 sites to serve 15-20ms. Level 3 is further back in the aggregation or core network, depending on the number of hops, and at level 4 we are the extreme edge of the network connecting to the internet, which becomes almost equivalent to peering points. As operators like Telefonica and Verizon simplify and accelerate their networks, the gap between levels 3 and 4 closes.

But are we getting distracted by latency?

From our discussions with some of the application developers in the augmented reality, CDN and drone space, much of the debate has been around the ability to maintain a certain level of latency and reduce jitter, rather than meet an absolute latency limit.

Unfortunately, telcos do not have a great record of being able to ensure consistent latency. Analysis from June 2018 (below) shows the difference between the mean (average) latency and the median for the UK’s top mobile operators. Although half of the population* actually benefit from latency of below 54ms across all 4 operators, almost 5% suffer from latency of higher than 100 milliseconds.

The challenge for operators in providing edge cloud will be to guarantee a level of service, particularly for enterprise customers who will need to depend on the network and the infrastructure if they are going to use edge for their (mission critical) applications. 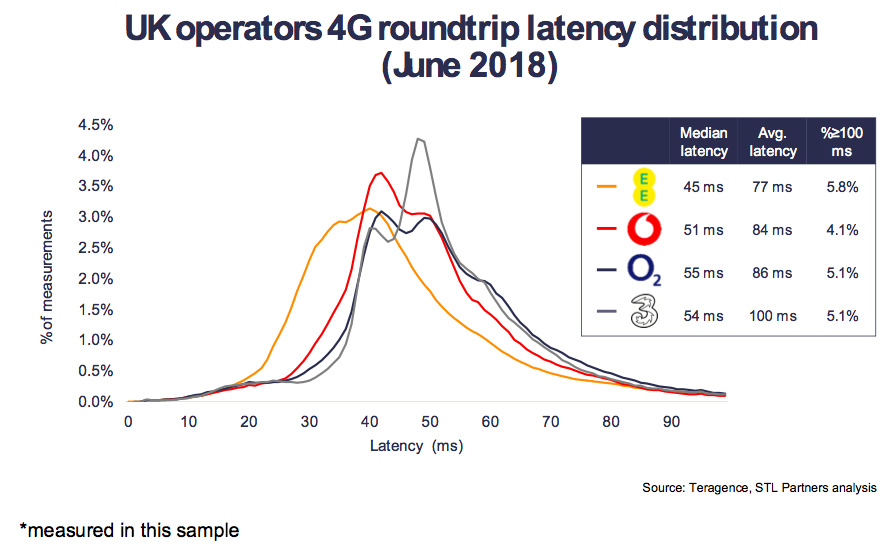