I’ve written before about the difficulty of extracting reality from tech marketing spin. My job is to turn hype technologies (5G, NFV, edge clouds…) into business opportunities. A big part of that is looking at what vendors are saying about their products and trying to figure out how much is possible now, as opposed to some theoretical point in the future.

Under the spotlight at the moment: the claim that “cloud native” is the future of networking technology. Let’s unpick this.

First, we must define “cloud native”.

At its most specific, the term is shorthand for cloud native computing, a software development approach. As the CNCF puts it: “technologies to empower organisations to build and run scalable applications in modern, dynamic environments such as public, private, and hybrid clouds”.

In practice, this means using very flexible software technologies to build loosely coupled systems that are very easy to observe, manage and change.

If you want to get super-geeky about it, there are specific technical methodologies (Twelve-Factor App), and a host of technologies (containers, microservices, serverless functions, immutable infrastructure). But the key thing to understand is cloud native applications are software that was designed from the ground up to run in the cloud.

The problem is that we’re talking about networking, and networking is always a special case.

Carrier-grade networks were never designed from the ground up to run in the cloud. Far from it. Networks are dominated by very powerful but inflexible dedicated equipment – hefty application-specific hardware such as switches and gateways.

Network function virtualisation (NFV) was meant to be a way around that, but it isn’t, largely because it involves simulating the dedicated hardware on a generic computer. It works – and is a great way to move towards software models quickly. But it’s not easy to scale and has no chance of performing as well as a dedicated appliance.

So, the vendor community has begun to push the cloud-native network function (CNF). This means networking apps designed from the ground up as software apps. They’ll run without many of the overheads associated with virtualisation, and therefore be faster, more efficient, more scalable, etc etc etc….

Our data shows that cloud native is not all hype. Cloud native networking deployments are now starting to happen – 5G cores by China Mobile and DNA in Finland; Rakuten’s not-quite-fully-cloud-native 4G network – and more are in the works.

But claiming cloud native to be “the future” is problematic.

First, phase one NFV isn’t going anywhere – it will remain important for at least another few years. Many markets are only now beginning the initial deployment of virtualised 4G core networks (vEPC) and over the next five years we expect a wave of open RAN and vRAN deployments. 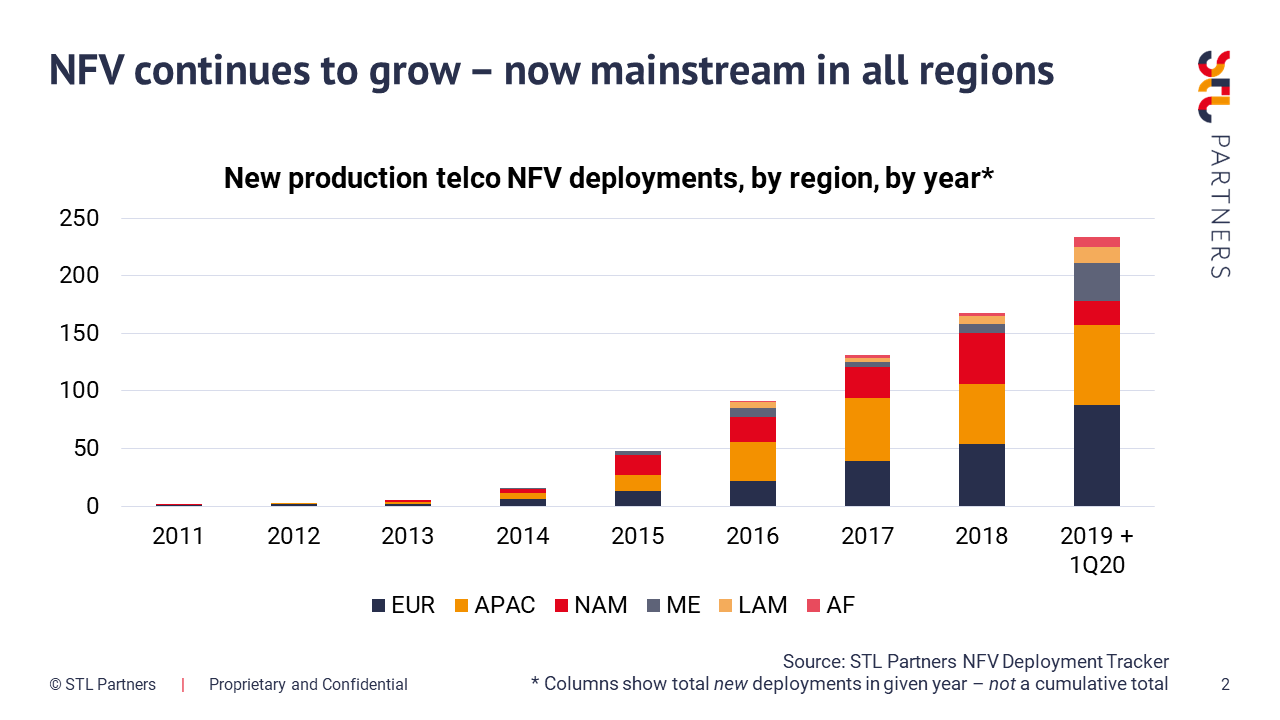 But more importantly, everything that the industry is promising for cloud-native has been promised before. NFV was also meant to be fast, efficient and scalable. Inevitably, in a few years’ time there will be a next step which is even faster, more efficient, and more scalable. IT is easy to conclude that cloud native is simply another phase in the telco cloud journey.

Perhaps a more important question is – will cloud native deliver everything telcos need?

My hypothesis: only if it happens alongside the long overdue opening-up of vendor and partner ecosystems. Cloud native will only truly deliver what the telecoms industry needs if it is “open”, in the loosest sense of the word.

Achieving an open networking ecosystem means a lot must change: more standardisation and automation, deployment templates, frameworks, and so on. Those same challenges held back NFV. The newer tools that are emerging should make this second wave more effective, but it’s too early to say for sure.

Meanwhile, as network functions become pure software, we face a much bigger issue: the convergence of cloud computing and telecoms. No longer will networking be a distinct discipline – and therefore the telecoms industry has the challenge of carving out a new role for itself… More on that in a future post!