Here at STL we spend a lot of time thinking about how telcos can make up for the dramatic drop in voice revenues, in fact, we have been writing about this phenomenon and the need for business model change since 2006.  At the end of 2016 we published a report – Which operator growth strategies will remain viable in 2017 and beyond? – analysing seven different growth strategies used by telcos between 2009 and mid-2016, and came to the conclusion that only one – developing or acquiring new businesses and services – is viable for 2017 and beyond if the industry is to reignite sustainable growth.

This conclusion raises a bigger question: What kind of new businesses and services should telcos be developing, and how?  Our first report of 2017 – NTT DoCoMo: The digital pathfinder – presents NTT DoCoMo as an example for other operators to learn from, as we at STL believe it has made more effort to develop its digital services than any other operator. In fact, NTT DoCoMo realised that it needed to look for alternative revenue sources to voice very early on, in 1999, and has been incrementally developing its digital services since then.

As we can see from the chart below, these services (included in “Other(Digital)”) have not completely made up for the loss in voice revenues, however, the new revenues helped buffer the company’s total revenues between 2008 and 2011 – a critical period in the Japanese mobile market, when SoftBank was the only operator to offer the iPhone in Japan. 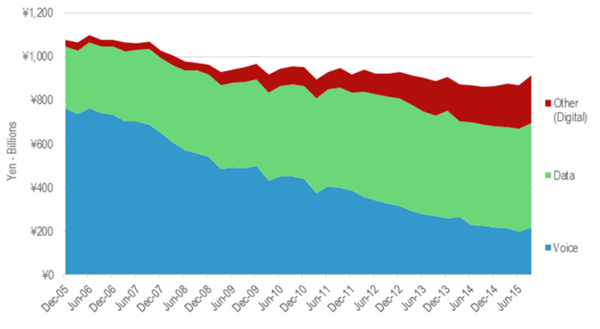 Although NTT DoCoMo’s investment in digital services has helped it replace lost revenues from voice, some people claim that this cannot be replicated in other markets, citing three main arguments:

In our report NTT DoCoMo: The digital pathfinder we analyse and offer solutions to these arguments, as well as providing a detailed examination of NTT DoCoMo’s digital journey and strategy.

For further questions about this report please contact contact@stlpartners.com.